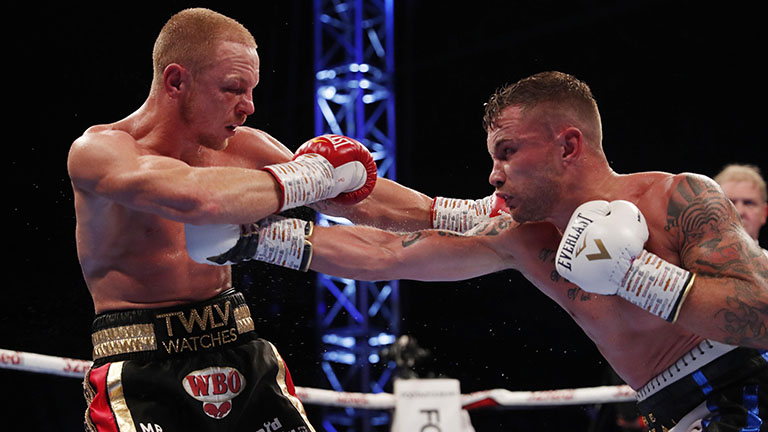 'I still can’t hear out of my ears and my eye is slowly getting better.' Luke Jackson tells Lee Gormley exactly what makes Carl Frampton so good

THE dust has long settled on a dream outing at Windsor Park for Carl Frampton.

On a wet night in Belfast, ‘the Jackal’ treated the 20,000 passionate supporters in attendance to a clinical display and his first knockout win since 2015.

Australian Luke Jackson was the opponent on the receiving end of that ninth-round stoppage from the home favourite, falling short in his first professional fight outside of his native country.

Jackson’s corner may have put an end to the Frampton onslaught when they saved their man with the towel as proceedings unfolded in the ninth, but the challenger from Down Under battled to the end against a former world champion clearly operating on another level.

Two perforated ear drums and a badly damaged right eye later, Jackson was left understandably downbeat over the nature of the defeat but remained proud of entering such a huge opportunity for himself on a massive platform.

The 33-year-old admitted it was the hardest he had ever been hit by an in-form Frampton, including a wind-sucking, well-timed body shot which dropped the Aussie to the canvas in the eighth.

Belfast’s own, who was relentlessly chasing a statement showing on home territory in order to set up another shot at world honours, produced a solid display across nine one-sided rounds before closing the show, leaving Jackson with battle wounds from a tough night.

“I still can’t hear out of my ears and my eye is slowly getting better,” he told Boxing News from a deserved break in Italy with his girlfriend.

“I’m obviously very disappointed and upset that I lost the fight but I put it all on the line. I took a shot at being great and I missed.”

Frampton has long been a top level operator and highly adaptable champion. The Tiger’s Bay native was able to outpoint Scott Quigg previously with a more disciplined display in Manchester, before prevailing in an epic Fight of the Year contender with Leo Santa Cruz as well.

It was a classy performance against Jackson for Frampton, considering the pressure of headlining a stadium card in his own backyard, and he was helped by the guidance of current trainer Jamie Moore, whose coaching reputation is continuing to grow in the sport as well.

Jackson took plenty of big shots throughout, but it was more the execution, technique and ring generalship that impressed the Tasmanian of his first conqueror.

“He is a two-weight world champion so that speaks for itself,” outlined the former Olympian. “His distance is very good and he disguises his jab very well.

“The main thing was his timing and distance. I’m not sure if it was me not being switched on or what, but his distance was very hard to judge.”

In light of three successive victories since that first career setback to Mexico’s Santa Cruz in Las Vegas, Frampton is back on the world title trail and will next collide with Leeds hero Josh Warrington. The Yorkshireman shocked Lee Selby earlier this year in his own summer stadium sell-out at Elland Road, impressively outpointing and dethroning the previously undefeated Welshman.

Frampton has proved he still belongs among the elite members of the division since returning from a slight layoff and the eventual outcome of his imminent pairing with Warrington is dividing opinions.

“It’s a great fight in the division and I think whoever prepares best wins,” Jackson added, giving nothing away in what is set to be a massive match-up in a thriving featherweight division which also features WBC titlist Gary Russell Jr and WBO champion Oscar Valdez.

While Frampton will move on to contest for Warrington’s 126lbs strap, Jackson is hoping to get back to the gym and fight once again as soon as the injuries of his last outing have subsided throughout the remainder of the year.

While Jackson plays the waiting game over his remaining battle scars, the man who inflicted the damage is now preparing himself for a world title pursuit later in 2018, as Frampton aims to unseat IBF belt holder Warrington and secure another prominent feat in his already illustrious career.