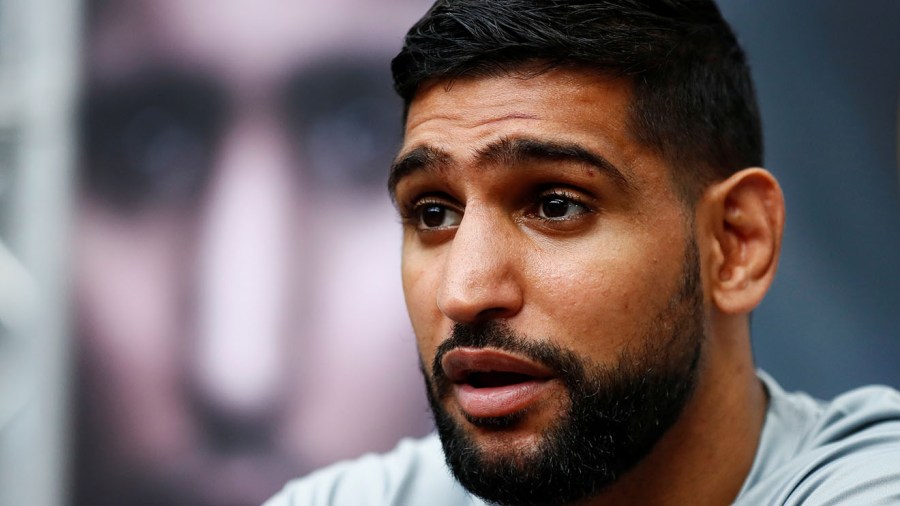 And does Dib have any chance? Matt Christie examines the curious Amir Khan card in Saudi Arabia

IN last week’s issue of Boxing News former heavyweight contender Gerry Cooney had some advice for Anthony Joshua following his crushing defeat to Andy Ruiz Jnr: Get back on the horse quickly.

This Friday (July 12), atop a bizarre card thrown together by moneymen in Saudi Arabia, Amir Khan takes on Billy Dib a mere 12 weeks after taking a blow to the groin from Terence Crawford in New York and signalling enough was enough. However, to go from the all-conquering Crawford to Dib is not so much falling from a horse and getting back on, but falling from a horse and landing on a mouse who was happily having a nap until Amir Khan fell on him.

Because Dib, though a former IBF featherweight champion, is so small and off the world class pace, the only way to describe this one, at least at this stage and on paper, is as a mismatch. Trundling through obscurity when the even more overmatched Neeraj Goyat was forced off the show due to injuries sustained in a car crash, Dib – a once familiar face to hardcore fans – was offered the chance to step in at three weeks’ notice. With a scrap against Manny Pacquiao still supposedly in the offing for Khan, apparently to be staged in Saudi Arabia if the Filipino veteran gets past Keith Thurman on July 20, then Dib is the fall guy hired to make such a contest seem appealing.

Thirty three years old and without any experience of dealing with top welterweights, or even lightweights for that matter, Dib is the kind of quick fix seemingly destined to break even quicker. Though unquestionably plucky, he has been declining since 2013 when he lost for the second time to the same Evgeny Gradovich (l rsf 9) who was later thrashed by Lee Selby. Throw in the 15-1 underdog’s size – he’s never ventured beyond super-featherweight at world level – and Dib would appear to have no chance whatsoever of victory.

Even less chance than Khan, 32, was given on that April night against 147lb supremo Crawford, in fact. And that outing, and more pertinently the accusations that Khan was shot that came before it, must be considered when dissecting the potential outcome inside Jeddah’s King Abdullah Sports City. Because if we’re going to highlight why Dib has no chance, it’s only decent to the mention that Khan – himself in the midst of a tumble from much greater heights – has never been someone to stake the mortgage on, even when he was at the peak of his considerable powers.

Khan, the recent Crawford outing aside, tends to perform better when he’s anticipating a tough fight. But when he’s expected to win, particularly when he’s expected to win at a canter like he is here, the 2004 Olympic silver medallist can have a little too much faith in his skills and lose all focus on staying out of harm’s way. Early scares against Willie Limond (w rtd 8, 2007) and Michael Gomez (w rsf 5, 2008) are cases in point but perhaps better studies for Dib and his team would be the struggles with Julio Diaz in 2013 and, even more damning, last year’s 12-round points win over Samuel Vargas.

Throw in evidence collated from the sixth-round loss to Crawford (because, after all, you’re only as good as your last fight) and in Khan we have a fighter teetering on the edge of retirement. Though he performed decently in spurts against “Bud”, his footwork was so poor at times it must surely now be impossible for even the Englishman’s most ardent fans to deny that his best days are long behind him. And though his famed hand speed was evident, it lacked the fire of years gone by. Furthermore, all of this came after a long camp with trusted trainer, Virgil Hunter. Make what you will about the fact that the ferociously honest Hunter has been replaced by emerging coach Clarence “Bones” Adams in the corner for this one.

Khan – set for a whopping £7m payday – is bloody-minded and he will tell you he can still produce his best form even in the face of watertight evidence to the contrary. Behind the scenes, though, one wonders if the nature of his reverse to Crawford (the most damning defeat of his career, even if you include the one-round loss to Briedis Prescott in 2008) has left him asking some serious questions of himself.

Dib, in contrast, might be buoyed following an April one-round blowout of unknown Surachet Tongmala which was a bounce back of sorts from a 2018 wide points loss to Tevin Farmer in a bout for the vacant IBF super-featherweight strap. Indeed, if you compare Dib’s loss to Farmer with Khan’s to Crawford, then the underdog will likely feel a lot better about himself than the favourite.

So, it might follow then, that Khan-Dib is not the mouse-mauling affair we anticipate. Though it’s tempting to point to Khan’s 2018 one-round thrashing of Phil Lo Greco and say the former IBF and WBA super-lightweight boss can still produce explosive power when required, making such an assumption that Dib will fold in the same way would be doing the outsider’s experience, schooling and boxing fundamentals something of a disservice. And though Dib is making quite a leap in terms of mass, his reach and height are just an inch shorter than Khan’s. The real question marks about Dib, given his decline is at least matched by his opponent’s, must be how well he’s trained for this given the short notice he’s had and how seriously he’s taking it on this curious Saudi Arabian stage.

It would seem two outcomes are likely. One is that Khan is simply too big and fast for Dib and overwhelms the Aussie within the opening four rounds. The other is that Amir is drawn into the kind of firefight he’s all too familiar with. One where his knees buckle and his head rocks back while commentators question his place in the sport today. But one where Khan, who has been training at a high level for most of the year, will again prevail – perhaps when Dib’s corner concede that their man’s energy levels are all but gone – sometime after the eighth round.

If one can make a case for Dib exceeding expectations then the same cannot be said for Nigeria’s Samuel Peter, the heavyweight veteran who takes on Manchester’s Hughie Fury in a 10-rounder on the undercard. This, frankly, is a diabolical bit of matchmaking that should not have been sanctioned. Peter, advertised as only 38, has been damaged goods for years and will likely be stopped as and when 24-year-old Fury decides. For those who like a flutter, the under four rounds option is exceptionally tempting.

Also on the bill is London-based southpaw, Prince Patel. The cocky and disrespectful 26-year-old, 19-0-1 (14), has got up so many noses it’s a wonder he can breathe through the phlegm and snot. If Patel can’t find the right punches to take out Venezuela’s Michell Banquez, 18-1 (13), early, this could turn into a gruelling 12-round affair.

The action is being broadcast in the UK by Channel 5.

The Verdict Dib is a late replacement designed to make Khan look good. Whether he will or not remains to be seen.