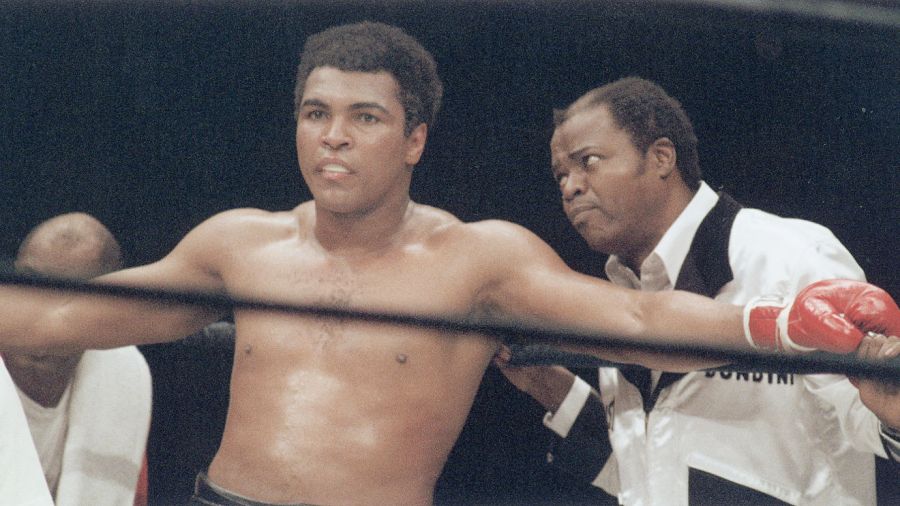 FANS of Muhammad Ali will be familiar with photographs of “The Greatest” with his mouth wide open, raising a certain number of fingers to illustrate his prediction for which round the next opponent would fall. At his side would often be the excitable Drew Bundini Brown. He worked with Sugar Ray Robinson for a number of years in the late Fifties and early Sixties and first encountered Ali – then Cassius Clay – in 1963. By the following year, when Ali challenged Sonny Liston for the world heavyweight title, Brown had built such a rapport with the emerging superstar that he was invited to work Muhammad’s corner in that famous challenge when he became champion for the first time.

“You are a heavyweight Sugar Ray,” Brown old Ali after he’d struggled to beat Henry Cooper in five rounds in 1963. “You’ll beat Sonny Liston, all right.”

Brown had never worked in any professional fighter’s corner before that monumental triumph. The famous rhyme, Float like a butterfly, sting like a bee, was the brainchild of Brown. A motivator of the highest order, a hype man, but also, as Bundini – Believe The Hype by Todd D. Snyder proves, an exceptionally complicated man and the orchestrator of exceptionally complicated relationships.

“It was like a marriage,” Jonathan Eig, author of Ali: A Life To Me, tells Snyder about the Bundini-Ali alliance. “It was maybe Muhammad Ali’s best marriage. Ali, like all great jazz musicians, was a great borrower. That’s one of the reasons he kept Bundini all those years. Ali didn’t write those poems, Bundini came up with many of them. Ali borrowed what he needed from Bundini.”

Alex Wallau is not so kind. “Bundini, to me, was the most obvious exploiter [of Ali],” Wallau once told Thomas Hauser. “I’m not saying he didn’t have genuine feeling for Ali, and he was an entertaining guy, but Bundini knew no limits when it came to exploitation.”

Indeed, Bundini – who died in 1987 – was not without faults. A heavy drinker and far from the perfect husband to Rhoda Palestine, his memory is still nonetheless adored by his son, Drew Timothy Brown III, who plays a huge and welcome part in this book. We hear clues about Brown’s wandering eye. Loyalty, perhaps, was a constant struggle for Bundini. When George Foreman defeated Joe Frazier to win the title in 1973, the new champ was greeted by Brown in the aftermath.

“Bundini got in big trouble because I fought Joe Frazier and there Drew Bundini was, screaming and cheering, proud of me,” Foreman explains in the book. “Ali found out about it and suspended him because of that. Ali thought he was shouldn’t have been there, crying and everything. When I dethroned Frazier, Bundini looked at me and said, ‘the real champ is back’.”

But Ali and Bundini Brown would work together in 44 of Muhammad’s 61 professional outings. The book reveals Brown’s fears for Ali before the first Ken Norton fight. Yet after that upset loss, Bundini went to work. “Howard Cosell is predicting you’re finished,” he said to Ali afterwards. “He’s saying that three-and-a-half years’ exile took too much out of you. The sucker is taking you cheap. Only yesterday, he was saying how great you were.”

Ali went on to win the rematch and then regain the title from Foreman. “The only bad thing I can say about Bundini was that he was never in my corner,” Foreman said. “But then that too would be an inaccuracy because deep down I knew he loved us all.”

But Bundini’s love for Ali can be questioned by his participation in the final fights, the ugly spectacle against Larry Holmes in 1980 in particular when Brown is screaming for Ali to be given one more round as Angelo Dundee signals enough is enough. “Aside from the obvious allure of another big paycheck, one last dance in the spotlight, Ali’s team was, in many ways, agreeable to the fight because they were blind to the realities of the situation, largely because of their unique relationship to each man,” Snyder writes. “They’d watched Ali handle Holmes in the gym for a decade, they’d grown accustomed to thinking of Holmes as Ali’s hired hand. Their overconfidence, the result of a remarkable career of logic-defying upset victories, was an unfortunate by-product of their past.”

That was all but the end for Ali and Bundini Brown. This book goes some way to resurrecting what was one of the most enduring and important relationships of Ali’s entire career.

A recommended read brought to you by the excellent fight publishers, Hamilcar.