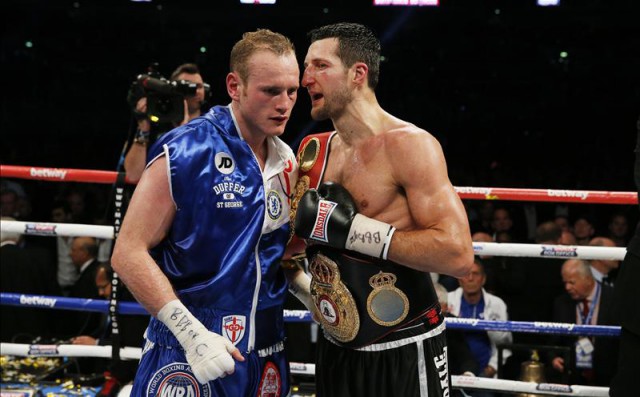 What can Carl Froch and George Groves do differently from their first fight to ensure rematch success? Their former opponents make some suggestions

I’VE watched the first Carl Froch-George Groves fight twice. Carl Froch put pressure on well and used the long left but Groves is a fast fighter and I think Froch was way open when he went forward. Groves is a good counter-fighter with fast hands and he’s a hungry, young guy. But the problem with Groves was that he used a lot of power in the first seven-eight rounds because of all the people watching and that it was his first time in a big fight. He was too tight.

I sparred Groves before my own second fight with Carl and I noticed he is good at coming around you, he’s fast. You’ve got to be fast back, when he throws, you have to throw back but very fast too and keep your hands up at all times.

I don’t know if he took Groves as an easy fight. He didn’t seem to know how to fight Groves at the start but he also got knocked down early and it takes a big mentality to get up and fight on, especially with 11 rounds to go. He got stronger and stronger with each round, while Groves got weaker.

If I was Carl, I’d work on my handspeed, I’d watch the first fight a lot. Also, in the first contest, often Carl threw punches from both hands over Groves’ arms – and Groves then slips under Froch’s arms. Maybe he should throw under Groves’ arms from the start. But for Carl, the main thing is getting serious, because I don’t know how much he put in the first time.

As for Groves, he should not be so tight, he must try to relax more and find Froch’s weak spot. He did good, his reach isn’t as long as Carl’s but he still hit him a lot from the outside, but he shouldn’t take all his chances this time. He used a lot of strength in the first half, he really wanted to hurt him – and he did – and he won a lot of rounds, but he can’t do that for 12 rounds. That’s where experience kicks in. He has to pace himself. When I throw shots at Carl, he always wants to throw back, but I know he won’t have as much power at the end of the round. You can always tell yourself, ‘There are a lot of rounds left’, but when you’re young you don’t think that way.

FIRST and foremost, Froch’s biggest mistake was underestimating the speed and power of Groves. He started far too slow as he has done in many fights. I have screamed at the television as a fan, ‘Why are you giving rounds away?!’ He was also too attackminded, throwing punches with no regard to what was coming back. If you have the balls to stand and throw at the same time as Froch, you can have success, and that’s exactly what Groves did. Froch was throwing the third punch of a four-punch combination when the right hand that dropped him landed; as he was on the way down, he threw the last shot.

Froch stuck in there, took a hell of a beating and he has my complete respect, to do eight rounds on autopilot and then still beating Groves – who was at his very best – needs applauding. He never recovered from that knockdown, in the post-fight interview he had to be told he’d been dropped.

What impressed me most about Groves’ performance was that he did what he said he’d do, he gave his tactics away confidently because he knew Froch wouldn’t have an answer. He couldn’t match Groves’ speed or explosiveness with the jab.

Adam Booth hit the nail on the head on Ringside, he said Groves got too greedy, he landed a lot of punches and so wanted to land even more. He should have conserved energy; by the eighth the sting in his punches had gone. It’s the way he trains and fights, to be explosive, but in between he needs to save energy.

If I was Froch going into the rematch I’d focus on not getting caught early and I’d start as I mean to go on. Don’t commit to Groves, let him make mistakes. Groves feeds off mistakes – lazy jabs or one-twos then dropping the hands. Froch must stay tight and make Groves lead. Keep in the early rounds and make Groves work at a good pace. If I was him, I’d go on the backfoot, which he can do. He was a top-class amateur and he did it against Arthur Abraham.

If I’m Groves and think how he does, I’d want to do the exact same as last time because it worked. But if I was his coach I’d tell him to box and conserve energy. Don’t head-hunt, get gung-ho or look for the knockout. Just get rounds in the bank. When he was stopped, he was only slightly up on points. He should go out to win rounds clearly but conserve energy for the inevitable Froch onslaught.