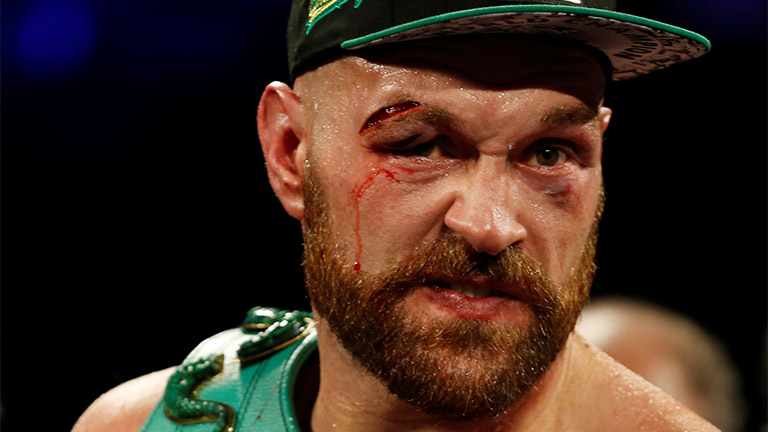 There are no good cuts in boxing.

The worst ones are when they are just underneath the brow. You’re more or less on the bone then, you haven’t got a lot to work with and the blood is going to run into the eye.

With Tyson Fury, the big one was down the side, so at least the blood wasn’t running in the eye. Also, whenever the gash is that big, you can normally get the whole stick in. That doesn’t mean it’s easy to stop the flow, but it does make it easier.

The one on Fury’s eyelid was a bad one. They always are in that place. What are you going to do? Poke their eyeball out? That’s the problem. It’s not easy to get to.

The main thing to do in a situation like that is to not panic. As a cut man, you just want the corner to shut up and let you get on with it. In the words of Ernie Fossey, “What are you worried about? Running out of blood?” If you come at it from that angle, that takes a little bit of the pressure off.

All cuts are different, though. They’re in different positions, on different faces and they happen in different situations. You can never draw on a previous experience to help you with the latest one. Everything changes.

Sometimes you’ll get a really jagged cut and you can’t get the whole stick in. It’s up and down in sort of a Y shape. Others are easier to get to and deal with.

So long as you haven’t got a clown in the corner, you’ll be okay. And so long as that clown doesn’t tip a load of water over the boxer’s head, you’re ready to get to work. The worst thing is when you’re putting adrenaline in and the trainer is washing it away with water because he’s panicking. It’s their claim to fame, isn’t it? They figure out where the camera is and they want their moment.

In the end, good referees make good cut men. That’s another Ernie Fossey quote and it’s the be all and end all. If it’s a simple bleed and the referee stops it, he’s the biggest idiot in the world. But you might get a referee who goes the other way and lets a fight go on too long. The good ones get it right and allow a good cut man to do their job.

I can’t pull a fighter out. It’s not my decision. That’s down to the referee and the chief second. But a couple of times I’ve seen a boxer come back to the corner and I’ve looked at the referee and shaken my head. When the eyelid is hanging off, you don’t need anybody to tell you a fight should be stopped.

Normal gashes are different. I remember doing Tony Bellew’s fight against Roberto Bolonti and initially I could have got my thumb in Bellew’s cut. I look at it now and think, Oh my God. But the thing is, although it was wide open, I could get all the adrenaline in it. The problem there was someone in the corner screamed out it was a headbutt and Victor Loughlin, the referee, wasn’t too pleased. He just said, “No, it was a punch.”

That’s just common sense. It’s not bias. He was winning the fight and I could control the cut. That’s why the fight continued.

Once the fight is over, so long as the doctor cleans it out, the cut will heal fine. They do that with their own solutions. Otherwise, if they don’t, what will happen is the skin will heal but the muscle tissue underneath won’t. That’s why years ago you used to see boxers with those horrible welts.

From there the good doctors will then stitch it inside. It’s not just stitched on top, it’s micro stitched inside as well. That is basically what you need and I’m sure that’s what will have happened with Fury.