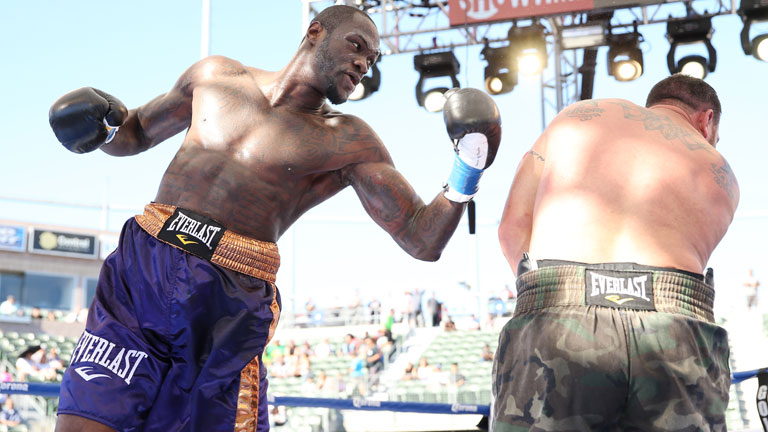 IF Tyson Fury’s victory over Wladimir Klitschko last year upended the heavyweight division, it is now rapidly fragmenting. After fighting no one of note and competing in less than three rounds of a world championship, Charles Martin is now one of three world heavyweight champions, holding the IBF title so rapidly stripped from Fury’s waist. It’s not Martin’s fault that Vyacheslav Glazkov’s knee collapsed beneath him and “Prince” Charles had opened his account brightly in the fight. But Martin is going to be a man in demand. A lot of heavyweights are going to be eager to relieve him of his quickly won belt.

Perhaps Deontay Wilder will be at the top of that list. We’ve been waiting a while to find an answer to the question: is Wilder any good? I fear we’re starting to get one – not very. This time last year Deontay became the WBC heavyweight champion. He showed promise then but stepped down to easier opposition and has consistently struggled with them. Granted Artur Szpilka was better than Johann Duhaupas and Eric Molina, and trainer Ronnie Shields has clearly been doing a good job with the Pole, Szpilka however is still comes below Bryant Jennings, who halted Artur, in the pecking order. Wilder, a WBC titlist, with mandatory challenger Alexander Povetkin looming ahead of him, should have dealt with him better.

Wilder’s jab, which had looked a good weapon when he won the belt from Bermane Stiverne, was tentative on Saturday and didn’t hold Szpilka off. His footwork was unimpressive, he didn’t seem move much. (He did though withstand the punches Artur slung at him, so Deontay does have a good chin.) Wilder by name, wild, or certainly inaccurate, by nature. He put a lot behind his punches but flung them out of range, off balance and too often wide of the mark. His saving grace though is his power. He dug himself out of a bind with a shuddering one-punch knockout. He hits hard enough to finish anyone but increasingly it looks like he’s going to have to rely on his power.

Which makes it all the more confusing when he calls Tyson Fury “a phony”. He is by far the most credible of the champions and clearly is the number one in the division. Fury did after all dethrone the world’s leading heavyweight, Klitschko on his home turf. Clearly Wilder didn’t take too kindly to Tyson hopping into the ring to rain on his parade and Fury too grew increasingly agitated. A heavyweight unification featuring these two big personalities would do brisk business. It would take a while to come to fruition. Wilder’s mandatory, Povetkin looks a real threat to him (though at least Deontay has size on his side). Perhaps he would be best served going for IBF champ Martin, even if that did mean having to shed his WBC crown.

The new/old wildcard in the heavyweight division is David Haye. After a three year long hiatus, he is back. There is interest in him, Haye remains a name in the sport and a draw. The problem is, we just don’t know what David Haye has come back. His one-sided, one-round mugging of poor Australian Mark De Mori gives little indication of how Haye will fare will the new beasts of the heavyweight division after such a long time out with a shoulder injury. Haye needs to find a contender or two to beat and so earn a crack at one of these three new champions.