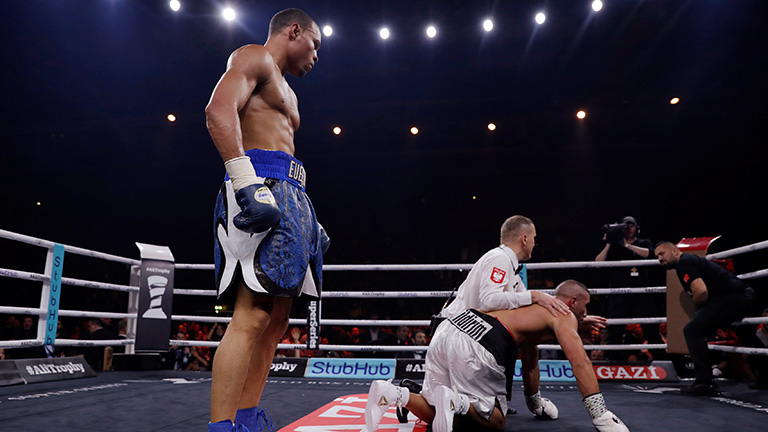 Sexton wins the vacant British title to foil the attempt by Cornish to become the first Scot to hold the British crown. Cornish made a confident start. He had huge physical advantages (6’7” 201cm vs. 6’2” 188cm) and he made good use of his jab and scored with a long right but a clash of heads opened a cut outside the Scots left eye. Sexton levelled things up in the second and then edged in front by taking the third just being quicker with his jab. Cornish was tying Sexton up whenever the Englishman got inside so the referee was having to work hard to break up clinches. Sexton also took the fourth scoring well with his jab. Cornish was on the front foot more in the fifth and wobbled Sexton badly with a right to take the round but he was also now injured under the left eye. The middle rounds were close but it was Sexton getting his punches off first and scoring with the cleaner punches as he built a lead and Cornish was bleeding from the nose and showing other signs of wear and tear. Both fighters tired and Sexton had a good ninth although he had abandoned the jab and was just swinging clubbing shots. With both fighters tired the tenth and eleventh feature more wrestling and clinching from both boxers and the referee stopped the action in the tenth to tell them to cut out the holding. Cornish tried hard over the last two rounds to turn the fight his way. He was fresher than the exhausted Sexton and made it close but just did not do enough to nick the verdict. Scores 116-113, 116-114 and 115-113 all for Sexton. The 33-year-old Sexton a former Commonwealth Champion and Prizefighter winner was having his third shot at the British title. The fight was to have been held five months ago but Sexton suffered a back injury which caused a postponement. As a result this was Sexton’s first fight for 15 months. The 30-year-old “Highlander “ Cornish, a former highland league footballer who had only nine amateur fights,  suffers his second loss having been stopped inside a round by Anthony Joshua for the Commonwealth and WBC International titles in 2015. He had scored three low level wins since then.

Simmons gets well earned victory over a disappointing Barclay. Simmons bossed the action from the start. He kept Barclay on the back foot with a stiff jab and scored well with straight rights. Barclay showed some nice moves and landed some good counters but was being outworked. Despite Barclay having slight edges in height and reach Simmons was easily winning the battle of the jabs. It was mainly a tactical battle with very little inside work and not much body punching. Although Barclay had his moments he just never really worked hard enough and Simmons pressed the fight in every round behind that strong jab. Barclay stole a round here and there when he brought his own jab to the fore but Simmons was the one throwing more and landing more and was a clear winner. Scores 119-109, 118-111 and 116-112 all for Simmons. The 33-year-old local fighter, a former Commonwealth bronze medallist, wins the vacant IBF East/West Europe title. In October he took world rated Noel Gevor to a split decision in  Germany at a time when the then unbeaten Gevor was rated No 1 by the WBO. Steelworker Barclay, 27, is a former double ABA champion. He was halted in two rounds by Matty Askin for the English title in March last year and does not seem be fulfilling the promise he showed as an amateur.

Philbin wins close quality fight against Pagan. Both fighters were quick and accurate with their work. Philbin scored with some stiff jabs staggering Pagan with one in the second and getting through with hard body punches. Pagan banged back with some quality work of his own but Philbin’s was forcing the fight and had a higher work rate. Pagan upped his pace from the fifth as they continued to trade punches in round after round setting a fast pace and providing plenty of entertainment. Philbin worked well with his jab in the sixth and ended the round with a furious attack. Pagan had a big seventh. He was landing heavy punches on a tiring Philbin and late in the round drove Philbin into the ropes with a cracking right and then unloaded on Philbin until the bell . Philbin recovered well in the eighth taking the old favourite left jab straight right approach but again had an uncomfortable spell as Pagan had him trapped on the ropes. Philbin had the better of a furious ninth but Pagan was stronger in the tenth rocking Philbin and the result was very much in the balance. Scores 96-95 twice and 98-93 all for Philbin who wins the vacant BBB of C Celtic title and remains unbeaten. The 27-year-old local fishmonger was a high level amateur and is now looking to move up to British title level after a few more fights. Fellow Scot Pagan had won 6 of his last 7 fights and came so close to a win here. His three losses have all been to unbeaten fighters.

Tiffney gets the win in another excellent contest. Tiffney forced this one from the start. The quick, slick and unorthodox James was comfortable on the back foot ducking, rocking and rolling out of the way of the Scots punches. Tiffney kept switching guards but also kept working hard for three minutes in every round and it was that tireless work rate that made the difference. He was able to trap Jones on the ropes cutting down the space for the slippery James but still found the Coventry fighter a difficult target. The Scot stepped up the pace over the second half of the fight and James also stood and traded more making it a good action fight but inevitably it was James who broke off the exchanges. Tiffney had James briefly in trouble in the seventh but it was strength, stamina and work rate rather than power that was Tiffney’s stock in trade in this one. James again looked briefly in trouble in the ninth but he boxed with skill and speed to take the last. Referee’s score 98-92 for Tiffney. The 28-year-old Scot was moving up to ten rounds for the first time and had never been past four rounds. He tired a bit in the last but was a convincing winner. James, 34, possesses some excellent skills. He was 10-2 in his last 12 fights with the losses being to high quality opposition in Terry Flanagan and Liam Walsh but was outworked here.

Gallagher stops Murray in the last round to retain the BBB of C Celtic title but the fight is overshadowed by injury to Murray. The Scot was given oxygen in the ring and rushed to hospital where he reportedly underwent an operation to treat a brain bleed. As I write he was reported to be in a stable condition. As for the fight Murray took the first with some good boxing but by the third the stronger Gallagher was getting the better of the exchanges. A right momentarily rocked Gallagher in the fifth but he was back in control in the sixth. The seventh looked even but then Gallagher took the eighth and almost halted a bruised and battered Murray in the ninth.  Gallagher landed heavy punches in the last with Murray battered and even turning away from the action before being put down. His head banged on the canvas and at first it looked as though the referee was ruling it a slip but then he started counting only to waive the count off. The 24-year-old Belfast fighter Gallagher , a Commonwealth Games gold medallist, was making the first defence of his Celtic title. Murray is in an even more important fight now and let’s hope it is one he wins and makes a full recovery.

Barnes gets easy win over inexperienced Spanish-based Peruvian Hinostroza. Barnes was able to slot punches through the porous guard of southpaw Hinostroza and land counters as Hinostroza lunged forward swiping wild punches. Hinostroza had only the most basic technique so it was no more than sparring and target practice for the talented Belfast “Leprechaun” He floored Hinostroza in the second and won every round but has sterner tests ahead. Referee’s score 60-53 for Barnes. The 30-year-old WBO European champion won two Olympic bronze medals, gold & silver at the European Championships, silver at EU championships and two golds at the Commonwealth. Down the line a fight with Chinese star Zou Shiming would be interesting as Zou beat Barnes in two Olympic quarter-finals and also beat him at 2007 World Championships. Hinostroza is 2-4-1 in his last 7 fights.