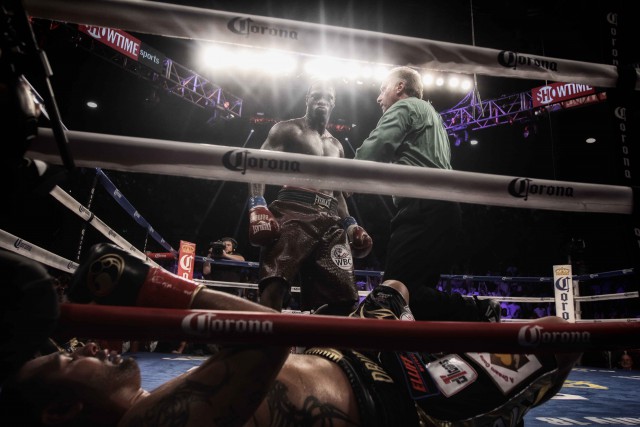 What to make of Wilder?

DEONTAY WILDER got there in the end. In Eric Molina he took on a humble opponent for his first defence of the WBC heavyweight title, a man who had been stopped in a round by Chris Arreola. It is good to see Wilder, who picked up a hand injury winning the belt against Bermane Stiverne, keeping so active. But the problem with taking a soft touch is Wilder needed to deal with him quickly, and impressively, just to meet expectations. Nine rounds was too long.

Wilder’s rise was built on a succession of hassle-free stoppage victories but his team insisted all the questions about him were answered in his world title winning performance. Then he did demonstrate he could box for 12 rounds, and didn’t necessarily have to knock everyone out. But questions return to haunt Wilder. He’s an exciting character, he now has a portion of the heavyweight crown but is he good enough to become American boxing’s next superstar?

His choice of opponent next will be telling. After a devastating first round knockout against quality Cuban Mike Perez, Russia’s Alexander Povetkin is Wilder’s mandatory. But will he take an easier option instead?

The wait for Walters-Lomachenko goes on

The featherweight division has lost an appealing potential unification fight. Nicholas Walters conceded his WBA title to the scales, unable to make the weight, though defended his unbeaten record vigorously enough as he outpointed Miguel Marriaga, even dropping him in the ninth round. Strong, big for the weight and technically sound, Walters versus Vasyl Lomachenko, the Ukrainian phenomenon, would have been an excellent match-up. But the Jamaican must surely move up a division now, while Lomachenko has made it clear he wants to hoover up the titles at featherweight before he moves on.

The next Puerto Rican star

After all the excitement around Miguel Cotto last week, a new Puerto Rican hero is on the rise. The buzz around Felix Verdejo continues to intensify. He met fellow unbeaten Ivan Najera on the Walters undercard at the Madison Square Garden Theater. He dominated over 10 rounds, putting the American down with his exciting offensive arsenal, it was remarkable that Najera managed to take him the distance.

Bristol’s Lee Haskins has laboured under the radar. His wins over future world champions Stuey Hall and Jamie McDonnell felt in the distant past. But he’s having a good year in 2015. After winning the European bantamweight title in February, he scored the biggest win of his career on Saturday, live on Channel 5, beating Ryosuke Iwasa and taking an interim title from the IBF. Whether this result puts him in with IBF full champion, Randy Caballero or another of the world titlists, Haskins deserves a big fight.