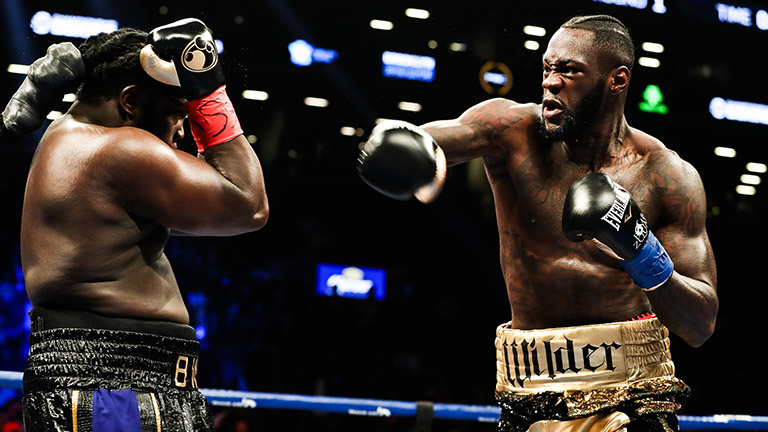 How bad was Bermane Stiverne against Deontay Wilder?

For a former heavyweight world champion, Bermane Stiverne was astonishingly poor. He came in too heavy and he could scarcely muster a punch in the fight itself. Who goes into a heavyweight world title fight and doesn’t throw a punch? It was a recipe for a disaster. Which duly came, in just under three minutes.

How powerful is Deontay Wilder?

The American hits very hard indeed. For the first knockdown, the right hand that blasted Stiverne off his feet was shockingly powerful. The finish though was not clean. As ever he went wild as he unleashed wide, clubbing shots. But even these were certainly heavy enough to put Stiverne down and out.

Is now the time to fight Anthony Joshua?

Wilder certainly did his part to drum up interest. He looked dangerous. His movement looked unconventional and awkward at times but Wilder still looks like a handful. And he said the right things afterwards, demanding an Anthony Joshua fight, even saying he would come to England for it. A heavyweight unification for the WBC, IBF and WBA world titles, that would be a big deal.

What next for Dereck Chisora?

The London heavyweight keeps managing to lose fights he needs to win. If Dereck Chisora had beaten Agit Kabayel and won the European title, that would have put him on course for another big fight. But he was outboxed and lost a decision. A rematch with Dillian Whyte now appears to be off the cards and it’s hard to see how Chisora could get himself in the mix for a world title fight. But Chisora reckons he has made many a comeback before and can do so again.

Is Scott Quigg back on the radar?

Despite his move to Los Angeles to train with Freddie Roach, it’s been a low key year for Scott Quigg. On the same bill as Dereck Chisora in Monaco, Quigg halted Oleg Yefimovych. This fight will position him though for some sort of world title shot next year.