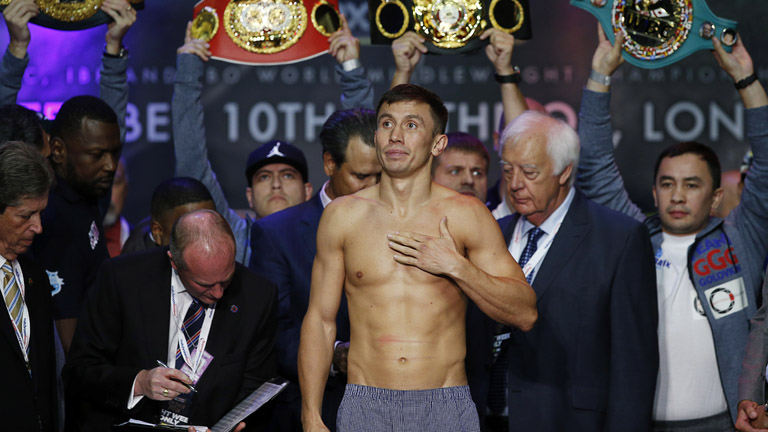 IS Gennady Golovkin disgruntled? After Kell Brook, who did look in ripped condition all the way up at middleweight, hopped off the scales, Golovkin strode through the crowded stage scratching his stomach, his face unsmiling.

The Kazakh champion, who puts his WBC and IBF middleweight titles on the line against Brook, weighed in at 158.9lbs, fractionally lighter than Brook actually who scaled 159.4lbs. Both made the weight of course. The fight is on.

The two went head to head for the final time before they enter the ring on Saturday. Golovkin’s chin jutted out as he gazed down at Brook. “GGG” looked unamused but it was impossible to tell whether he had been angered or if making weight this time had bothered him. In fact he could just have been displeased with getting caught up in London’s traffic on his way to this weigh-in at the O2.

“Aside from the traffic everything else is okay,” Tom Loeffler, Golovkin’s promoter, told Boxing News afterwards. “Gennady’s done this so many times, in the amateurs, professionals, he’s always very relaxed. When you’re as prepared as he is, he’s always very confident and Abel [Sanchez, his trainer] always has a good gameplan so everyone is just looking forward to tomorrow night.”

The WBA have not sanctioned this bout for their title, though Golovkin will retain it if he’s victorious. “One way you can take it as a compliment to Gennady because they’ve sanctioned a number of other fighters moving up two divisions who actually were successful moving up, like Adrien Broner moved up, he beat [Paulie] Malignaggi, Roy Jones moved up, he beat [John] Ruiz,” Tom said. “Kell Brook is in my opinion better than a guy like Broner, no disrespect to Broner but Kell Brook is clearly a world class fighter. He’s a world champion, undefeated, he’s never been knocked out before, he’s physically a big guy. He weighed in at all the weight checks we’ve done so far he’s always been consistently heavier than Gennady. Even on the scales today he was heavier than Gennady. I don’t really see a big physical disadvantage. [Golovkin] is a proud WBA champion, even though we don’t agree with the decision we have to abide by the rules. The WBC, the IBF, the IBO and the British Boxing Board of Control had no issues with the fight and they’re probably the most conservative organisation around.”

He views this fight in London as the next step forward for Golovkin’s career. “It’s always been our plan to make him an international brand and to continue to grow his brand. He’s fought in numerous places, he’s fought in Panama, he’s fought in Ukraine, he’s fought in Kazakhstan, he’s fought three times in Monaco, he started his career in Germany,” Loeffler said. “Even though he had the unification fight against David Lemieux in Madison Square Garden, which he sold out, or the last fight at the Forum, which he sold out, this just has a completely different feel than any of his previous fights in terms of the fan reaction, in terms of the media reaction. It seems like this is the fight that everybody’s talked about.

“Eddie [Hearn] couldn’t get the big fight for Kell, we had a very difficult time getting a big name to actually get in the ring with Gennady and it really solved the problem for both fighters.

“Having two undefeated champions fighting against each other, arguably the best in their respective divisions, that’s what the fans react to.”