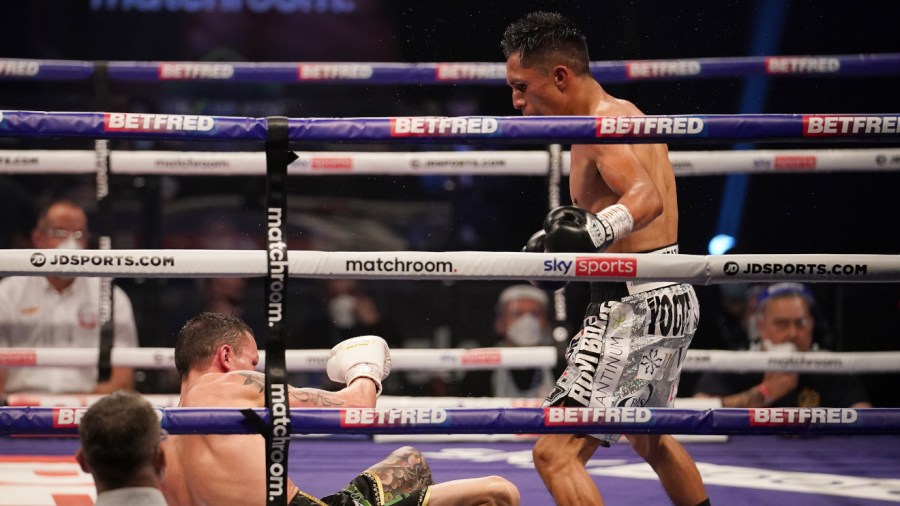 In pursuing immediate Lara rematch, Josh Warrington has shown exactly what kind of man and fighter he is, writes Matt Christie

JOSH WARRINGTON was waiting so patiently for the biggest fight of his life he didn’t see it coming. It arrived unexpectedly, quietly at first, inside an empty Wembley Arena seven months ago, in the shape of unknown Mexican Mauricio Lara. By the time Warrington realised he was in the midst of it, probably at the point he was crawling off the canvas in round four, he could do nothing about it. The pair rematch at the weekend in one of the most intriguing bouts of the year, and this time, Warrington is acutely aware of it. But the question remains: Even when bracing for it, even when better prepared for it, even with his vociferous fans in attendance watching it, will the outcome be any different?

Rematches of this nature are notoriously difficult to predict. Favourite beaten by underdog leads to several different outcomes in immediate returns.

Firstly, you have the obvious outcome or, more accurately, the obvious outcome if only the first fight is used as evidence: The winner of fight one repeats their supremacy in fight two. Some high-profile examples of this include: Junior Jones-Marco Antonio Barrera; Davey Moore-Hogan “Kid” Bassey and Ivan Robinson-Arturo Gatti.

Secondly, you have the result that tends to be the ‘sensible’ pick: That the loser, caught out by complacency first time around, was always the better fighter and will make the necessary adjustments, take fewer risks due to an enhanced understanding of the danger they face and win the sequel, albeit undramatically. Such a conclusion was exhibited recently when Anthony Joshua dominated Andy Ruiz Jnr over 12 rounds and back in the 90s when Terry Norris did the same to Simon Brown (though both Norris and Brown had a fight each in the interim).

Thirdly is perhaps the least obvious and hardest to call. This scenario is the dream scenario for the loser of the first chapter: A thorough thrashing of the fighter who dared to turn their life upside down. See, Lennox Lewis-Hasim Rahman, Floyd Patterson-Ingemar Johansson, Dillian Whyte-Alexander Povetkin and, though the loser of fight one wasn’t exactly beaten up, Roy Jones Jnr squashing Montell Griffin. Revenge served at its coldest.

Warrington again taking on Lara, particularly so soon after their opener, is gutsy in the extreme. None of the rematch winners listed above, perhaps with the exception of Patterson, were beaten in such a psychologically harrowing and physically insurmountable manner as Warrington.

By chasing this rematch with all his might, Warrington has already exhibited exactly what kind of man and fighter he is. We can and should admire boxers who accept challenges in which victory appears a mountainous task. Think Rocky Fielding taking on Canelo Alvarez. But Warrington, though the bookies favourite, is undertaking a different challenge entirely. This is an opportunity he could afford to turn down. Lara was and remains largely unknown to the wider public yet he has haunted Warrington for months. There is no belt or championship at stake. There are opponents out there who would bring greater reward with significantly less risk. He doesn’t have nothing to lose, he has everything to lose; Warrington is placing all his chips on the table and gambling only on himself.

Should he achieve victory, it will not only be Josh resetting and getting back to where he was, it will be a personal triumph of the highest order. Regardless of Lara’s standing or fame, if Warrington can overcome the physical and psychological obstacles his opponent brings, it will also be one of the most impressive turnarounds in recent memory.

JAKE PAUL continues to hog the limelight. The boxing hardcore can scoff and turn their noses up but there are lessons to be learned. The dawn of a new era might already be upon us. In the absence of a structure that is easy to follow – one that youngsters can take to their hearts and embrace – new fans will instead be drawn into the simple worlds of Jake Paul and the equivalent. This is boxing for the next generation. And if the sport isn’t careful, this new form of boxing – the business of one-off and lucrative pantomimes with a beginning, middle and end – could soon be the new norm.