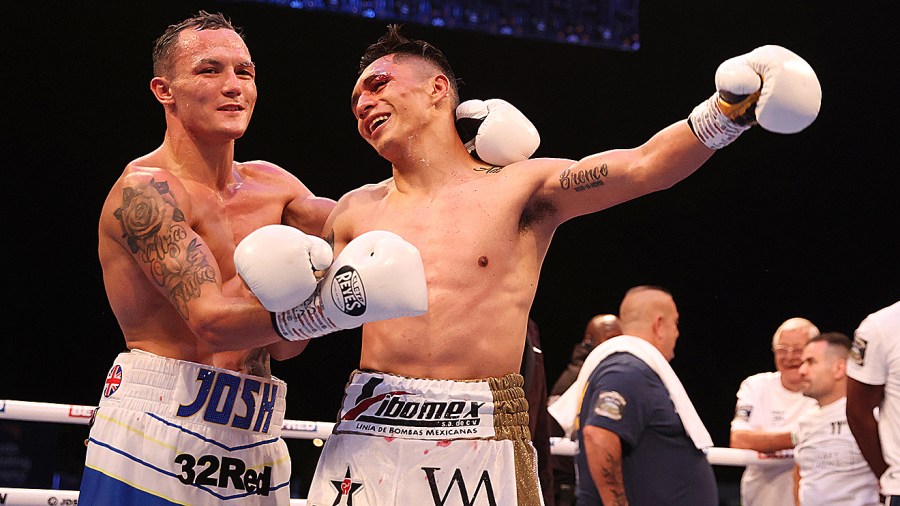 IT was supposed to be the night Josh Warrington either slayed his demons or begrudgingly accepted once and for all that Mexican Mauricio Lara had his number. Whichever way it went, in taking the immediate rematch, he wanted to find out.

It was also supposed to be the night Mauricio Lara discovered the difference between fighting Josh Warrington inside an empty venue, as he did when beating him back in February, and fighting Josh Warrington inside a packed-out Headingley Stadium. In going from one to the other, we, the audience, would find out whether Lara was able to rise to the occasion, thus announcing his arrival as a new boxing star, or would simply depart Leeds not just with his tail between his legs but with an altogether different view of what it is like to fight in England than the one he formed earlier this year.

Sadly, though, despite the promise of questions being answered and truths being revealed, both Warrington and Lara, as well as the watching crowd, were left as uncertain at the end of their featherweight rematch as they were at the start of it. They were left uncertain due to a cut to the left eye of Lara (caused by an accidental Warrington headbutt in the second round) bringing a premature end to Saturday’s (September 4) rematch between rounds two and three and ensuring the fight was declared a technical draw.

It was an unsatisfactory ending to what, on paper, appeared a compelling rematch and what, in reality, was again building into something quite spectacular. It was indeed this, the tease of something special, which perhaps made the premature stoppage so hard to stomach when it arrived.

By that stage in the fight, Warrington, operating behind a high-held guard with the horrors of the first loss in his eyes, was thinking his way through proceedings, circumspectly, yet appeared more than happy to engage whenever Lara, as confrontational as any featherweight out there, looked to engage. It was clear, in fact, that Warrington, 30-1-1 (7), wanted to both feel his way into the fight – that is, not be as gung-ho as he was first time around – but also not allow Lara to gain too much momentum or at any point think he was running scared.

This approach made for an explosive couple of rounds, with both men having success, and Warrington didn’t have to wait long for his. He got off with a solid right hand with only a minute gone in the opening round and the legs of Lara buckled momentarily. Shocked by that, Lara was then later nailed by Warrington against the ropes, which brought the Leeds crowd to their feet and increased the volume inside the stadium.

But not so fast. In the second round, it was suddenly Lara’s turn to find a home for his own right hand, which he did early to leave Warrington with that same haunted, wide-eyed looked from fight number one; an expression indicative of past traumas. It was shortly after that, however, that Lara found himself cracked by a headbutt from Warrington and had to turn away from the action, forcing referee Steve Gray to intervene, call a time out, and rule it accidental.

Seemingly undeterred, but certainly given greater impetus to attack, Lara set about Warrington again at the restart, firing with various looping uppercuts to the body. After that, he landed a right hand-left hook combination as he roamed forward, followed by more wide and hard-to-read uppercuts, some of which penetrated Warrington’s otherwise tight guard and, due to their trajectory, took the Leeds hero by surprise.

Now, much like before, Lara, 23-2-1 (16), cut an intimidating, merciless presence. He dug in right and left hooks to Warrington’s body and appeared never more excited or energised than when Warrington, almost forced into it, agreed to trade back with him. Whenever this happened, it was often Lara who seemed to possess the more damaging artillery, with his threat level, despite the added presence of a pro-Warrington crowd, just the same as it was in February. His punches were those of the chopping variety – heavy, hurtful, and long-lasting in terms of their impact – and Warrington, having already sampled enough of them, was soon on the move, both legs and mind travelling backwards.

Alas, irrespective of the bout’s encouraging start, these two featherweights were apparently destined to walk away from it unsatisfied. The Lara cut was a sign and the blood later flowing from the cut in the second round had Lara all of a sudden frantic – more so than usual – and most ringside observers thinking the worst. It was then between rounds two and three that the call was made for Lara to be withdrawn from the contest and for the contest to be declared a technical draw, a disappointment to everybody, not least of all the fans.

For while it is of course hard to say with any certainty, there was a sense, based on the six minutes of action completed, that Lara vs. Warrington II was building into a potential classic. Better than that, there was an even greater sense that the ending was going to be something both brutal and conclusive.

As is almost customary on these big Matchroom shows, Ireland’s undisputed female lightweight champion Katie Taylor, 19-0 (6), once again highlighted the gulf in class between her and her opponents by dishing out a dominant beating of American Jennifer Han, 18-4-1 (1), over 10 rounds.

Too quick, too technically proficient, and too intelligent, Taylor outboxed Han for each of the rounds they shared and even managed to drop Han in the eighth round. This dominance led to more of an exhibition feel to the fight, rather than a competitive one, and guaranteed Taylor received scorecards of 100-89 from all three ringside judges after the final bell.

Also on the Headingley undercard was a terrific learning fight for Conor Benn, albeit perhaps not the most entertaining one for those who watched Benn struggle to pin down Adrian Granados for 10 rounds.

Benn prevailed on the cards in the end, winning by scores of 100-90, 99-91, 97-93, but had to work hard for the win and would have no doubt picked up plenty from sharing the ring with a wily campaigner like Granados.

Unwilling to engage, Benn found in Granados someone who would for the majority of the fight, especially early, before eventually deciding to come on strong – relatively speaking – in rounds eight, nine, and 10. It was, of course, by then a case of too little too late for the visitor, with Benn already well ahead in the fight and dictating much of it through his natural aggression, his reliable jab to the body, and a spiteful right hand upstairs.

This aggression had forced Granados into a shell from the outset, noticeably following a good end to the third round for Benn, and it was a shell from which he never really tried to escape. There were pretty defensive moves and impressive spells of lateral movement exhibited by Granados but not once did he ever try to grab a foothold in the fight or threaten to become anything more than a glorified sparring partner for Benn.

Finally, a note on Yorkshireman Maxi Hughes, who has had his ups and downs but came of age when it mattered most against the favoured Jovanni Straffon in a lightweight 12-rounder. Hughes, 24-5-2 (5) and never a puncher, impressively used his underrated skills to teach his Mexican opponent (now 24-4-1, with 17 wins by stoppage) a lesson for every single one of the 12 rounds they shared, taking a unanimous decision at the bout’s conclusion (120-107, 120-107, and 119-109).