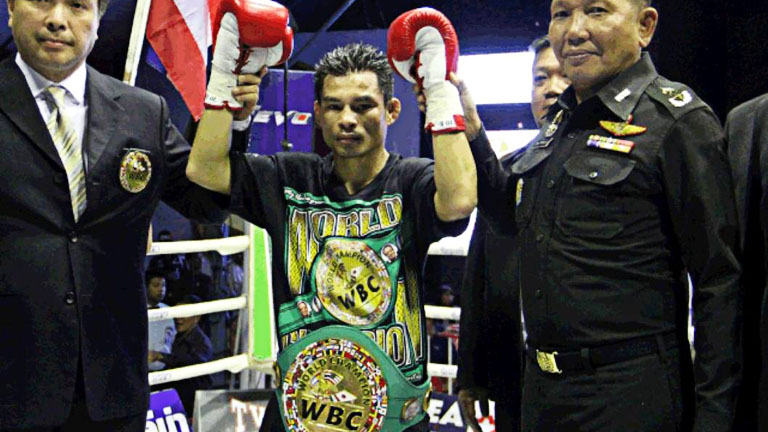 Eric Armit on the Wanheng-Mayweather debate, the return of Jorge Barrios and the 'disappointing' return of cruiserweights to the WBSS

THIS has been a memorable week for boxing in Thailand as Wanheng Meenayothin (Chayaphon Moonsri) won his 51st fight. It has been reported he’s now surpassed Floyd Mayweather’s unbeaten record but for that to truly happen,  Wanheng has either to retire now with 51 wins or not lose in the future.

The other milestone for a Thai fighter has also been achieved today (September 1). The 41-year-old former WBC bantam and super-featherweight champion Sirimongkol Singwancha (Sirimongkhon Iamthuam ) now has a 96-4 record, reaching 100 fights with victory over  Muhammad Nsubuga (0-7!) after a 24-year career.

I am not sure if any other Thai fighter has reached that total. He started out as a super-flyweight and in fight 100 he claimed the Thai light-heavyweight title which is curious considering Nsubuga is Ugandan. Between losing his WBC super-feather title to Jesus Chavez in 2003 and losing a fight to Uzbek Azizbek Abdugofurov for the WBC Asian Boxing Council middleweight title in February, he won 51 fights in a row.

That Sirimongkol vs. Nsubuga contest was typical of many abysmal matches in Thailand. Last weekend Tajik boxer Abdul Buranov lost to WBC No 3 flyweight Noknoi. Their respective records before the fight were Noknoi 66-5 and Buranov 0-3. In his four fights Buranov’s opponents records have been 64-5 (Noknoi), 21-1, 15-2 and Noknoi again with 66-5.

I can’t help but be disappointed that the WBSS are going to do another cruiserweight series. Let’s face it this is a competition for the also-ran or never ran. Mairis Breidis, Yunier Dorticos, Krzys Glowacki, Marius Masternak, Maksim Vlasov, Andrew Tabiti and Noel Gevor are all good fighters and Russian Ruslan Fayfer in unbeaten but it was the knowledge that it could end up with Oleksandr Usyk fighting Murat Gassiev that made the original so interesting and this tournament has no such star attraction.

It always seemed likely that the WBA would have to stand by the results of the purse bids-or should I say bid as there was only one-for the Ryota Murata vs. Rob Brant fight for their secondary middleweight title. If they had not done so but instead allowed Murata to fight Jason Quigley then the lawyers would have had a field day. Murata fights Brant in Las Vegas on 20 October and you can be sure that Bob Arum will be looking to get Quigley a fight with the winner or look for some other way to get the unbeaten Irishman a title shot.

African news has Joseph Agbeko returning to action on 8 September in Ho in the Volta Region of Ghana. He will fight fellow Ghanaian Ekow Wilson in defence of his WBO African title.

A couple of heavyweights will be in action on 8 September in Germany as Alex Dimitrenko makes a quick return after his loss to Bryant Jennings but no opponent named. In fact the New Jersey Commission gave Dimitrenko a suspension after the loss to Jennings which does not expire until 17 October!

The other bout features Croatian hope Filip Hrgovic against veteran Amir Mansour. Big test for Hrgovic even though Mansour is 46. This fight is for the vacant WBC International title. In Mansour’s last fight in November, a technical draw against Sergey Kuzmin, the result was changed to No Decision as Mansour tested positive for a banned substance.

Japan has only one fighter in the world ratings and that is Kyotaro Fujimoto. The WBO have him at No 7 on the basis of his winning their Asia Pacific title. His opposition has been very modest at best, certainly not enough to be rated above Bryant Jennings or Dereck Chisora, but he is. They are not taking any chances with him. He is due to fight on September 25 with the name being bandied about of Thai Suthat Kalakek a former OPBF super middleweight title challenger who lost his last fight to a 6-0 novice. Hope they come up with something better than this for a world rated fighter.

Former WBO super featherweight champion Jorge Barrios has applied to the Argentinian Boxing Federation for a licence to fight again. Now 42 Barrios was recently released from prison after serving three years and seven months for homicide and culpable injuries. When driving his car he ran down and killed a 20-year-old pregnant woman and left the scene of the accident. He has served the sentence that they gave him but four years for what he did seems wholly inadequate.