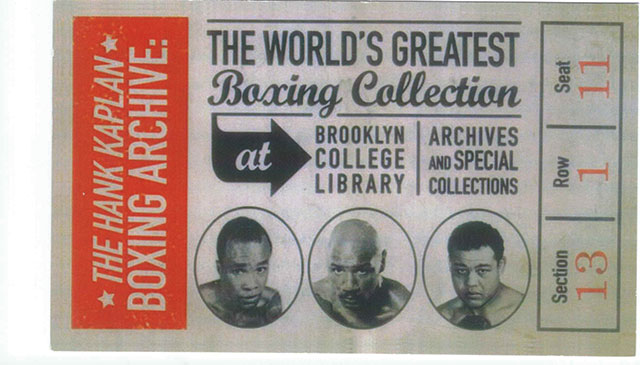 ONE of my favourite places over the last two years looks like an ordinary room in New York. It’s tucked away down a corridor at the Brooklyn College Library but, as soon as you hit the buzzer, the doors swing open and you walk into the world’s most amazing boxing archive. You sign in and then, with a deep breath, step back into ring history and decide where you’d like to be for the day, in what year and with which fighters, among a collection of 500,000 photographs, 2,600 books, 300 audio and videotapes, 1,200 posters, hundreds of scrapbooks and, best of all, 790 boxes of newspaper clippings about boxing from 1890 to 2007.

Each morning, on my way to the Hank Kaplan Boxing Archive, I walk past the Avenue H subway, where the Q train runs, and slip inside a downbeat Brooklyn diner. While waiting for my ritual bagel and coffee I scan the newsstand crammed with cheap gossip magazines. The New York Times, the Daily News and the New York Post are kept in small piles on the bottom shelf. I always think of Hank Kaplan, the greatest boxing historian, and remember how different life had been for him and the fight-game.

A research assistant at the archive once told me how Kaplan had set about building his incredible archive in the early 1960s. He began every day in Miami in the same way. Kaplan sauntered down to the news kiosk on his street corner and bought three copies of every newspaper. All the leading US publications – the New York Times, the Washington Post, the Los Angeles Times and the New York Herald Tribune – were available at his local newsstand.

Kaplan did not check whether the papers contained boxing features, reports and news stories. It was a given that, every day, boxing was covered heavily in the major American newspapers. If Emile Griffith was defending his world welterweight title against Luis Rodriguez then Kaplan would cut out every article about the fight in all the papers. He did this three times with each piece.

One copy would be stored in his Griffith file, another in the Rodriguez folder and the third would be reserved for whoever else featured prominently – whether it was Gil Clancy in Griffith’s corner or Angelo Dundee as Rodriguez’s trainer. MCaaybe the third would be tucked away in the Cassius Clay file because the young American loved training alongside Rodriguez at the Fifth Street gym in Miami and he also admired Griffith. Clay would talk about both men and that historical nugget would be placed in a bulging folder devoted to him before he became Muhammad Ali.