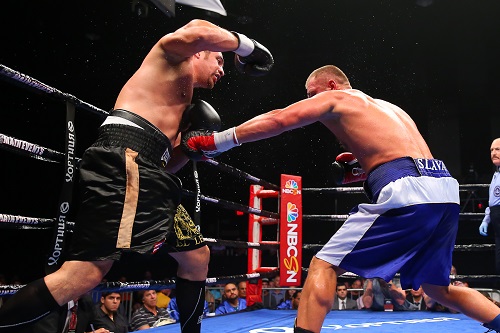 Vyacheslav “Czar” Glazkov, 18-0-1, 11, from Lugansk, Ukraine won a brutal 10-rounder against Derric “El León” Rossy, 29-9, 14, of Medford, New York. The first round started slow with both fighters trying to feel each other out. They ended the second trading good shots, keeping the fight close. Rossy took the third round with ease. The next four rounds were close, with both fighters trading big shots. Rossy looked tired at the start of the eighth but continued to hang in there with Glazkov.

Czar suffered a cut below his left eye at the end of the eighth. Glazkov dominated Rossy in the ninth, but Rossy managed to stay on his feet until the final bell. Glazkov managed to pull out a majority decision victory with one judge scoring the bout 95-95, and the other two scoring the bout 96-94 and 98-92 in favor of Glazkov. After the fight, Czar said, “My hand was bothering me. It wasn’t broken, but it did not recover as well as I had hoped. It is not an excuse but it was still bothering me from my fight with Adamek.”

Rossy said, “I am disappointed. It is hard to get the words together. I am trying to find out what they were looking at. There is no accountability. You are messing with peoples’ lives. I take my hat off to Glazkov. I know I won that fight. When it is very askew you have to wonder, where is the accountability?”