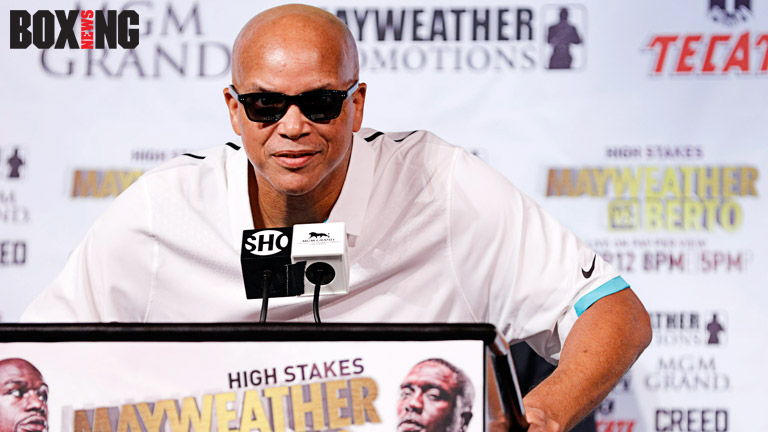 AMIR KHAN must dictate the distance and range against Saul ‘Canelo’ Alvarez in order to win the fight, according to his trainer Virgil Hunter.

The pair will meet at a catchweight of 155lbs when they fight on May 7, though Khan will be giving away a lot in terms of size given that Canelo is naturally the bigger man.

Hunter, who was in the corner for Alfredo Angulo when Canelo stopped in 2014, remains unconvinced that the Mexican is as dangerous as he is made out to be.

“Canelo doesn’t punch as hard as people might think he does. He hit Angulo with everything in the book and not one time did he wobble, go down, or stop coming forward,” he told Boxing News.

“He hit him with everything and Angulo kept marching forward – he actually won the seventh and eighth rounds on all the judges’ scorecards.

“Particularly, Canelo was tiring and that was the plan I wanted to implement, if you can force him to work and be defensive and catch him when he’s fatigued. I said to Angulo, ‘if you can put on the same pressure that you put on [Erislandy] Lara, you can beat him.’ Lo and behold we got him down to one punch at a time, but Angulo couldn’t capitalise on that.

“He [Canelo] touches off the target, he hits well to the body. But basically, to the head, he only touches. The only real 154lb fighter he ever stopped was [James] Kirkland and he hadn’t fought in a year and half and he’s very shaky in the first two rounds of a fight until he warms up. They hyped it up like it was a dangerous fight, but it wasn’t.”

With 32 stoppages from 46 wins, Alvarez is considered a dangerous puncher however is by no means a constant aggressor.

His sole loss came at the hands of Floyd Mayweather, who outclassed him over 12, and Erislandy Lara and Austin Trout both pushed the 25-year-old to the wire with their movement and speed.

“One thing that’s interesting is that Canelo isn’t a pressure fighter, he’s not a Roberto Duran or [Antonio] Margarito who puts constant pressure on you, he’s more of a counter puncher,” Hunter mused.

“He’ll bring his presence but he doesn’t like to go and get you, he has a lot of difficulty doing it and it takes a lot out of him. That’s why Floyd was able to do what he did and that’s why Lara wasn’t in any danger.”

Khan joined forces with Hunter – who also trains Andre Ward – at the end of 2012 and the wise American has guided Amir from super-lightweight into the welterweight division, meaning his fight with Canelo will be unknown territory.

Khan has not fought since last May when he outpointed Chris Algieri in a fairly unconvincing performance – which Hunter puts down to a lack of motivation and the fact Khan entered the fight with a head cold.

However he has been ticking over alongside his commendable charity work. Hunter was first told about the Canelo fight a few weeks ago and admitted he got on board once he sat down with his charge, who mapped out how he thinks Alvarez can be beaten.

“We’ll take into consideration where the likes of Floyd, Lara and Trout were successful. But what works for one guy may not work for another.

“Amir has quick feet but they’re not as educated as Floyd’s, knowing when to move and when not to. But I think Amir can have the same success as long as he establishes his distance and range. I think that’ll be the most important thing in camp and in the fight. Where he needs to be to get off certain punches and where he doesn’t need to be.

“In fact, we’ve already started drilling that and I’m very happy with what I’ve seen. Also, he came to me in good shape. He’s been doing some conditioning work for a few months so he came in at about 70%.”