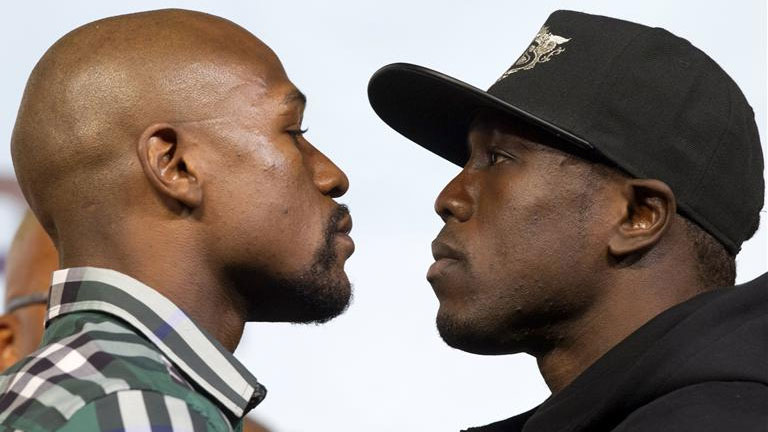 The rivalry between Mayweather and Berto is personal, Hunter insists

VIRGIL HUNTER threatened to steal the show in Las Vegas when he said that Saturday’s showdown between Andre Berto and Floyd Mayweather was “personal”. Berto’s trainer even went as far as comparing the contest – which has been panned by critics as a mismatch – to the legendary rivalry between Muhammad Ali and Joe Frazier.

“I’m just going to say it, we got two brothers here,” said Hunter while pointing to the black fighters. “I think about Joe Frazier in the ‘Thrilla in Manila, when people thought he was done, but he fought over his head. Does Andre Berto have that capability? Yes, of course he does. We see it all the time in sports. There are nights when it just happens. Andre Berto is going to take it over his head and that’s what he intends to do and what he has to do.”

Berto later spoke out about the criticism he has been subjected to by the media while Hunter explained his frustration that writers giving his fighter no chance have not even watched him train.

“I got this feeling that the writers who put this fight down, who don’t even come to the gym and look at the fighters, are in for a big surprise,” he said.

“There is something brewing in the air. There is personal stuff here. I been in boxing a long time. This is personal. I don’t know what it is. But I can take a wild guess. This is gonna be a rumble.

“This fight gonna be way deep down, and that’s where a lot of people are afraid to go, and that’s the hoods of the United States. Watch what I say.”

Mayweather, though, was not amused by Hunter’s claims. Nor was he pleased with his own trainer and father, Floyd Mayweather Snr, who spent his time on stage nudging Berto’s arm and hurling insulting rhymes in his ear.

“I want to apologise for both trainers for coming up here and talking about things that are not important,” Mayweather said after the press conference. “The trainers don’t have to fight. It comes down to the two fighters.”