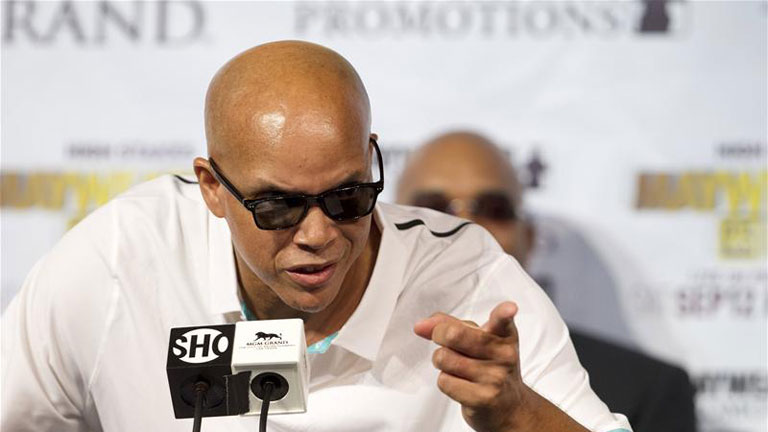 Virgil Hunter speaks ahead of Sergey Kovalev vs Andre Ward

VIRGIL HUNTER, esteemed trainer of pound for pound stalwart Andre Ward, believes that unified light-heavyweight champion Sergey Kovalev’s camp is in ‘disarray’ ahead of the Russian’s mouth-watering clash with Ward this weekend.

Kovalev will defend his IBF, WBA and WBO world titles against Ward at the T-Mobile Arena in Las Vegas in the most anticipated fight of 2016.

With just day to go before the fight, Hunter claims Kovalev’s trainer – John David Jackson – is being undermined and that Kovalev’s preparation has suffered for it.

“What I mean by that is I don’t even know if Coach Jackson is getting the respect he is due in that camp but time will tell. For instance, why do we have to make an excuse for Kovalev in Russia for selling tickets and things. Don’t you have a team who could have taken care of that? You’re supposed to have a team to take care of that to take the pressure off the fighter.

“I believe somebody probably told Kovalev to say that Ward is a dirty fighter because you go eight, nine weeks and all of a sudden he is a dirty fighter? Kovalev will learn, one day, to not be everyone’s robot and do what they tell and ask him to do. He does it because he’s loyal. It doesn’t even sound like him. That’s not him saying that. That’s not in his character. That is his promoter saying that. It’s nothing, but if he kicks Ward, he’ll get kicked back. Simple as that.”

For the most part, the promotion has been one full of mutual respect – understandable, given that the fight sells itself – but as the clock counts down to fight night, tensions have arisen.

Hunter – widely regarded as one of the finest trainers in the world, and who has moulded Ward from his youth – understands the pressures that come with a fight of this magnitude.

The victor will have a strong claim to being, pound for pound, the best fighter on the planet and although Hunter does not pay heed to such considerations, he expects the importance of the fight to bring out the best in each boxer.

“We know Kovalev is a dangerous fighter, we give him all he’s due. I give Coach Jackson all he’s due,” he continued.

“The coaching fraternity is a very tough fraternity. We are the first ones to get the blame. The fighter never takes full responsibility for his shortcomings. The fighter always has other people in his ear, telling him there is a better way, so I understand what he goes through as a coach.