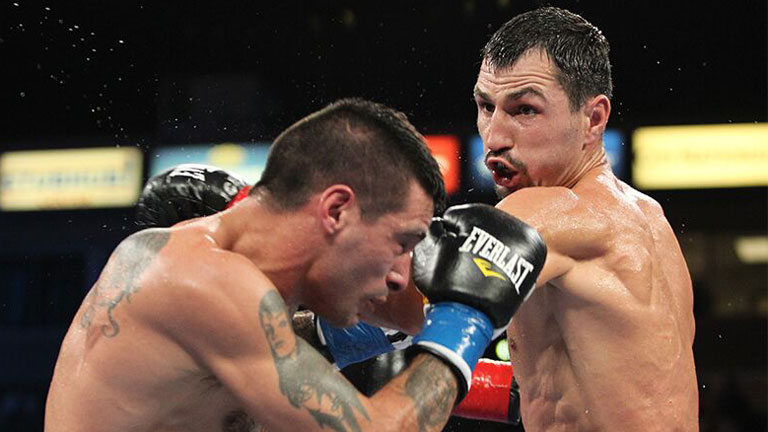 VIKTOR POSTOL has vowed to ‘destroy’ Terence Crawford in their super-lightweight unification fight at the MGM Grand in Las Vegas on July 23.

Postol won the WBC title in his last outing, an emphatic upset stoppage of former division leader Lucas Matthysse, and intends to produced a similar performance against favourite Crawford.

“What differentiates Crawford from many other fighters are his skills and technical attributes.  From a mental aspect he is a very clever boxer, always using his mind in the ring, changing stances, all the time adapting to different types of opponents,” he said.

“He has shown this in his previous fights.  But that does not mean he is the best I have fought.  I think Lucas Matthysse is a higher-level fighter than Crawford and everyone knows how my fight with Matthysse ended, with him knocked out and the WBC belt around my waist.  And that is exactly where the WBC belt will remain after my fight with Crawford on July 23.  Just above the WBO belt.  I am looking forward to destroying Crawford, destroying his perfect record and destroying his reign as world champion.”

Crawford, a two-weight world champion, having also held the WBO lightweight title, is already rated as one of the best fighters in the world.

Postol’s trainer, Freddie Roach, is well aware of Crawford’s talent but remains convinced his man has the tools to win.

“Crawford can box and move and is a very good fighter.  I think both fighters are very complete boxers and both have good amateur backgrounds and great pro backgrounds,” he said.

“They have one common opponent — Hank Lundy.   Crawford knocked him out but when we fought him four years ago and won a decision, Lundy was in his prime.  And just because I am impressed by Crawford doesn’t mean I am intimidated by him.  Viktor will break him down just as he did with Matthysse.  He has a lot of patience which comes from experience.  He’s going to break Crawford down brick by brick, with his jabs and his body shots.

“Viktor leaves nothing to chance.  No one works harder in the gym than Viktor.  I give Crawford a lot of credit for taking this fight.  But bravery will only take you so far in this game and in this fight it won’t be taking Crawford into the winner’s circle.”