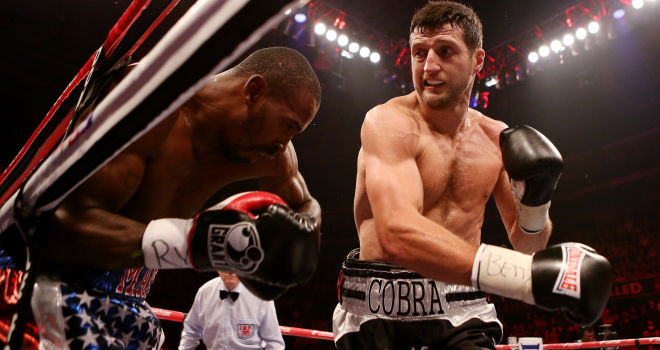 CARL FROCH is 37 and has had a borderline Hall of Fame career to date.

At this stage there is no such thing as being greedy and feeling a sense of entitlement because the reality is that “The Cobra” has earned it.

How much longer Froch continues to box is speculative, but at this point it appears as if he is ready to cash out. Froch has strongly suggested that either he gets a fight in Las Vegas next or he will call it a day. Froch has never experienced the thrill of seeing his name up on the billboard of the bright lights of sin city. It is an experience he craves, one that can still motivate him to train hard and perform at optimum level.

Froch only boxed once in 2014, a telltale sign that perhaps the desire is starting to wane. Although there is no physical evidence that Froch has started to decline he clearly does not seem to have the same lust for fighting that he once did. A massive fight in Las Vegas would change that.

Froch has no shortage of opponents who he can box at home and at various venues around the world, but his options are extremely limited for Las Vegas. Nevertheless they are there, but the Nottingham man must be the hunter, not wait to be hunted.

The most obvious fight for Froch would be a domestic clash against James DeGale. A couple of years ago Froch would have been a prohibitive favorite, but his vulnerability in the George Groves fights coupled with DeGale’s improvement has now made the proposed contest a toss-up. It would be a massive fight if they met in England, but Froch understandably does not want it. Nor should he be pressured to take it. Froch has accomplished so much more than DeGale that he has earned the right to ignore him for the time being. And by relinquishing his IBF super middleweight title rather than face DeGale, that is exactly what Froch is doing.

Mikkel Kessler has made some noise about having a rubber match with Froch, but what has the man from Denmark done lately to perk anyone’s interest? Recent reports have Kessler contemplating retirement.

A unification fight with WBC super-middleweight holder Anthony Dirrell would be competitive, but it has a stale feel to it. People would think of it as a rematch, not realising that Froch has already beaten brother Andre, not Anthony, so obscure is the current champion.

If Froch were to move up to light-heavyweight he probably could land a match against either Adonis Stevenson or Sergey Kovalev, but it would come at the expense of being on the B side of the promotion. Froch would be viewed as a bit of a party crasher as everyone would rather see these two unify against the other than face him.

There is talk of Froch boxing Bernard Hopkins. If the ageless warrior billed it as his farewell fight at age 50, then perhaps the match could garner some interest in Las Vegas, but could anyone take Hopkins at his word? If he were to defeat Froch, chances are that Hopkins would explore other opportunities. If the latest rumors are true, Hopkins and Froch might be a duo in Nottingham this summer. While such a matchup would make sense for Froch from a business viewpoint it does cast doubt over his resolve of how important a Las Vegas fight is.

Although Froch has made his intentions of boxing in Las Vegas clear, what he has failed to do was state how big a fight it would have to be. When DeGale called him out, Froch was politely dismissive of the challenge, but said that he would consider the option if the match were made for Las Vegas. Realistically that made no sense, but it does reveal that everything is on the table if the circumstances fit Froch right. However, there are only three opponents out there who might be ready and willing to meet Froch in Las Vegas, that would create a huge buzz with the American audience. They are Julio Cesar Chavez Jnr, Gennady Golovkin, and Andre Ward. Forget everyone else. It is these three and only these three that can realistically fulfill Froch’s Las Vegas dream. Let’s explore each individually:

Julio Cesar Chavez Jnr – This would be the only one of the three where Froch might not be considered a huge underdog. That in itself makes the match appealing. Chavez’s defense is leaky, and anyone that Froch can continuously hit he can dispose of.  It would be a very fan friendly fight where win or lose, Froch would acquit himself well.

Chavez Jnr has essentially lived off of his father’s name for his entire career. True he nearly stopped Sergio Martinez and halted Andy Lee, but still needs that one big victory that can rocket him on the way to stardom. Froch could be that opponent. For Froch it would be a dream fight that would be met with much anticipation considering the Mexican boxer’s charisma. It looked like it was going to happen for sure this spring, but then Froch got injured and Chavez lost interest in rescheduling the fight. It could still resurface as a major attraction this summer.

Gennady Golovkin – Triple G has been called the most feared man in boxing. That alone should make securing a match against him no problem for Froch. Although Golovkin is only a middleweight, his advisor Tom Loeffler has said his man would box at super-middleweight if it were the right fight for him. And Froch would be the perfect opponent, one with big time name recognition that would elevate Golovkin much closer to mega star status if he should win in overwhelming fashion.

Reportedly Froch once said that he wanted no part of Golovkin, words he later said were taken out of context. Whatever his intent was, Froch understands that Golovkin is a handful. It is hard to believe that Carl would be anxious to get in the ring with him, but if that were the big Las Vegas fight he were offered there is little doubt he would accept if the financial terms were fair. Golovkin would doubtless want the fight to be held in Madison Square Garden where a big Russian contingent would support him, but he needs a big fight in Las Vegas as much as Froch does, perhaps more so for the exposure it would bring.

Andre Ward – Because Ward has already outpointed Froch you would think that a rematch would not have much interest. Think again. Froch has won five straight since he was outpointed by Ward in the finals of the super six tournament. Ward clearly won, but two of the scores were close (115-113). And by the end of the fight Froch was the stronger man. Ward has been relatively inactive since then while Froch has had a resurgence in winning the Kessler rematch and looking brilliant in destroying Lucien Bute.

The bottom line is this: Andre Ward needs to get back into action against a high profile opponent, but because of his inactivity he has to alter the risk slightly. Froch would serve that purpose. Ward knows he can beat Froch and will use the rematch as a barometer to see how close he is to his previous form. Ward is also Roc Nations first major signing. They certainly would want to match Ward with an opponent of substance such as Froch.