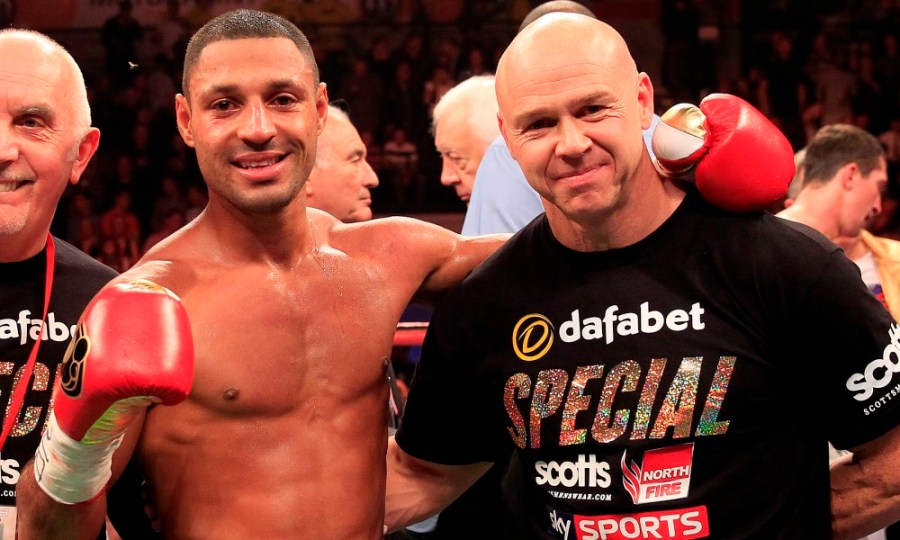 Trainer Dominic Ingle sees big fights down the line for Brook, if he beats Porter

Kell Brook’s trainer Dominic Ingle believes his Brook’s World title clash with Shawn Porter is a 50-50 fight – but is confident his man has the tools to rip the title from the American in California, live on Sky Sports from 2am on Sunday August 17.

Brook finally fights for his first World title after a frustrating period in his career with three fights against previous title holder Devon Alexander cancelled through injuries to both men.

The unbeaten Sheffield star has arrived in California after completing his training camp in Las Vegas, and Ingle says that the 28 year old could not be better prepared to claim the title.

“The setbacks have given Kell more time and it’s made him realise that he has to be 100 per cent prepared mentally and physically which he is,” said Ingle.

“By the time he steps into the ring on Saturday night, he’ll have been in camp for 16 weeks which is probably twice as long as he’s ever done. He usually does eight to ten weeks and crams it all in, but this time there’s been no stone left unturned, everything has been executed to the best of his ability, he’s done two trips to Spain, we’ve had Sheffield Hallam University monitoring his progress and they are in LA with us. We are expecting Kell to turn up on the night and become world champion.”

Porter took the title from Alexander in December and stopped Paul Malignaggi in April in his first defence and is the favourite to hold on to his belt on Saturday night. Both men carry unbeaten records into the ring with Brook on a run of four consecutive stoppage wins, and Ingle believes that there is little to choose between the two men.

“Shawn Porter is no Floyd Mayweather or Manny Pacquiao,” said Ingle. “He’s similar to Kell really, he’s never fought anybody that I would consider a big name. Alexander and Malignaggi have both had their day and before them fights he didn’t look remarkable. People can say the same about Kell though, he’s never fought anybody and he’s looked a little ragged at times especially against Carson Jones, and the only ‘name’ on his record is Vyacheslav Senchenko who he demolished in four rounds.

“So to me it’s a 50-50 fight. In England, Kell would win the fight 100 per cent. We’re up against it in California but he is 28 years old and he has to take his chances when they come. It’s maybe 60-40 for Shawn because it’s in America but it’s not a fight I see Kell Brook losing.”

The famous Wincobank Gym in Sheffield has been littered with World title winners masterminded by the Ingle family, and Dominic is in no doubt that Brook must impose himself on the champion to join the likes of Prince Naseem Hamed and Johnny Nelson as another Wincobank World ruler.

“Kell is going to try to create that distance and he’s going to have to force his game on Porter,” said Ingle. “Looking at Porter’s last two fights he was a clean fighter before them but with Alexander it was a scrappy fight, hitting and holding and some spoiling tactics – neither of them knew who had won the fight because it was so difficult to score. It was the same against Malignaggi until he clipped him and stopped him.

“It has got the potential to be the fight of the year but it also has the potential to be a very scrappy match. It doesn’t matter really, Porter will do what he thinks he needs to do to take Kell out of his stride, and as long as everything stays within in the rules that’s not a problem. Kell is the cleaner puncher, he’s the more skilful fighter, he picks his shots better and he’s got the better skillset, but we’ll see on the night.

“The level of opposition is not stratospheric. Shawn is not a man that cannot be beaten, he’s had a draw in his career against ordinary opposition. If Kell turns up on the night like he can do, then Britain is going to have another World champion.”

The winner on Saturday will be eyeing up blockbuster clashes in their fights to come, with the likes of Timothy Bradley and Amir Khan mooted opponents and the carrot of big-money fights with Mayweather and Pacquiao always on the horizon in the star-studded 147lbs division.

“Every fight is make or break,” said Ingle. “Had he not won the last fight he wouldn’t be in the position and the same with the fight before that. Every fight at the top level is make or break, it’s just that some fights are eliminators, some fights put you in position to get to world title fights and some fights have a World title on the line. It’s going to be a great experience for Kell as he has got to go into the lion’s den with everything against him and the only thing he has got is his ability and his desire to become a World champion. There will be no excuses if he doesn’t win but from what I have seen in his training and sparring, I expect Kell to win on Saturday.

“Kell has been fighting for almost 20 years now, this is what he’s been training for all of his life. Neither Kell nor Shawn Porter are that highly regarded by American fight fans, the press and probably not on the radar of the Pacquiaos and Mayweathers. Win this fight and people pay attention and it will lead Kell to the big fights with Khan and possibly Mayweather and Pacquiao down the line, and even someone like Miguel Cotto. There’s nothing better than going to America and beating an American, everyone loves a transatlantic clash – American fighters think that they are the best and we think that we are the best, it really creates the interest and if Kell can beat Porter it really sets him up for the big fights and Eddie Hearn can deliver them.”