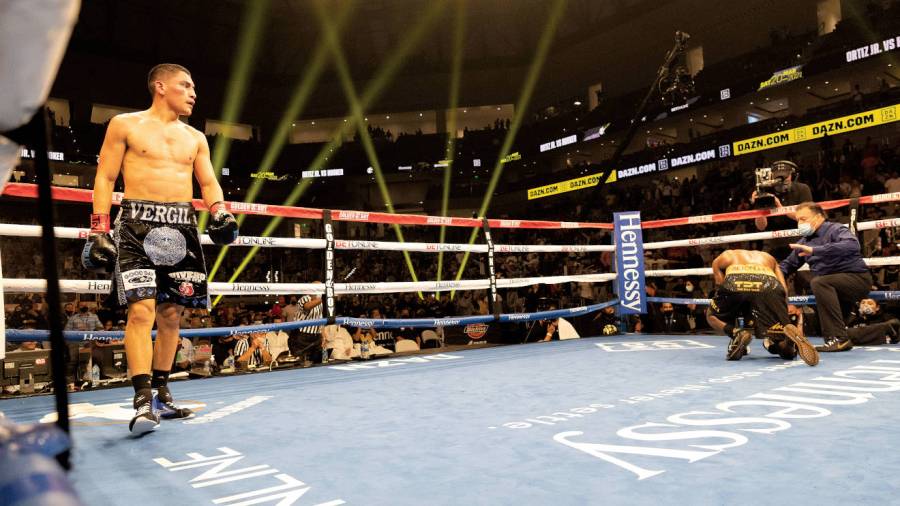 ALTHOUGH he was a huge underdog entering the ring against Vergil Ortiz Jnr, Maurice Hooker’s confidence was high. ‘Been there, done that,’ was probably running through his mind as he awaited the opening bell.

It was a little over two years ago when Hooker, now 31, was in a similar situation when he was matched with a highly-touted unbeaten prospect who was using him as a springboard to stardom. It never happened though; Hooker, then the WBO super-lightweight boss, successfully defended his belt by stopping the fancied Alex Saucedo. Within a year, Hooker would lose his belt to Jose Ramirez but he knew that victory over Ortiz would put him back in the world title picture, this time at 147lbs.

With stablemates Terence Crawford and Jamel Herring accompanying him to the Dickies Arena, Hooker had the swagger of a champion in waiting. But shortly after the first round of the Golden Boy-promoted main event got underway reality struck. Ortiz came out not only firing but landing with such force that it was easy to see why none of his previous 16 opponents made it past the seventh round.

Hooker had a fight plan but he was forced into survival mode before it could be executed. It seemed as if every punch Ortiz threw was designed to end things. And Ortiz threw many as he marched forward, attacking relentlessly. Hooker, to his credit, jabbed and jabbed and kept on the move as his trainer Bo McIntyre told him to keep off the ropes.

By the third round Hooker had settled in it seemed. Those leads were reddening Ortiz’s face but, by way of retort, body blows were hurting the older fighter. It was a home game for both Texans – Hooker from Dallas and Ortiz from Grand Prarie – yet the crowd’s loyalty was with the 22-year-old.

That did not deter Hooker who was growing in confidence and carrying the fight to Ortiz in the fourth round after stunning him with an overhand right. Ortiz, though, is a special fighter. He roared back in the fifth round with a blistering body attack that continued into the sixth. Late in the round, Hooker could take no more and crumpled to the canvas from a barrage of blows. He reluctantly pulled himself up late in the count.

The torrid pace that Hooker thought would undo Ortiz had undone him. It came as no surprise that the scheduled 12-rounder ended at 36 seconds of the seventh when Hooker turned away in pain and took a knee after getting hit with a right. It was claimed he injured his right hand on contact from the blow. Referee Laurence Cole, upon seeing this, stopped the fight. At the time of the stoppage Ortiz led by scores of 58-55, 59-54, and 60-53.

Ortiz turned to Crawford at ringside and reiterated the challenge he had made before the fight. “I don’t care whether I’m ready or not,”  said Ortiz, “I want that fight.” Errol Spence who sat ringside has still shown no inclination to box Crawford which makes Ortiz’s attitude all the more refreshing.

A right dropped Ortiz in the second round and she felt Estrada’s power throughout, but settled down and scored with many good blows of her own. Estrada was shifty alternating between lefty and righty. She picked her spots beautifully and by the end Ortiz’s eyes were badly swollen. The decision was a fair one, but it can be argued that the lopsided scores were a bit extreme.

Buenos Aires’ Marcelino Lopez dropped Jairo Lopez in the second, third, and disputedly in the fourth, then polished him off at 1-24 of the fifth of their scheduled 10. The Mexican gave it all he had in the fourth round, but when he went down once again in the fifth, he made no effort to get up, spitting out his mouthpiece and listening to referee Mark Calo count him out.

The Verdict Hooker’s career at crisis point but Ortiz looks like the real deal.