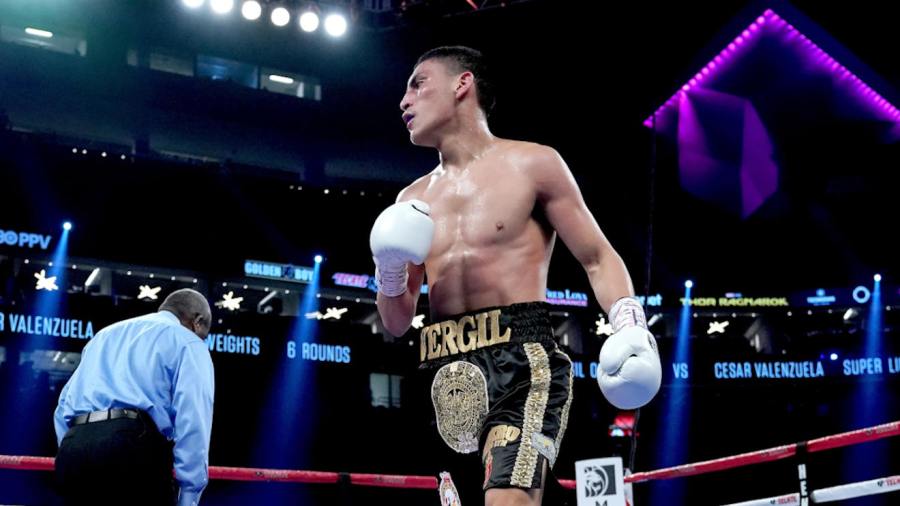 Vergil Ortiz was meant to be fighting on Saturday. Having to pull out with illness has derailed him temporarily, but he'll be back on a road to the top. He spoke to Thomas Gerbasi

THE riffs are heavy, fast and accurate, almost resembling the punch output of Vergil Ortiz Jnr. But when the welterweight contender was preparing for Saturday’s bout against Portsmouth’s Michael McKinson (he had to pull out this week due to illness), taking the stage as a guitarist is far from his mind.

“I don’t think I have enough confidence for the whole band thing yet,” Ortiz told Boxing News. “It’s just leisure. I like learning my favorite songs and new stuff, in general. And it sounds cool. I need to practice a little more, and I’ve never jammed with anyone, so I’m not ready for anything yet.”

Maybe not the music business (and for the record, he’s being modest about his development as a musician), but as far as taking the stage in the boxing world, the 23-year-old is more than prepared for the spotlight. There are bigger stages, ones that include fights against the biggest names in the division – Errol Spence Jnr, Terence Crawford and Jaron Ennis to name just three. It’s enough to make a young man impatient, but Ortiz already knows the business, so he’s content with taking everything a step at a time.

“I know it’s a process,” he said. “It’s not like I can just ask for it and get it. A lot of people are already world champions and they’re not getting the fights that they want, so I know that me, not having a belt or nothing, I’m not gonna get the fights that I want right now. And I know it’s gonna happen; I just gotta be patient and my time will come.”

That’s unfortunate, for Ortiz and fight fans, because at 18-0 with 18 knockouts, a slate that includes victories over the likes of Mauricio Herrera, Antonio Orozco, Maurice Hooker and Egidijus “Mean Machine” Kavaliauskas, he has proven that he’s ready to challenge the best. Proving to be deserving and getting what one deserves are two different things in this sport, though, so in the meantime he’ll have to wait for his dream fight. Does he have any idea who will be in the opposite corner for such a battle?

“A dream fight?” he muses. “I do have a name, but I feel like I’ve said it too much and I just don’t want to give anyone any more recognition than I need to. So I do have one.”

He doesn’t even have to say it, as we’ve all heard Ortiz call for a showdown with fellow Texan Errol Spence Jnr, who is currently preparing for a bout with fellow belt-holder Yordenis Ugás on April 16. Then there’s always Terence Crawford, another titlist, and a fight most hardcore fans want most of all against fellow unbeaten rising star Jaron “Boots” Ennis. So what happens down the line? Is it a fight with Spence for the belt, or will his shot at gold come when he and Ennis both get to the top?

“I think there’s a high probability of both happening,” said Ortiz.

He laughs when I suggest that he’s an optimist. In the meantime, he fights whoever is placed in front of him, does his job and then hopes for the best. That attitude has garnered him a sizeable fan base, not up to the standards of his Golden Boy Promotions stablemate Ryan Garcia, but enough that plenty of eyes are on his every move. That’s a development he saw for the first time when he halted the veteran Herrera in three rounds on the Canelo Álvarez-Daniel Jacobs undercard in May of 2019.

“I noticed right after that I started getting noticed more,” Ortiz said. “My followers more than doubled and it shot up, big time. And I know followers isn’t a thing, but it kinda is – it shows how many people like you, how many people follow you. It’s not an exact number, but it’s very relative to how many fans you’ve got. So after I knocked out Mauricio Herrera, that’s when I started seeing a really bright future.”

It is bright, and perhaps no up-and-comer in the sport has one as bright outside of Ennis. “Every fighter that I go against has a chance at beating me, and it’s my job to make sure those chances are as close to zero as possible. This isn’t a sport where you play around, so I treat every fight as if it’s a championship fight because it might as well be. A loss could send my career somewhere else, and not towards the belt. So every fight, in my opinion, is a world championship fight. We don’t take anyone lightly over here,” he said.

That’s a lot of maturity and focus for someone at an age where that isn’t usually the case. “I wouldn’t separate myself too much from the 23-year-olds these days,” he laughs. “I like to play games, I like to make memes, I laugh at stupid stuff all the time. I’m the same guy, just sometimes I have to act professional. I’m just like any other 23-year-old. I just happen to fight.”