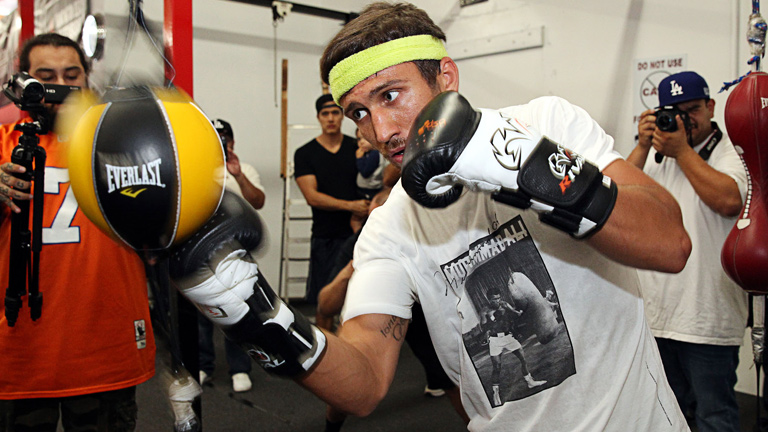 Vasyl Lomachenko is a man of few words yet his ability speaks a thousand, writes Oilver Goldstein

SURGEON at the operating table, master painter at the easel—pick the metaphor you want, and none comes close to describing the precision Vasyl Lomachenko, the Ukrainian featherweight champion and amateur phenom, brings to the ring. Surgical, masterful, painterly: all fit, and yet all fall short of encapsulating the phenomenology of Lomachenko in the ring. Boxing tends these days to do well with metaphors that don’t really describe anything—hyped, superstar, whatever—but Lomachenko’s so far spent his short time in the professional ranks exhausting boxing’s always exhaustible vocabulary. Beginning his career against Jose Ramirez, a seasoned pro then with a 25-3 record, Lomachenko proved immediately his determination to vault straight from hyped to something far more befitting his talent.

Hyped: so often professional boxers are willing to rest content with this label, getting hype and spending it, not listening to the hype, being the hype, whatever. At the very start of his career Lomachenko said precisely what everyone has always known, if not in so many words: Hyped, if not quite an insult, is certainly no compliment. No one wants hyped; they want the real thing. “It’s not as hard turning professional as it seems to be,” Lomachenko told Boxing News over the phone via his manager, Egis Klimas. “I think I’ve already showed my power—in my third professional bout I became a champion, so it doesn’t mean it has to be very hard.”

The message isn’t, though, that Lomachenko is in any way afraid. Rather Lomachenko’s reticence describes something else: the question is meaningless because of course he’d like to fight Santa Cruz or Frampton or Rigondeaux, of course—when you’ve got talent and skill and style to burn ad infinitum, the idea that you might want to tarry in a sport as fraught as boxing is nonsensical. “That’s all I want. I just want to get the big names in my career.” The notion that one should fight the best is so self-evidently obvious to a fighter like Lomachenko that it barely registers as a consideration. It’s a way of thinking too few fighters seem willing to embrace.

On June 11 at Madison Square Garden, against Roman Martinez, Lomachenko won his second world title in as many weight classes. That wasn’t the plan initially, as his promoter Bob Arum had tried putting together a clash with unbeaten Nicholas Walters, ‘The Axe Man’ by nickname and at least somewhat by nature: Walters sent ripples through the featherweight division when he ripped Vic Darchinyan and Nonito Donaire in succession back in 2014. Why didn’t Walters, offered a career-high $550,000 for the bout, fight Lomachenko then? “You know what the odds are fighting a fighter like Lomachenko,” Walters told Anson Wainwright of The Ring back in May. “You’re not going to beat him on a decision; you got to knock him out. I fought (Jason) Sosa and I beat him clearly and they called it a draw. What do you think if it was Lomachenko? I would have a loss on my record. You have to know what the odds are when you take a fight, so the odds with taking a fight with Lomachenko, you have to knock him out to win.”

Fighting Lomachenko for $550K, in Walters’s words, meant going home “with nothing”. But Walters’s demand for a bigger prize equally misses a much bigger picture. Lower weight fighters like Lomachenko and Walters practising in America need one another: stars at the lighter weights aren’t born in vacuums. What made Manny Pacquiao so special and so lastingly popular wasn’t just Manny Pacquiao, after all; it was also Juan Manuel Marquez, and Erik Morales, and Marco Antonio Barrera, fighters all at some stage at the same weight class and with talent of their own to burn. A good dancer needs an equally good dance partner: a good fighter needs another good fighter if he’s truly to tango. Lomachenko knows all this. “I already told him everything,” he said to BN when asked if he had a message for Walters after their missed fight. “I already told him everything. I’m not trying to talk about that. He’s the past.”

Doubtless Martinez looked to Lomachenko’s one defeat in the pros, a debatable second fight split decision loss to Orlando ‘Siri’ Salido, for inspiration.

That night, Salido came in looking about three weight classes bigger than his Ukrainian challenger. This in itself tells its own story: before the fight, and throughout it, Salido sought whatever advantages he might gain through means that might best be described extra-judicial. Overweight, low-blowing, Salido quarried whatever advantage he could find. Having as referee Laurence Cole, whose only competence might lie in being always defiantly incompetent, certainly helped.

Even though Lomachenko came back to win his first world title in his next bout, a whole three instead of two fights into his career, the Salido fight remains a nagging memory. When BN asked Lomachenko whether he had any concerns about moving up in weight given the mugging a larger Salido was able to perform, Klimas, translating, quickly scoffed: “Are you guys gonna forget any day about that Salido fight or what?”

The answer is revealing: even if Klimas’s tone isn’t unfriendly, there’s an edge to the response, a tetchiness, which says something about the way Lomachenko’s team feel about that bout. Certainly Lomachenko is unconcerned about any weight rise. “Everything is going well,” he told BN. “For me it’s not a new weight class, it’s a regular weight class. Everything goes by the plan.”

That plan is formulated by Lomachenko’s father, his trainer from childhood. But its simplicity is also revealing: “1-2, 1-2, 1-2, uppercut, 1-2, 1-2, uppercut,” Klimas said, half-jokingly, when BN asked Lomachenko how he might approach the fight. In a sport as profoundly embodied as boxing, and with a fighter whose body thinks as fast and as well as Lomachenko, describing a pre-formed plan simply becomes redundant. Decent fighters have a plan, but special ones have a repertoire.

Moreover if Lomachenko’s repertoire was found insufficient against Salido, his fights since, against Gary Russell, Jr., Chonlatarn Piriyapinyo, Gamalier Rodriguez, and Romulo Koasicha, suggest that he might just have added to it. Indeed what cost Lomachenko in his bout with Salido, at least to some degree, was a reticence to force the action through the first half. This might have owed something to the Ukrainian’s never having been further than four rounds before, and if there’s anything by which to recommend a slower seasoning of a fighter then it’s at least that they might learn how best to go the distance in future. But then the Salido fight equally told Lomachenko how easily he could do twelve: in the final round, it was the Ukrainian ragdolling the much bigger and much more experienced man about the ring.

And when ‘Hi-Tech’ Vasyl fought next, against the much-hyped Russell, Jr., that knowledge of the distance told. Then, it was Russell, Jr., with a record of 24-0, who was made to look like a boy in the ring with a man—even if that man had at the time just two pro fights, and was 1-1.

The boy from Bilhorod-Dnistrovskyi, Ukraine, is doing well. And he threatens to do even better in future: “After 130 I almost guarantee 100% I’ll be up to 135,” he told BN. “After that, it’s hard for me to say.” Maybe to welterweight? “We’re talking about the future. I can’t answer that.” Lomachenko’s reticence, again.

There’s something oddly endearing about this characteristic, something somehow entirely in keeping with Lomachenko as a fighter, who doesn’t necessarily fight reticent, yet who also at his best looks strangely self-contained, almost self-entranced, locked into the fight by virtue of being locked into himself: Lomachenko’s reticence is an extension of Lomachenko’s control. It’s the feature that distinguishes him from the several other Eastern European fighters making hay in America at present, in particular Sergey Kovalev and Gennady Golovkin. Kovalev talks as he fights, like a man always on the verge of some dire trangression, and Golovkin without speaking much English is somehow the most eminently knowable fighter there is: Golovkin wears his face in his smile. Lomachenko is reticent because Lomachenko knows. He doesn’t want to be famous, preferring, as he told Ukrainian magazine WUMAG in 2008, anonymity away from Bilhorod-Dnistrovskyi. Lomachenko wants no more than to be the best fighter possible.

In the same 2008 WUMAG interview, the Ukrainian tells a particularly striking story from his amateur days, when, on the way to the first of his two Olympic gold medals at Beijing, he would give his opponents small Ukrainian flags before the first bell. “This flag-giving ritual began in 2004,” Lomachenko explained then. “Once, my father and I went to the Pechersk Lavra Monastery in Kyiv, and near the entrance, at a souvenir stand, we saw little icons, crosses and small-sized Ukrainian flags. My father bought several of them, and at the next competition I took part in, I gave these flags to my opponents. I find it to be a sort of a sign of respect for my opponent on the one hand, but on the other, it was also a sort of a hint—“See, who’s stronger?” And since I’ve always come out the winner, the hint proved to be true.”

On the face of things there’s little aggressive in the gesture: Lomachenko gives flags as a sign of respect, friendly cordiality, whatever you will. But that cordiality, that refusal to act the stereotypical fighter, tells its own story. Because Lomachenko is so in control of himself, he’s able also to control the course of events: “See, who’s stronger?” In the next rendition of this little ritual, expect Lomachenko to provide the answer again.

This article was originally published in Boxing News magazine.