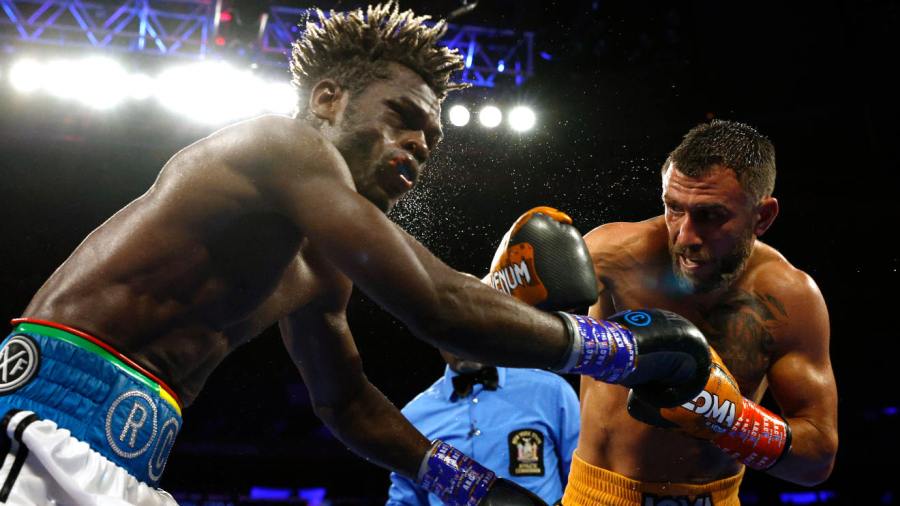 With the world's top lightweights all in action over the last three weeks, Vasiliy Lomachenko puts in the most convincing performance, writes Sean Nam

IN a topsy-turvy, three-week span that saw virtually every top lightweight in the world step into the ring, it may have been the veteran who put on the most convincing performance. Former unified lightweight titleholder Vasiliy Lomachenko inched closer to reclaiming his former perch in the division after he roughhoused the durable Richard Commey over 12 rounds in front of a reported crowd of 8,555 at Madison Square Garden in New York City.

After being on the cusp of a stoppage in the middle rounds, Lomachenko had to settle for a comfortable decision: Judges Tony Paolillo (117-110), Eric Marlinski (119-108), and Tom Schreck (119-108) all had the Ukrainian winning wide.

Giving up advantages in size and length, Lomachenko relied on his usual feints and nifty footwork to get the better of his Ghanaian adversary. But Commey, a former lightweight titleholder himself, was able to stymie some of Lomachenko’s dexterous movement early on by repeatedly firing right hands to the body. He would not be able to keep this up, however.

By the third round, Lomachenko was in free-flowing motion: ducking under wide hooks, flitting in and out of range, firing jabs, and connecting with left hands on the heels of one of his trademark pirouettes. In one instance, he drilled Commey with a left hand smack dab in the Adam’s apple. Commey, to his credit, handled the blows well and continued to stalk after his elusive opponent.

The end seemed apparent in the seventh round, when Lomachenko dropped Commey with a hard left hand during the clinch. Commey seemed slightly unsteady, but he was able to beat the count administered by referee Steve Willie. Sensing that Commey was too battered to continue, Lomachenko, in a surreal exchange, began motioning with his glove at Commey’s corner to stop the fight. After landing another of pair of left hands on Commey, Lomachenko again implored Commey’s corner to throw in the towel. But the suggestion went unheeded. It turned out to be the right decision, as Commey managed to regain his senses and survive the round – and the remainder of the fight.

Despite the somewhat anti-climactic ending, Lomachenko showed once more why he remains one of the division’s most formidable fighters. This was his second victory since dropping a unification bout to Teofimo Lopez last year. The Commey bout was supposed to serve as a launchpad for an enticing rematch, but Lopez suffered one of the year’s biggest upsets against Aussie George Kambosos in late November. A week later, top talents Gervonta Davis and Devin Haney took to the ring in separate bouts, but both had their hands somewhat full against Isaac Cruz and Joseph Diaz, respectively. Postfight, Lomachenko expressed his eagerness to get into the title mix again.

Asked if he would be interested in challenging Kambosos in his hometown of Australia, Lomachenko did not hesitate to respond in the affirmative.

“Yes, of course,” he said. “I need this chance. If he gives me the chance, of course I will take it.”

Jared Anderson continues to tear through his opposition. The flashy, 22-year-old blue-chip American made short work of Ukrainian Oleksandr Teslenko with a second-round stoppage in an eight-round heavyweight bout on the undercard (Top Rank promoted). After fighting mostly in the southpaw stance in the opening round, Anderson switched back to orthodox in the second, whereupon he continued to pummel Teslenko from pillar to post. He finished the job with an overhand right that caught Teslenko on the temple. Although Teslenko beat the count, referee Danny Schiavone determined he was on unsteady legs and waived off the bout. The official time of stoppage was 1-33.

Anderson has knocked out every single one of his 11 opponents.

Keyshawn Davis showed why he might be the best American prospect in the sport. The 22-year-old American Olympian used every punch in the book, dropping Jose Zaragoza twice en route to a dominant second-round stoppage.

In the second round, Davis cracked Zaragoza with a left hand to the liver that sent the Mexican crashing to the canvas, writhing in pain. Referee Charlie Fitch promptly stopped the fight at 2-51.

Nico Ali Walsh – the latest nepotistic marketing concoction in boxing – went the distance for the first time in his career, picking up a majority decision over undistinguished but game Reyes Sanchez in a four-round middleweight bout. Scores were 38-38 (Allen Nance), 40-36 (James Kinney), and 39-36 (Robin Taylor).

The grandson of Muhammad Ali hardly looked the part of his namesake. Late in the second round, it looked as though Ali Walsh, a native of Chicago, would make it a short night after connecting on a looping right hand that wobbled the Californian. But Sanchez would respond in the third round, landing two straight right hands on the inside. Moments later, Sanchez landed yet another pair of right hands while Ali Walsh was on the ropes. Sanchez closed out the round strong with another flurry that had Ali Walsh’s head snapping back.