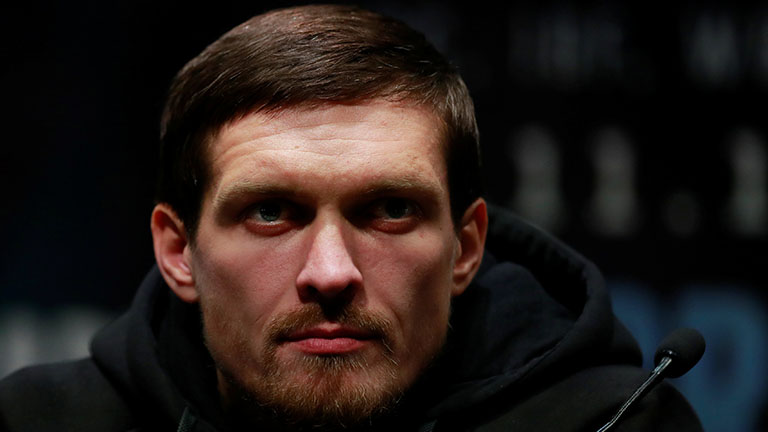 CONSIDERING he boxed three times in 2018 and was arguably the standout fighter of that year, it’s strange to think Oleksandr Usyk will have been inactive for almost 12 months by the time he touches gloves with his first professional heavyweight opponent on Saturday (October 12) at Chicago’s Wintrust Arena.

He deserved a break, no question. He deserved a break more than any fighter in the sport, in fact. Yet the gap-toothed genius’ presence has been sorely missed and his debut as a heavyweight is now eagerly anticipated.

In case you have somehow forgotten, last year Usyk defeated Mairis Briedis in January, Murat Gassiev in July and then Tony Bellew in November. The Briedis and Gassiev wins delivered Usyk, 16-0 (12), the World Boxing Super Series trophy, while the knockout of Bellew, secured in the eighth round, introduced him to a British crowd for the first time. As far as calendar years go, it was as good as it gets, especially when you factor in the Ukrainian achieved all this at cruiserweight, hardly a division awash with opportunity and profile.

Usyk, though, the WBA, WBC, IBF and WBO king, was a different kind of cruiserweight. Cruiserweight in name only, he boasted the speed, agility and punch output of a middleweight, and performed with a style and charisma unfamiliar to a weight class shoehorned between light-heavyweight and heavyweight. Some have called him the greatest cruiserweight the sport has ever seen. Few will dare to argue.

Now a heavyweight, Usyk’s first opponent in this new habitat was supposed to be Tyrone Spong, known as ‘The King of the Ring’ but unfortunately known more for his exploits in kickboxing rings than boxing rings.

But an even greater misfortune is this: on Tuesday (October 8), promoter Eddie Hearn revealed there had been an adverse finding in one of Spong’s pre-fight VADA (Voluntary Anti-Doping Association) drug tests, throwing this fight, Usyk’s heavyweight debut, into disarray.

“We have been contacted by VADA to inform us that there has been an adverse finding in Tyrone Spong’s test,” Hearn said. “It has been sent to the State of Illinois commission. We have reserve opponents standing by.”

Spong had yet to be removed from the bout at the time of going to press, yet, in light of recent controversies surrounding heavyweight fights and adverse findings in drug tests, it would come as a surprise to see this one go ahead as planned. More likely Usyk fights someone else and Spong gets the requisite slap on the wrist.

If he doesn’t, if this fight somehow still takes place, all you need to know about Tyrone Spong are the following details. As a high-level kickboxer, the 34-year-old boasted a record of 91-7-1 (1 No Contest) and, in 2014, made the final of the Glory light-heavyweight tournament, only to fracture his leg against Gökhan Saki.

Since that defeat to Saki in 2014, Spong has focused solely on his hands. He made his pro boxing debut in March 2015 in Germany and has competed in Russia, the USA, Mexico, the Dominican Republic and Suriname, his homeland. He has so far completed just 32 rounds.

Ten of those were spent in the company of Ytalo Perea, a limited Ecuadorian who loses to most decent heavyweights he faces, last December. Spong edged that one via split-decision, as close as he has come to losing, and, ominously, Perea was then stopped inside a round by Martin Bakole nine months later.

If Saturday’s fight goes ahead, Spong’s combat seasoning could be enough to keep him reasonably competitive against Usyk early, but it’s unlikely to win him rounds or the fight. Toughness, after all, is no substitute for technique, and while Spong’s toughness, thanks to 100 kickboxing fights, should not be questioned, his technique, as a boxer, is so inferior to Usyk’s the contest seems, on paper, almost unfair.

At least, if they meet, the two are physically similar. Southpaw Usyk, at six foot three, will enjoy an inch advantage in height over Spong, 14-0 (13), and shouldn’t be too much lighter given Spong typically weighs between 225 and 230 pounds as a heavyweight and Usyk has had a year to put on muscle mass.

In the end, though, once you get past the numbers, all these two have in common is the fact they are heavyweights with a rich history in combat sports. Spong’s history is in kickboxing; Usyk’s is in boxing. On Saturday night they will have a boxing match.

Then again, maybe they won’t.

Bivol, one of many promising light-heavies from Eastern Europe, won his belt in 2017 with a first-round knockout of Trent Broadhurst in Monte Carlo. Since then, however, he has been taken into the 12th round in each of his four subsequent defences. Sullivan Barrera, his first challenger, was stopped in the last round, but Isaac Chilemba, Jean Pascal and Joe Smith Jnr all heard the final bell.

Castillo, a Dominican outpointed by Marcus Browne and Joseph Williams, is a considerable step down in quality from those opponents and could be on the receiving end of Bivol’s first stoppage victory since March 2018.

Also on the Chicago undercard, Jessica McCaskill, the WBA and WBC super-lightweight champion, defends her belts against Erica Anabella Farias, 26-3 (10), in a rematch.

These two fought for the first time last October, back when Farias was WBC champion, and that night McCaskill, 7-2 (3), took a 10-round decision. The all-action American then added the WBA title to her collection with a decision win over Anahi Esther Sanchez in May.

With two belts up for grabs this time around, McCaskill and Farias have plenty to fight for and the Argentine, still smarting from her loss 12 month ago, has more than just revenge to gain.