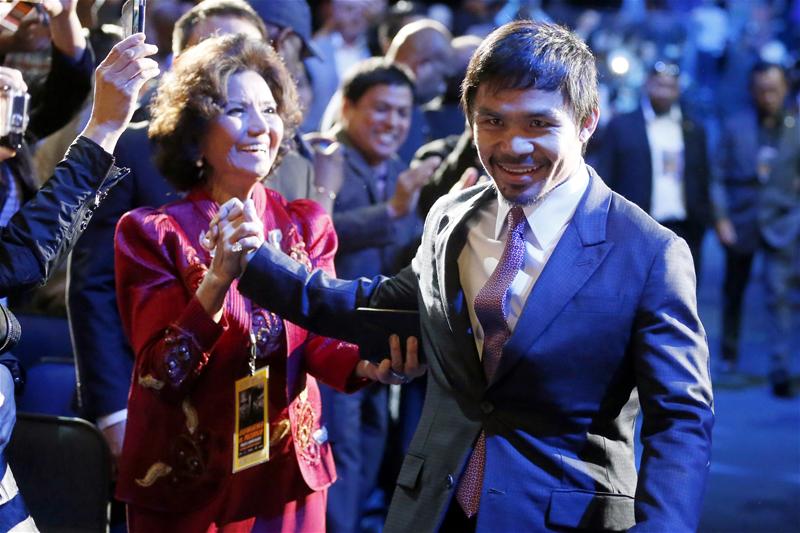 A FEW more days of hype are left before the insanity ends.

We have read enough on Saturday’s Floyd Mayweather–Manny Pacquiao fight that surely no new angles are left unless we decide to invent one.

I won’t be in Las Vegas this weekend. I never applied for press credentials. Did not have the urge to. Perhaps more so than any other media member I have had the up close and personal experience of interacting with both men during the highlight of their careers, Manny Pacquiao when he was awarded the “Fighter of the Year and Fighter of the Decade” awards by the Boxing Writers Association of America and Floyd Mayweather when he was awarded the “Fighter of the Year” award by the same group. I had also interacted with Mayweather at another award ceremony earlier in his career. Go to You Tube and search for ‘Mayweather BWAA’ and ‘Pacquiao BWAA’ to see me presenting them their awards.

To be quite frank I did not bond with either man despite the magnitude of the moment. There is a great photo of myself and Pacquiao locking eyes and smiling at each other, but as warm as the interaction appeared it lasted only a fraction of a second at the most. Basically the Pac Man completely ignored me despite my having an arm around him as the photographers frantically clicked away.

With Mayweather it was not much different. When I finished my glowing words and called him up to receive his award, he strode up to the podium with a cup of Starbucks coffee and extended his hand. After the quick handshake there was no further interaction between us. I did have the best view in the house standing right behind Mayweather (as I had with Pacquiao) when they delivered their speeches.

What I took out of my insider’s view allows me to play amateur psychologist (LOL) to determine who will win Saturday evening:

During the speeches both were generous in giving praise to others for their success, Mayweather even more so.

Both interact with the public very well. Both do it out of a sense of obligation, but Mayweather seems to slightly enjoy it more. Mayweather was a little more approachable at the banquets.

Mayweather seemed very calm in giving his speech, Pacquiao showed traces of nervousness. Perhaps the language barrier played a small role in that.

Mayweather cares about his persona more than Pacquiao, trying to cultivate an image. Mayweather had security that matched that of a head of state. Pacquiao’s security was more in line to keep fans from mobbing him.

I was under the impression that winning an award meant more to Mayweather than it did Pacquiao. Not once has Pacquiao gloated about winning the “Fighter of the Decade” award over Mayweather. On several occasions Mayweather has complained about the boxing writers not having voted it to him, pointing out that unlike Pacquiao he has never lost.

Mayweather claimed bias resulted in Pacquiao being chosen over him. While I don’t agree with that statement at face value, Mayweather’s flamboyant image certainly did not help him in the voting.

As BWAA president at the time, I had access to the ballots and announced the result, but not the vote total. Here for the first time I will reveal in public that Pacquiao outscored Mayweather by an overwhelming 3-1 margin in the balloting. Mayweather barely edged Joe Calzaghe for second. For what it is worth my vote was cast for Mayweather.

As journalists we are supposed to always remain neutral, but that only happens outwardly. We normally find ourselves rooting for one man over the other. I would love to see Pacquiao spring the upset, but I also want to see Mayweather keep his perfect record intact. Both can’t happen, but at least they are finally fighting. For that our sport is better off.