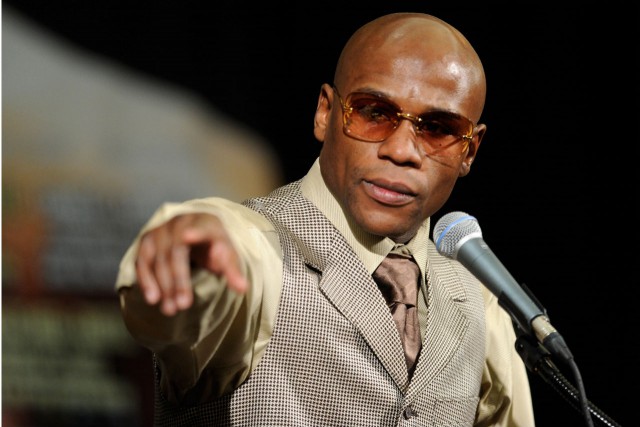 James Slater wonders who will show the Floyd Mayweather-Manny Pacquiao showdown in the UK?

FIGHT FANS the world over are still rejoicing over the recent announcement that the fight everyone has wanted to see for over five years – Floyd Mayweather vs Manny Pacquiao – is at last official for May 2.

It remains to be seen, though, where British boxing fans will be able to see the fight.

In the U.S, Showtime and HBO, who will each carry the richest fight in the history of the sport, are reportedly set to charge armchair fans a record $99.95 (£65) for the blockbuster that will go down in Las Vegas.

It has been reported that Sky Sports, BT Sport, BoxNation and even ITV will bid for the rights to show the contest in the UK. Sky Sports will undoubtedly be the favourite and it seems likely they would charge more than their usual £17.95 Box Office purchase price.

Mayweather-Pacquiao is so big, and so potentially exciting, that fans are likely to part with however much cash is asked for to see the welterweight unification showdown. According to the Daily Mail, ringside fight tickets, at the cost of $5,000 (£3,300) face value, are already on the black market for a staggering $20,000 (£13,000). The MGM Grand is a relatively small venue, certainly for a fight of this magnitude and it seems likely the majority of tickets will be snapped up by the rich. For those boxing junkies who are in Sin City and cannot gain entrance into the 16,000 seat arena that special night in May, The MGM and it’s various properties will be showing the fight on closed circuit, the fee a hefty $200 (£130).

And whichever UK TV channel it is that secures the rights, the whole world will be watching in May. Mayweather-Pacquiao looks set to smash all previous records for number of viewers tuning in.

Perhaps the luckiest fans – aside from those who will pull up a ringside seat – will be the many millions of Filipinos, who will be able to watch their idol attempt to take Mayweather’s belts and unbeaten record via large screens that will be set up in city parks and squares. The party in the Philippines will last for many days should Pac-Man pull off the victory.