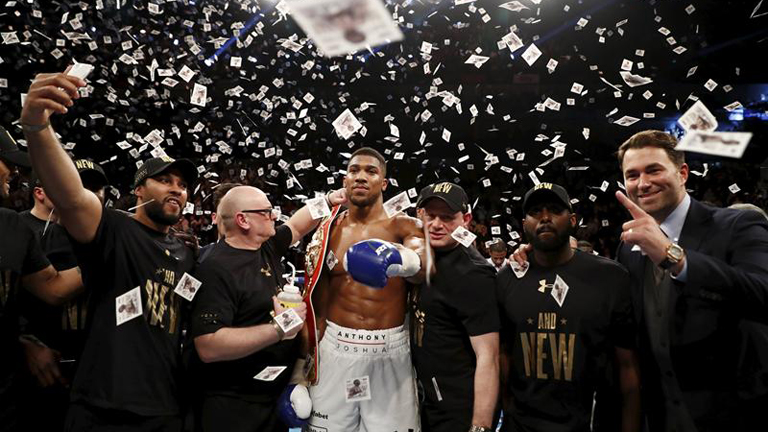 2017 has been a banner year for British boxing, the headline attraction being Anthony Joshua’s victory over Wladimir Klitschko in front of 90,000 supporters at Wembley Stadium. The vibrant health of the sport in the UK has caught the attention of American promoters.

Speaking to Boxing News, Kathy Duva, head of Main Events promotions, said, “It was fantastic. That’s what the heavyweight title should be and it’s been so long since it’s been that way. The Hearns have done an amazing job with him and the sport in the UK.”

There is an envy of the British scene and the perception that it is starting to rival the USA. “What they have done in the UK where they’ve got one market and got the TV station, they’ve taken it and they done so much with it. Made the UK competing with the United States as the premier destination to make money in this business. That spectacle, the stadium and all that, it was tremendous. It was fun to watch on TV. It must have been amazing to be there,” Duva said. “I wish we were in one homogeneous market where we could do that here. We are in 50 markets and it’s a much trickier path to get to that.”

She explained the difficulties for promoting boxing in the US. “Not just boxing, we’re talking about football, baseball, basketball, hockey. So many major league sports here and there’s one in every major city. You’ve got soccer, that’s it. Big difference. Then we’re in 50 markets instead of one or two. And none of them are homogeneous. So in California you’ve got maybe people who are interested in more Mexican kind of stuff, then there’s the east Coast. You’ve got different stuff in the middle, you’ve got different people. And now we are getting TV dates and we have find arenas to put things in on those dates and we have to line them up. Meanwhile arenas are booking events years in advance. So now I’ve got to get lucky and hope that an arena in a market where I want to be is available on the night that I get a date. Whereas they’re in a position to be able to, say, I bet they’re in a position to be able to give you Sky’s boxing schedule for two years and they can go to the arenas and they can book the dates. Whereas we’re just in a different situation here and it’s harder than people realise,” she said.

“But we keep pushing on. It’s a very different thing. It really is. Even with TV. Trying to get a TV date more than two [years] in advance, it’s really hard to get them to commit. I had a series on NBC a couple of years ago and where I had dates a year in advance and I was like oh my god this is so great. I went and placed them. Then they  called me: we’re changing. Then I had to find arenas again. Sometimes when you can’t put the fight in the arena where it belongs, because this is where everybody’s from and you go somewhere else, you’re going to lose money on your event. You’re not going to draw. That’s to me the greater frustration. We could have a scenario where we knew our dates in advance, we knew our TV dates in advance, it would change a lot. But that’s not the world we’re living in. I got to make the world I’m living in work for me.”