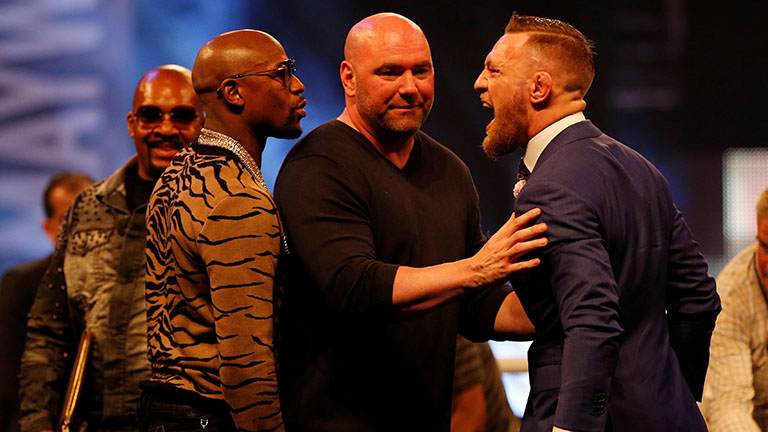 UFC president Dana White denies he made an offer to Anthony Joshua but says 'I have the machine to make him big in the United States,' writes Jack Figg

It’s no secret the UFC’s head honcho promoter has been interested in making a move into the world of boxing, ever since last summer’s mega-fight between MMA king Conor McGregor and master of the sweet science Floyd Mayweather. White continuously wore ‘Zuffa Boxing’ T-shirts fuelling the speculation of a transition from MMA to boxing. White later confirmed to Lance Pugmire of the Los Angeles Times his intentions of boxing promoting: “I’m not leaving the UFC. I’m getting into boxing with [WME/IMG head] Ari [Emanuel] and the UFC will be doing boxing, too.

“It’s still early. We’re still working on it. I’ve got to get my [stuff] together, but I’m getting into boxing, man. It’s coming.”

However, White is yet to make any formal deal to sign or promote within boxing, but this hasn’t stopped the rumours from circling.

The hottest one being that White was targeting unified heavyweight champion Anthony Joshua with a rumoured $500 million offer, however the UFC president refuted these claims at a post-fight press conference in Liverpool last week.

“I never made him [Joshua] an offer” White told reporters.

“We were supposed to meet. But we never met, we never talked money and we never did anything. It was never like I was trying to move in and steal him from [Eddie] Hearn.

“The deal was that I felt we could have a lot of value to them in the United States.

“He’s big in England, everybody knows who he is in England. And I have the machine to make him big in the United States.”

White confirmed he was set to meet with Hearn on March 31, in Cardiff, the night Joshua defeated Joseph Parker to claim the WBO world titles adding to his IBF and WBA belts. However, White revealed due he wasn’t able to make the flight and the meeting is yet to take place.

In the meantime both promoters have been busy cutting deals- the UFC have announced a switch from TV sports stations going from FOX to ESPN while Hearn announced a $1 billion dollar deal with sports streaming company DANZ.

Despite ruling out an offer for Joshua, White didn’t hesitate in addressing another boxing related rumour as he was asked about a potential swoop for Mikey Garcia, and it looks like the four weight-world champion is still wanted.

White revealed, “Mikey and I have got together and few times and I like him a lot and he likes us. We’ll see what happens…”