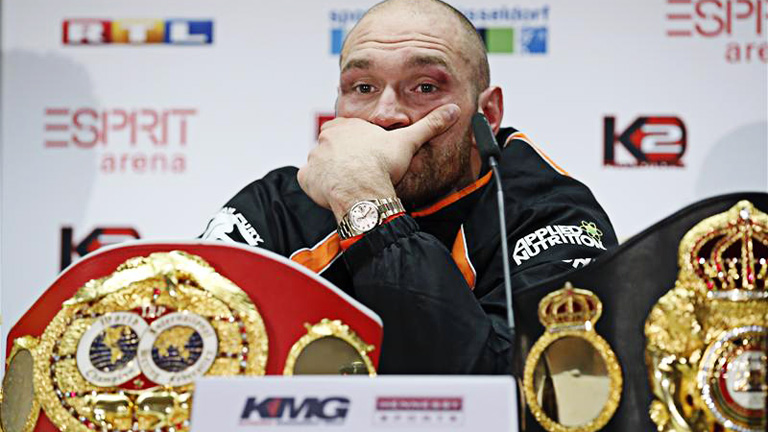 TYSON FURY’S team have reacted to the news that the IBF will strip him of their world heavyweight title should he fight Wladimir Klitschko next.

The IBF confirmed to Boxing News that their heavyweight title will become vacant if Fury faces Klitschko in a rematch, which looks all but confirmed.

Fury won the IBF belt – along with the WBA and WBO baubles – from Klitschko on Saturday and the Ukrainian has confirmed he will take advantage of his option to enforce an immediate rematch.

However the IBF are stating Fury must face Vyacheslav Glazkov – his mandatory challenger – before anyone else and a date for purse bids has been set for December 11. If Fury does not sign to fight Glazkov, he will be stripped.

Peter Fury, Tyson’s uncle and trainer, told Boxing News that they will appeal to the IBF but should push come to shove, they will relinquish the title.

“It’s absolutely scandalous. I’ve not spoken to Tyson yet but we’re dealing with it. But we’ve got a rematch that we’re tied to, we have to take that fight,” he told us.

“A fight of this magnitude, the IBF should only be too happy to be involved in such a megafight.

“We’re going to appeal to them but if they insist on stripping us, then that belt will go in the dustbin because their belt will mean nothing. If they want to treat us with such disrespect then Tyson Fury will go on national television and throw that belt in the bin.

“They’re not giving him the chance to hold that belt, he’s come all this way in boxing to unify the division. It’s a very, very poor start from the IBF to suddenly say, ‘we’re going to strip you,’ when we’ve got obligations to Wladimir Klitschko, it’s all in the paperwork.

Fury is contractually obliged to face Klitschko next, with April/May 2016 the mooted timeframe, meaning that his hands are essentially tied in this situation.

The IBF insist their rules take precedent over contracts signed between individual fighters and should the title become vacant, Glazkov would fight the highest available challenger for it, which is currently Charles Martin.

Fury maintains that if Tyson had the option, he would fulfil his mandatory obligations.

“We’re under legal obligation to fight Klitschko so the IBF are pulling a stroke because they should be waiting to see the outcome of the fight and then Glazkov is next,” he continued.

“If we suddenly wanted to take their route then we’d be in serious trouble, we’d lose all the belts because we’re contractually tied to Klitschko. The IBF should do the right thing, get behind Tyson Fury. As soon as he comes through this he will be taking his mandatory challenger.

“If, in the contract, we were allowed a voluntary we would fight Glazkov without a doubt.”

Indeed, had Fury elected to face WBC champion Deontay Wilder next, the IBF would be more likely to allow him to do so as their rules state a unification fight takes precedent over mandatory challenges.

Egis Klimas, Glazkov’s manager, confirmed to Boxing News that his fighter would not agree to any sort of step-aside agreement and will utilise his challenger status to fight for the vacant title.

“Why should he step aside? He’s worked his way into this position and now he can fight for the title,” he told us.

“The title is what is important to Glazkov, it doesn’t matter who it is against. If Fury steps up, then it will be him, if not, we don’t mind.

“It’s good for the heavyweight division, it means more challengers and more champions. The division has been boring for quite some time now.”