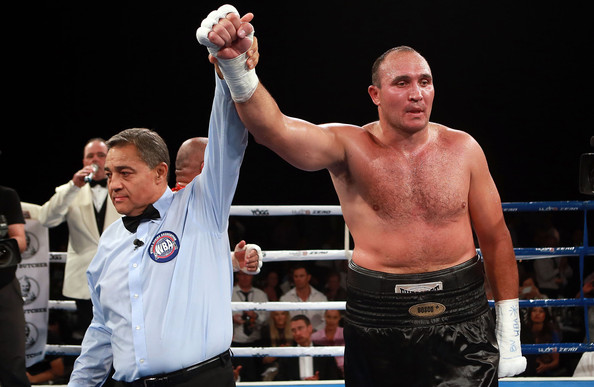 TYSON FURY will face Belarusian Alexander Ustinov – the 6ft 7½in, 22st, giant who Dereck Chisora broke his hand against in sparring – this Saturday July 26 at the Phones 4 U Arena in Manchester, live and exclusive on BoxNation (Sky Ch. 437/HD 490 and Virgin Ch. 546).

Fury was left disappointed when Chisora withdrew from their fight yesterday after breaking his hand against Ustinov in their final sparring session, but promoter Frank Warren has moved quick to ensure all Fury’s hard training hasn’t gone to waste and secured him world ranked Ustinov.

From Minsk, Ustinov has been at Chisora’s North London gym for the last two weeks helping him to prepare for Fury, but now finds himself the man in the opposite corner with the chance of causing a huge shock and inflicting the first loss on the Wilmslow giant’s record.

Ustinov, a former kickboxing champion and MMA fighter, has won 29 out of 30 fights, with 21 ending by knockout and 13 coming inside three rounds. He’s world ranked in two of the major governing bodies: eight in the IBF and nine in the WBA. In his last fight he ended the career of former world title contender David Tua, out-pointing him to win the WBA Pan African Championship. His sole loss was to Kubrat Pulev in September 2012 in a European title challenge.

Hard-hitting Fury, who himself has 16 KOs from 22 undefeated fights, says he’ll take out his anger and frustration on Ustinov for destroying his fight with Chisora.

He said, “The first thing is I’m happy to still be fighting this Saturday and that the fans will get what they paid for and see a good fight. We’ve had a hard training camp and I’m in the shape of my life, expecting to knockout Chisora, but now I’m going to have take it out on Ustinov and make sure he takes the full force of my anger. Chisora will now see what he was going to get on the night – knocked out. Strangely, I’m going to break the man who broke Chisora’s hand. Full credit for Ustinov for taking the fight, he’s a big lad, more importantly he’s a credible world-ranked opponent and he must fancy his chances. We’re two gladiators, but he’s going to feel what it like against a world class heavyweight like me.”

Frank Warren added, “Under the circumstances, Ustinov is a brilliant replacement for Chisora at this late stage. He’s fit and ready after training and sparring for two weeks with Chisora at his gym, he’s got a great record, like Fury he’s giant of a man and has got some serious knockout punch power. Ustinov is world ranked inside the top ten of two major governing bodies and didn’t hesitate about fighting Fury which shows his confidence. Fury’s been preparing for a shorter man in Chisora and he’ll have to adjust his preparations, but with two huge men in the ring throwing big punches, anything can happen.”

Tickets for the show and VIP packages are available through Eventim on 0844 249 1000 or eventim.co.uk

Members of the public who have purchased tickets through Eventim for the event have two options:

1.  Use your ticket(s) for the show this Saturday

2.  Return your ticket(s) to Eventim within 28 days for a refund of the full face value

Tickets used on Saturday may not be used for any future shows. Please note if you return your tickets we cannot accept responsibility for postal charges or loss and recommend secure delivery.