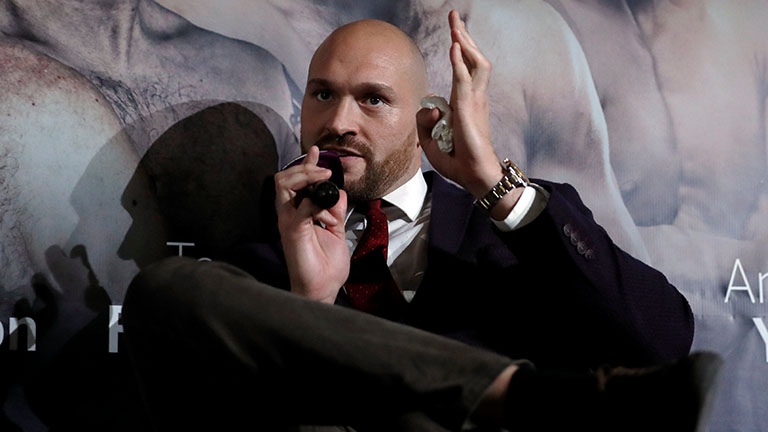 WHAT’S your reaction on today’s announcement?

It’s a massive announcement today for Frank Warren and BT Sport doing a long-term deal, there’s going be some exciting fight nights to look forward to to add to the calendar and they’re kicking off with some big fights already.

With your return announced for June, how many times will you aim to fight this year?

Four fights, I will try and target four fights this year.

You have stated it does not matter who your return opponent is, why is that?

They’re all bums in the shower, whoever it is it doesn’t matter they’re going to get beaten up anyway. Names are unimportant whether it’s Joe Bloggs, Fred Flintstone, Frank Warren, Piers Morgan, whoever wants to get in the ring will get battered.

You have said your return fight is all about you, what did you mean by that?

It’s the return of the Mac so the opponent isn’t important, does it matter? No, exactly. I could fight myself, I could shadow box for 12 rounds and still sell out the arena.

You have been training with your new coach Ben Davison for quite a while now, what stage are you in your camp?

I’ve got six weeks left, I’m already there I’m ready to fight this weekend, but it’s not this weekend I still have six weeks so I’m not going to overtrain, I’m going to take it nice and steady, enjoy the rest of my camp and enjoy being alive.

You said in a press conference Deontay Wilder was your motivation to return, if you could choose who would you fight first between Wilder and Joshua?

It doesn’t matter, they’re both fighters, they’re both good fighters so whoever, either or it’s unimportant to me, I’d beat them both anyway.

Your cousin Hughie is set to return this month, what are his plans for the future?

I have no idea what the guys are doing, to be honest. Obviously they’re going to try for the British title and that’s it. I don’t know what’s going on with Hughie, I really don’t know to be honest. Hopefully he wins the title and he can carry on and fight for another world titleone day.