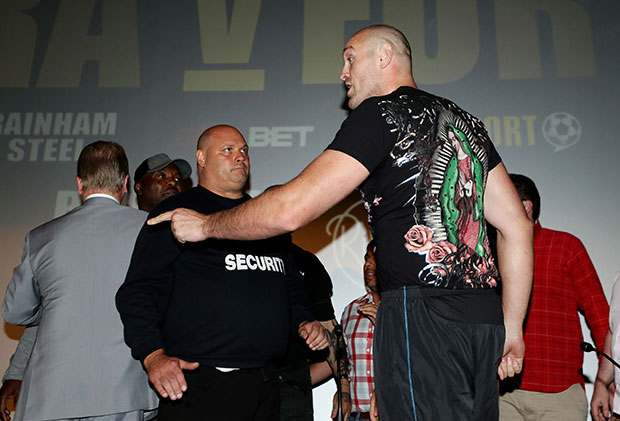 “I WILL always be what I am,” Tyson Fury boomed from within a documentary that was playing at a cinema in Kensington. “A big giant Manchester gypsy.”

Moments later, the big giant Manchester gypsy appeared in the flesh, typically larger than life, and seemingly over-eager to amuse. Undoubtedly, Fury will always be Fury. And with a little under two weeks remaining before his world title eliminator rematch with Dereck Chisora, he took to the stage of the public press conference and allowed his mouth to run wild.

“I’m going to annihilate this mother f*****,” Fury blasted about Chisora during the introductions. “He’s just a journeyman and if I can’t smash him to bits there’s something wrong with me. I’m going to smash his f****** head right in.”

Veteran fight scribe Alan Hubbard told Fury – who declared he had no interest in the British and European heavyweight titles that will be up for grabs – that the incessant foul language was showing little respect to those in attendance, or the sport.

Chisora, a notorious rule breaker in the past, remained calm.

“I’m coming for you,” he said over and over before indulging in a moment of reflection. “Sometimes I wonder how I’m going to be remembered. Some British fighters can’t get to world level. I am determined to get to world level… You [Fury] have not got a clue what’s coming. I asked for the smallest ring and we got that. You are in for a fight. How tall are you? Six-feet-nine? You’ll be five-feet-five by the time I’ve finished with you.”

Fury and Chisora were both so adamant about impending victory a bet was made, and one that breaks the British Boxing Board rules. The sum of £10,000 was rejected by Tyson as “chump change – I spend that in the chip shop” before they left their seats to shake on a £100,000 wager. The theatrics soon descended into chaos. And the longer it lasted, the more uncomfortable it became. Fury demanded to fight there and then. Promoter Frank Warren ushered ‘Del Boy’ back to his seat before his passionate mentor, Don Charles, allowed himself to be drawn in.

As host Jim Rosenthal, an exceptional broadcaster with enviable experience, attempted to curtail the show Peter Fury, Tyson’s uncle and trainer, opted to re-stir the bad taste in the air. The performance concluded with Tyson and Charles exchanging savage threats. The Board have already spoken to Peter and Mervyn Turner (Tyson’s registered manager) about the fighter’s behaviour, and will investigate the bet.

Whether this had the desired effect and injected interest into a fight that has so far failed to capture the public’s imagination remains to be seen. Perhaps Fury – who has publically slammed the promotion of this event – would have been better off embracing the other side of the big giant Manchester gypsy. The one that could be seen after the curtains had closed, taking time to talk to the smattering of fans, with smiles and good manners.