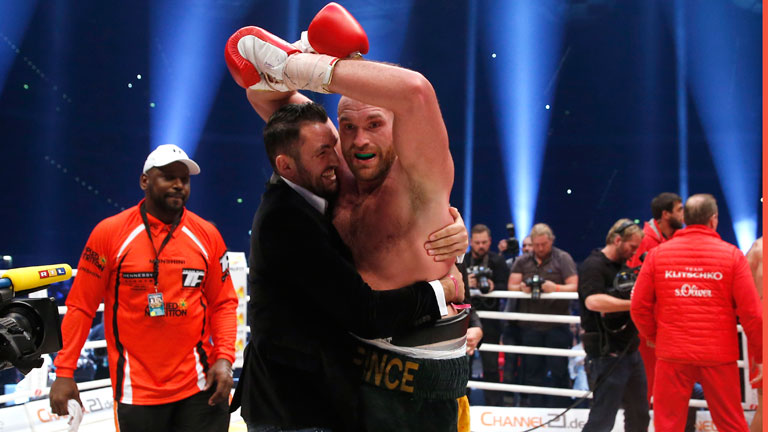 WRITER Elliot Worsell was invited into the inner sanctum of Tyson Fury around the Wladimir Klitschko fight – his account in this week’s issue of Boxing News magazine.

“I’D like some porridge, please,” Tyson said, looking towards Hughie’s bowl. “But not like his.” Hughie’s porridge was a lumpier take on an old tradition and evidently not to Tyson’s liking. “I’d like it smooth, not lumpy,” he continued. “And could I have semi-skimmed milk instead of that soya milk stuff? I don’t know how you eat that, Hughie.”
Hughie shrugged. Eyes sunken, cheeks red, nose blocked, I’m not even sure he knew what it was he was eating. “You look awful,” Tyson offered by way of reassurance. “Make sure you stay away from me, ok?”
The porridge arrived minutes later and Tyson inspected it as though it were a pair of Paffen boxing gloves. A frown formed across his brow. “It’s still a bit too lumpy,” he said. “Can I have it smoother?”
“I’m sorry,” said the waitress, and off she went.
Next time there was a different problem. First came the frown. “It’s cold,” he said. “Can you heat it up again? Maybe for a couple more minutes…”
“I’m so sorry,” said the waitress.
Off the porridge went again, while Tyson turned to Hughie. “We should be careful what we eat in here, shouldn’t we?” he said. “We probably shouldn’t even be eating here actually.”
“Why’s that?” said Hughie.
“The Klitschko camp could try to slip us something in our food.”
“Oh, right.”
“They could give me something that makes me box rubbish on the night.”
Soon enough the porridge was back. Tyson hoped it hadn’t been tampered with, and that it was by now smooth and warm. Thankfully, it was. “I’m sorry for the wait,” said the waitress.
“Don’t be sorry,” said Tyson. “It’s our fault. We don’t speak German!”