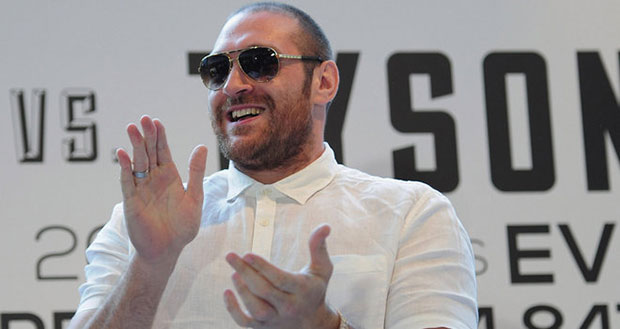 Fury's mouth is taped up but the mischief remains, writes Matt Christie

TYSON FURY mischievously strolled into the press conference to promote the rescheduled November 29 Dereck Chisora sequel with tape covering his mouth. The vow of silence was a reaction to being fined £15,000 by the British Boxing Board of Control for his foul-mouthed behaviour at a presser in July, shortly before the rematch was postponed due to Chisora fracturing his hand.

Promoter Frank Warren admitted some blame for events that led to Fury being punished.

“I should have controlled it better, I allowed it to get out of hand so I take some of the blame for that,” Warren said about the incidents that peaked in distaste when Fury began coarsely swearing at the media at the public event.

Fury’s promoter Mick Hennessy, and trainer, Peter Fury, felt they had been disrespected by the Board because they had not been allowed into Fury’s hearing, but accepted that the punishment – that will come out of his purse for the Chisora rematch – was acceptable.

Throughout proceedings Tyson used his hands to communicate, offering his middle finger when asked how many rounds the rematch would last before adjusting his prediction to two and pointing them in Chisora’s direction.

“Del Boy” – once the bad boy of British boxing and no stranger to a fine – exhibited maturity throughout, even offering sympathy for the size of Fury’s fine.

“I see his point,” Chisora said about Fury’s refusal to talk. “A £15,000 fine is too much in this day and age. What he’s doing is right – I wouldn’t say anything if I’d been fined that much. He has never offended me, this is boxing. We can sit here and be nice and shake hands but when you’re close to the fight, after doing all the training, you’re in a different frame of mind. I could say all those things and go a different way, but I’m not like that anymore.”

Chisora’s injury came while sparring Alexander Ustinov but the Belarusian will not be in used this time. Mariusz Wach, and possibly David Price, will be assist Dereck prepare for Fury.

“I will knock him out,” Chisora said simply when asked for his prediction.

Warren claimed that 12,500 tickets from the 20,000 allocation had already been sold for the British and European heavyweight title fight and WBO eliminator. The return, originally set for July 26 in Manchester, will now take place at the O2 in London and is also set to feature the exceptional British middleweight title matchup between Billy Joe Saunders and Chris Eubank Jnr.