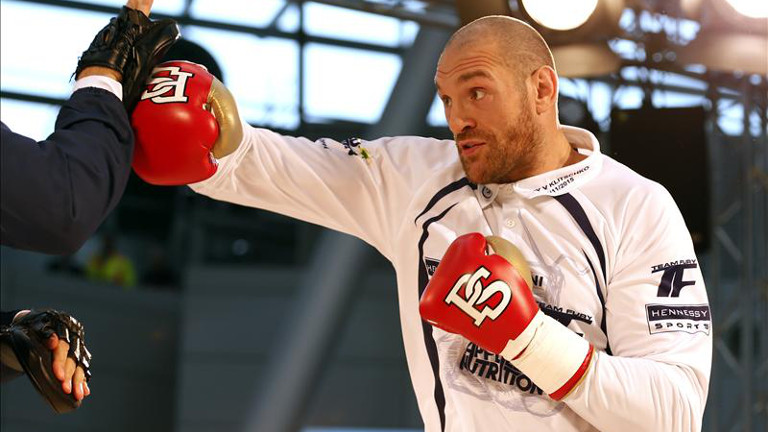 Tyson Fury claims to have lost a stone in weight already

TYSON FURY claims he has shed a stone in weight in nine days of training ahead of his rematch with Wladimir Klitschko on July 9.

The heavyweight king has been providing daily updates from his training camp in Holland via social media, providing fans with insight into how his preparation is going.

Before his training started, Fury stated he had just over three stone to lose to get down to his usual fighting weight of around 18st, and yesterday posted a video claiming he has already shifted a third of that.

“Okay people. Nine days in camp and so far, so good. Just finished my fourth session of the day, just did 12 rounds on the bag,” he said.

“I’m feeling good. Feeling okay. I’ve just got two stone to lose now and I’ve got a lot of time to do it in, so camp is going really well so far.

“I’m training three or four times a day and killing myself in sweat suits and all that. I’ve lost a bit of weight off my face as you can tell. That’s about it really. Everything’s going well”

The unbeaten 27-year-old also underwent some rapid weight loss before his first fight with Klitschko, which he won via unanimous decision, but he picked up a chest infection due to the adverse effect the physical transformation had on his immune system.