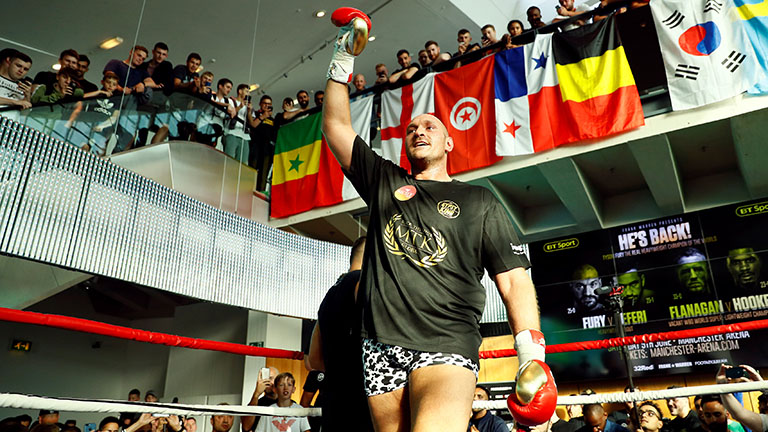 'It’s a great time to be heavyweight,' revels Tyson Fury as he draws inspiration from Roy Jones and Muhammad Ali all at once, writes John Dennen

TYSON FURY has had his dark days, we know that. But he’s also showing a masterful knack for positive reinforcement. “I am the greatest heavyweight of all time, I ain’t got to be modest, I am the best ever, me, Tyson Fury, the Gypsy King, the one and only. When you look at all these fighters today, who’s active, when has there ever been somebody like me?” he proclaims.

It’s hard to argue that Tyson Fury is one of kind. Only his most ardent supporters would compare him to Muhammad Ali, although the man himself finds one particular storyline hard to resist. “You’ve got the lineal champion, the real Mac, who’s been in exile for three years like Muhammad Ali was and you’ve got the other guys who have done their thing in the meantime,” the former champion reasoned. “Once I come back, I am back and then I’ll take over again, just like Muhammad Ali done. Nobody gave him a chance. I’m sure all the journalists and all the boxing pundits around the world are saying after three years I can’t do it again. I shocked you all the first time and I’m to shock everybody for the second time.

“Fans can expect to see me at my best. The most flamboyant heavyweight on the planet.”

That might be a stretch. Fury’s three exile wasn’t due to protesting an overseas war, he was struggling with personal issues and resolving a convoluted anti-doping case with UKAD. But nevertheless, if you hadn’t heard before, Fury is indeed coming back. He wants the other guys, Anthony Joshua and Deontay Wilder, the heavyweights who between them hold the four major world titles. This Saturday, at the Manchester Arena, Tyson fights little known Albanian Sefer Seferi. Don’t expect this opponent to put up much of a challenge but Fury does promise to be busy. He wants to fight four times before the year is out and insists he can challenge for a world title once again in 2018.

Fury has spent time at an event with Roy Jones Jnr and got some words of advice from the American legend. “He just told me not to live a life of regrets. I’ve got a massive opportunity to go down as one of the best heavyweights of all times. I have the dance partners to achieve that; Wilder, Joshua and whoever else. It’s a great time to be heavyweight,” Fury said. “These guys are looking for one right hand all night so I can look like Roy Jones against them. Against the fighters like we’ve got today, the big punching one-punch knockout artists, somebody like me with skill and confidence can look like Roy Jones Jnr in there against a couple of bums and that’s what they will look like if they ever fight me.”

Fury might well look like Roy Jones against Sefer Seferi, Wilder and Joshua of course are quite another matter. It’s a long road still to reach those fights. The first step takes place Saturday in Manchester.