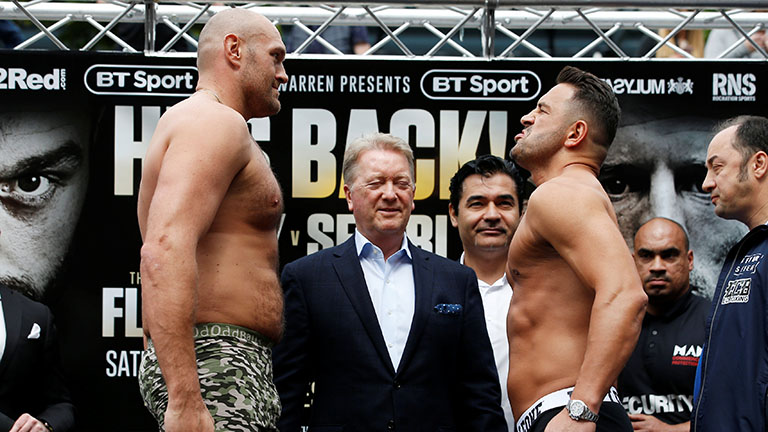 Tyson Fury had to battle nerves and ring rust in an easy win over the undersized and overmatched Sefer Seferi last night, writes Elliot Worsell

BACK in November 2015, the idea of fighting world heavyweight champion Wladimir Klitschko inside a sold-out German football stadium was no big deal in the mind of Tyson Fury. He laughed and joked about it. Sang his way to the ring. Put both hands behind his back.

But ask him to fight an unknown Albanian nearly a foot shorter than him, and five stone lighter, yet do so in Manchester, his hometown, following a two-and-a-half-year layoff, and, well, Tyson Fury’s long legs start to tremble.

That’s according to John Fury, Tyson’s father, who told Boxing News the former heavyweight champion of the world was more nervous for last night’s fight with Sefer Seferi than he has been for any of his so-called “big ones”.

“He was nervous,” John said post-fight. “The crowd made him nervous. He said to me only last night, ‘Dad, it’s a big occasion, I’m in my home city.’

“The pressure was on him because the people expect so much. People are fickle these days. They judge you on what you look like and in boxing you’re only as good as your last fight. They tend to forget what you’ve done in the past and where you’ve come from. They see what they want to see on that day.

“I knew he was nervous in the dressing room. He said, ‘I’ve been waiting two-and-a-half years for this.’ I told him to sit down and he said, ‘No, I’d rather stand up for it.’

“He just wanted to go. He’s been waiting to go all week. He’s been a little bit agitated. And he’s been like that because he hasn’t been in the ring for so long.

“That will get ironed out, like everything else. The ring rust will go as the weight comes down and he’ll get sharper and stronger.”

Incredibly, Fury’s easy-peasy fourth round stoppage of an overmatched Seferi marked the first time the man from Manchester has fought at the Manchester Arena. He received quite the reception, too, a sign once again that absence, irrespective of its reasons, truly does make the heart grow fonder.

“I’m proud of him and proud everyone came out to see him,” said John. “I’m proud of the people of Manchester. They shook me. I was in awe of the atmosphere they produced tonight and the reception they gave my son. The fight was one thing, but the crowd was phenomenal. If I could thank every single one of them personally, I would.

“They must have missed him.”

Similarly, this could apply to Fury and the sport of boxing. Because although he acts up – outside the ring, inside the ring – and appears to delight in breaking the rules and doing everything the manual says not to do, there can be no doubt Fury is a better man with boxing in his life than he is without it.

His father, having seen him at his lowest ebb and feared he’d never again set foot in the ring, knows this as well as anybody.

“It was that bad that I thought it was all over and he’d never lace up a pair of gloves again,” said John. “I thought he was going to be on medication forever.

“But, big up to Tyson, he switched his light back on and got his life back together. You’ve got to understand where he’s been and where’s come from to understand what tonight meant to him and to us.

“At the end of the day, he’s come down from 28-stone and battled depression like you wouldn’t believe. To come back and get a stoppage win against a man who has only lost to a world champion (Manuel Charr, WBA regular) is tremendous. And, you know what, he (Seferi) was a danger and he had 21 knockouts from 23 wins. He got a few digs of his own in there and Tyson needed that. The little man tried well.”

Sefer certainly tried. He offered all his limited boxing ability and six-foot, 15-stone frame would allow him to offer against a man of six-nine and nearly 20-stone. It was comical at times – in a laugh or you’ll cry kind of way – but Seferi, for the four rounds he was alive in the contest, certainly couldn’t be faulted for effort.

“Tyson’s been out for nearly three years – a thousand days – and I didn’t expect much else, to be honest with you,” said John.

“The opponent wasn’t ideal. He was small, and the fight was never going to look pretty or elegant. He didn’t want to fight, the fella. It was in his head from the first round to mess Tyson about and try to spoil and go rounds. Tyson was gaming around in the first three rounds but then he settled down, stung him with a few and the opponent didn’t want to know after that.

“I spoke to Sefer afterwards and he said, ‘Very, very strong man.’ He said he couldn’t take any more. That’s from the man himself. He didn’t run away, he didn’t disgrace himself, but the minute Tyson got serious, he knew he was going to be in trouble.”

With an easy win banked, Fury, 26-0 (19), is no longer an inactive fighter, nor the one-time world heavyweight champion who blew it all and disappeared. Instead, just as the title on the poster suggested, he is indeed back. He’s back in the ring, back making noise, and back, he says, to claim what he never lost inside the boxing ring.

It’s going to be a process, however. That was clear the moment they named Sefer Seferi as his first comeback opponent and it was clearer still after the fight when Fury and his promoter, Frank Warren, suggested the next victim would be of similar ilk, if a little bit larger in size.

“He wasn’t even at 100% when he beat Wladimir Klitschko, so there’s still a lot to do,” said John. “It’s a work in progress.

“What you can see from his condition is he has a bit of weight still to go. We couldn’t take him right down because we wanted to keep his power. We had to leave a little bit on him. We could have got him down to 18-and-a-half stone. But what would that have done to his strength and power? I’ll tell you. It would have dented it.  We couldn’t afford that.

“We knew he’d be able to do 10 rounds no matter what his weight was. He’s fit and strong. But how can you get up for fights like that when you’ve been fighting world champions?

“I want that Manuel Charr (WBA regular heavyweight champion) fight soon as possible for him. If Frank (Warren) can make that fight, we’d love it. He’s the man. He makes the decision. All I can do is try and keep him focused and motivated. He just needs to keep on winning. It’s all about the ‘W’ and that’s what he has collected tonight.”

For now, a win will suffice. Fury, after all, has been without one for close to three years.

But there will come a time, and it won’t take long, when Tyson Fury’s two-and-a-half-year hiatus will have used up its sympathy and patience points and people will expect more from a man who claims to still be the lineal heavyweight champion of the world.

It’s just the way of things. His father’s right – you’re only as good as your last fight.