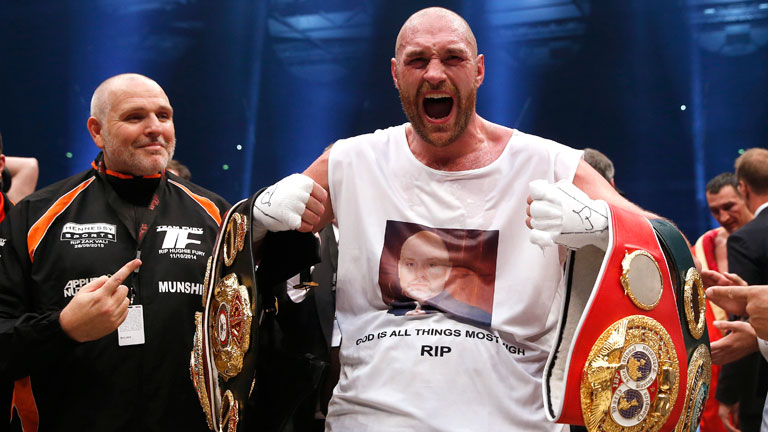 Richie Woodhall, Olympic medallist, world champion and BT Sport pundit, speaks to John Dennen about the state of the heavyweight division, the return of Tyson Fury and the rising stars in the sport

What do you think of Daniel Dubois?

I always said he had a the best jab in Sheffield, a great jab, basic straight punches are excellent. A lot to learn but he’s a kid, he’s a baby so I’m looking forward to seeing him this season.

Were you surprised he turned professional as early as he did?

It is what it is. He has the potential I think to go on and win major honours. I think it’s got to be done in the right timescale because we have a tendency in this country just to expect a little bit too much and rush our boxers and I hope we don’t rush him because he’s only a baby.

Do you think Anthony Joshua was rushed? Even though he passed his tests, it still all happened very quickly.

I think it was a massive gamble but at the same time, he was still mid-twenties when that gamble was taken. This kid’s 19 years of age. We have to remember that. You have to have that acid test where can you cut it, can you make the grade? Anthony Joshua went through that. He did that from the amateurs, from the World championships.

The difference is he was a little bit older. We have to remember that with Daniel.

For your professional career how important was it that you’d done the Olympic Games?

I learned so much boxing Americans, boxing Russians, boxing Cubans, boxing the best amateurs in the world. That helped me, prepared me for the professional game. You have to make adjustments, professional boxing is different to amateur boxing but you’ve still got that grounding and you’ve had the opposition where you’ve fought the very best in the world. Psychologically and physically that is absolutely massive.

Daniel Dubois, I would have like him to have more experience but he had a fair bit and it was all the sparring he did in GB, for me, where he learned more than anything. Because of the likes of Joshua and Frazer Clarke and Joe Joyce. They brought him on a bundle.

How rare is it to have four super-heavyweights in the gym who are that good?

Joe Joyce should be Olympic champion. He was robbed in the final, he’s an Olympic silver medallist. Frazer Clarke I believe will win the super-heavyweight title in Tokyo. I think he’ll win that title. So potentially all four of them could have been Olympic champions. One won it, Joshua, one got silver, who should have got gold.

I think all three have the potential to go on and win heavyweight titles as professionals. Frazer, Joe Joyce and Daniel Dubois. Unfortunately they could all arrive at the same time and it’s going to be fireworks.

So with the retirement of Wladimir Klitschko, heavyweight boxing isn’t in a bad place because there are all these talents coming through.

I really rate this Luis Ortiz. A southpaw, a Cuban, he’s got good technique.

I also like, from a British point of view Dillian Whyte, tough guy, he can fight, will have learned a great deal from the Joshua defeat. I think he’ll be improved when he comes again.

But I would still like to see Tyson Fury box. I think Tyson Fury is a better boxer than what people give him credit for. If he can just retain that hunger, and I think that’s your problem, if he can just retain the hunger he had before the Klitschko fight, then we’re in business with him. It’s that state of mind. I think as a fighter he’s a good fighter, Tyson Fury, it’s a mind issue with him. If we can just get him to that stage where he really, really wants it. Whether he’ll ever get back to that stage. Because he’s climbed the mountain.