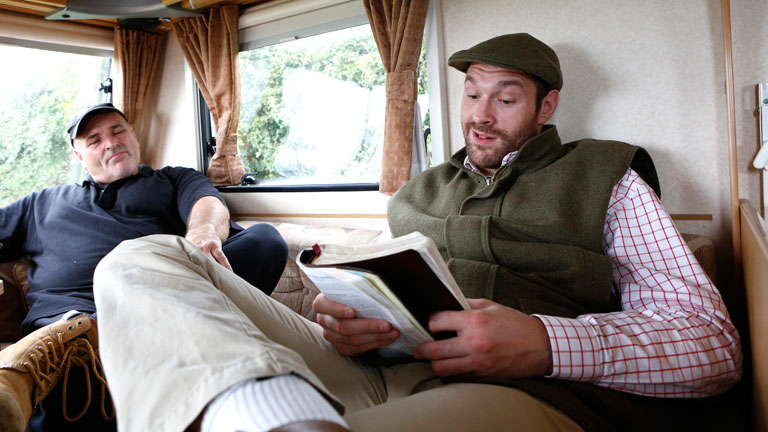 TYSON FURY readily admits he’s not what one would call a good Christian but, as he approaches an October 24 world title shot against Wladimir Klitschko, he is at least using God and his faith in a higher power as catalysts for self-improvement.

“I’m a liar, a cheater,” he confesses. “A proud, vain person. Everything that’s bad I do or have done. We all make mistakes, don’t we? The only thing I ever regret in life is having sex before marriage. If I could erase that then my life would be practically perfect. I regret all the filth that you do with people. I must have had sex with over 500 women, more, I don’t know, I’ve lost count. But it’s pure filth and horribleness. I look at that now as pure disgusting. I’m not a religious person, but I like to help people and do good things. I’m stopping all the bad stuff. I’ve packed in the drinking and going out. I can get up now, go and take the kids somewhere on a Saturday morning rather than being in bed till 12 o’clock.”

Those kids, Venezuela (5) and Prince (four on October 1), are two of the exceedingly few things that warm the often-downbeat Fury’s heart.

“Kids are happiness, they’re a little piece of heaven, pure innocence, no badness at all,” he muses. “I don’t discipline the kids. My kids can do what they want, without breaking stuff up. I put ‘em to bed 30 times and they keep getting back up and running down the stairs. Me daughter won’t have an education because our way of life we don’t need one, especially women. They grow up, they get married and they look after the man. I want my son to have an education because I don’t have one and I’m practically a stupid c***. I’ve learnt meself to read but I’m a s*** writer and speller. I’d like to give my son an education rather than being a hustler. I don’t expect my son to follow in my footsteps. I think he’s got to go to school, get a proper education and go from there.”