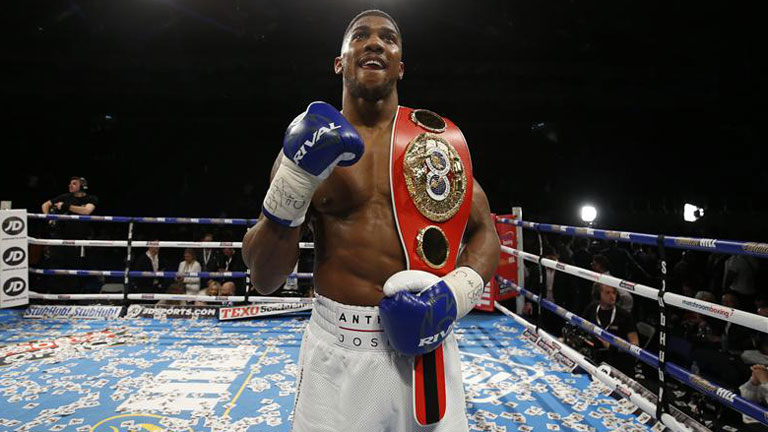 ANTHONY JOSHUA is only a day into his reign as IBF heavyweight champion but he’s made no secret of his desire to fight the biggest names in the sport.

Virtually shrugging off the magnitude of winning a world crown in only his 16th pro bout, speaking backstage at the O2, Anthony said, “I knew I wasn’t losing so I’m calm. The reason why I don’t want to make a big deal of it is when you win, I think you’ve got to keep it balanced and if you lose you’ve got to keep it balanced. You can’t let it get to you to your head when you win and you can’t let it get to your heart if you fail. So you just got to take it as it comes. We work hard. This stuff isn’t by luck, trust me. The attention, the building, the training. The micro-management. If you know me, you know how due diligent I am with my hustle, I don’t play games. That’s why I’m pretty calm because I know what I want and I’ve got the greatest people around me to help me achieve my dreams so I’m not going to let them down neither.”

“We’ve got more to go. Probably when I retire on top I’ll be happy but at the minute I’m still fighting. I’ve got to put this behind me and go on to the next destination,” he continued.

That means working his way towards bigger names than Charles Martin, the champion he deposed with such ruthless ease on Saturday. “You rewind – Foreman, Ali, Frazier fought. Tyson, Holyfield, Lennox fought. Me, Tyson Fury, [David] Haye, it’s just an era that we’re in, we have to fight. We couldn’t go through this era of us guys without fighting. That would be silly. We’ll get it on when the time’s right and everyone comes together and sits down properly. It’s just bound to happen at some stage,” Joshua said.

He promises the title win won’t change his attitude. “As soon as I take a seat someone’s going to call me out again and I’m going to have to step up and defend what’s mine. So just a bit more hunger. Getting there is one thing, now maintaining it is going to be a bit harder so I just need to be a bit more disciplined now,” Anthony concluded.