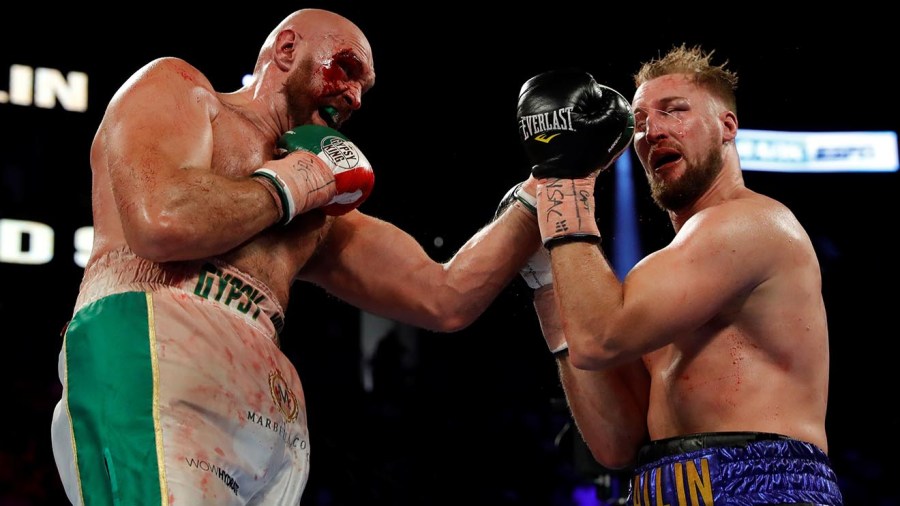 TYSON FURY emerged from a blood-soaked near disaster to unanimously outscore the plucky Otto Wallin over 12 gruelling rounds inside the T-Mobile Arena in Las Vegas. The scores were 116-112, 117-111 and 118-110 in Fury’s favour but a dreadful cut over the Englishman’s eye – caused by a Wallin left hook in round three – left the fight in the balance until the final bell.

This was intended to be another showcase for Fury, one that most presumed would be easy work for the unbeaten Traveller. But Wallin, also defeat-free going in, had other ideas. He had employed a sports psychologist to keep any negative thoughts at bay and his strength of mind was apparent throughout.

After a quiet opening two rounds, bossed but not dominated by Fury, Wallin bullishly charged at his opponent and scored with a left hook in close that bounced off Fury’s right eyebrow.

The former world heavyweight champion – with a February rematch with WBC boss Deontay Wilder supposedly signed and sealed – immediately dabbed at the point of impact. Within seconds, blood cascaded down his face. Should the fight have been stopped as a consequence, and there was genuine concern it might have been, Wallin would have been ruled the winner.

“I had one eye from the third round,” Fury would later explain. “No sense of panic, I’m a gypsy warrior, I’m a gypsy king. You can’t go swimming and not get wet. I enjoyed tasting a bit of blood in my mouth.”

Wallin, too, enjoyed it. The deep wound, which gaped gruesomely, provided a bright red target to aim at. The Swedish underdog (as much as 20/1 with some bookmakers) was suddenly the aggressor and punched, rubbed and pulled at the wound. A smaller cut would later be opened just underneath the original injury, this time from a clash of heads. Fury shouted at the referee Tony Weeks about his opponent’s lack of rule keeping. Wallin, though lacking finesse and speed, was doing everything he possibly could to unsettle the bigger man.

Fury’s trainer Ben Davison implored Fury to keep calm in the corner as the cut man applied vaseline to the wound like plaster to a wall. Huge crimson swabs dropped from Fury’s face at the start of each round, as Weeks watched carefully.

The cut was bad. Plenty of contests have been called off for lesser lacerations. The doctor was called to inspect the damage in round six and indicated the fight could continue.

Fury, to his credit, retained his composure. Throughout the rounds five to 11, his work was by far the most accurate. Excellent uppercuts and body shots from his left unsettled and hurt Wallin. Big, long right hands sent the plucky European back to the ropes. Fury – still bleeding profusely – wrestled, leaned and tried to drain energy from his smaller rival. Yet Wallin never looked like going down.

There would be further drama and unrest for the favourite in the last round. A left cross cannoned into Fury and sent him back to the corner. He ducked and clung on. Wallin could not find the punches to score what would have been a monumental victory. A quicker puncher, a more educated and hurtful puncher, might well have done.

Fury can now look ahead to next year but how long the cut keeps him out of action is unknown. Certainly, it will take a long time to heal and the scars on such a tender part of his face could plague him in the future. Only time will tell if this outing, designed to ease the charismatic 31-year-old into the Wilder sequel, was worth it.

But at least for the fans, of which there were over 8,000 in attendance and countless others watching on television this latest Tyson Fury rollercoaster provided value for money.