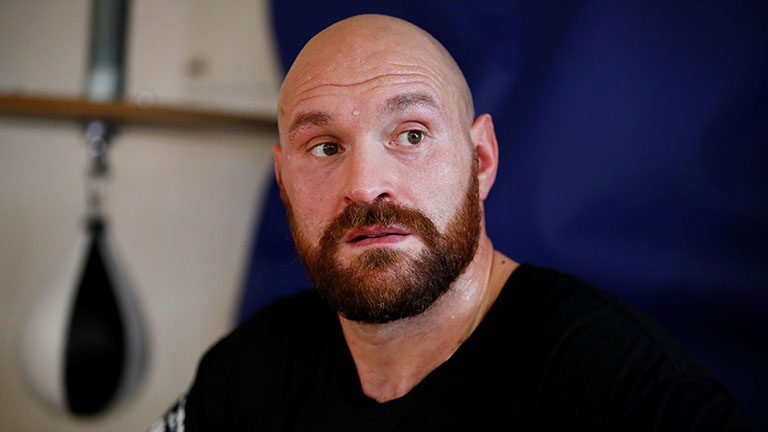 Tyson Fury slates Anthony Joshua and promoter Eddie Hearn as he reveals that he will step in to fight Deontay Wilder. Declan Taylor reports

TYSON FURY has slammed Eddie Hearn and Anthony Joshua for their handling of the Deontay Wilder negotiations, which he says have reduced British boxing to a “laughing stock”.

Fury, who faces Francesco Pianeta at Windsor Park, Belfast on August 18, claims he is on the verge of agreeing terms on a December showdown with undefeated WBC champion Wilder in Las Vegas.

The news comes after Hearn and Joshua failed to lure the Alabama puncher over to Britain for a heavyweight unification before the end of 2018, with a September 22 clash with Alexander Povetkin booked in instead.

Now Fury says he will take advantage of the situation by knocking out Pianeta and then relieving Wilder of his title in Las Vegas.

“Joshua and Eddie Hearn can stick that up their nose,” he said waving his drinks bottle around.

“They’re a pack of s***houses, forgive me for swearing, but they’ve no bottle, no heart and no guts.

“I’m taking this fight [against Wilder] to prove to the British public what they are – s***houses.

“They’re on form, he has had no time off, he’s world champion and he’s supposed to be the golden boy of British boxing and I’ve had to come out of retirement to put British boxing back on the map because at the minute we are a laughing stock.

“The whole of America is laughing at us. It takes the Gypsy King to come out after three years to beat the best fighter out there.

“[Joshua is] picking his opponents, little small men. It just shows you the calibre of the man, [Carlos] Takam gave him all sort of problems and the referee had to save him by stopping Takam when he didn’t have to because he was holding on for dear life.

“But Joshua couldn’t land any punches on Joseph Parker and Dillian Whyte dropped him and nearly knocked him out and he’s a bum. He has been exposed in my opinion and if he does fight Wilder he will get knocked out because he’s useless.

“When you’re a world champion and nearly 30 and you won’t fight other men, for millions of pounds, you’re  a bum and a s***house and you shouldn’t be involved in boxing.

“I was as fat as a pig, I had a lot of problems in my life, and I said ‘offer me the fight and I will take it in two seconds flat’. Wallop. That is what a fighting man is, not afraid to take on anyone. And anyone who does take me on will get flattened. Nobody will be flatten me.”

Hearn, meanwhile, is said to be prepared to offer Wilder $8m to face Whyte in Brooklyn later this year but Fury is not concerned by missing out on a crack at the WBC title.

“Dillian Whyte is a bum, a sausage, he has no boxing ability whatsoever, he is useless.

However, Fury has slammed the brakes on any talk of a potential 2019 showdown with Joshua, even with a Wembley slot on April 13 already booked out.

He added: “The way that Eddie Hearn and Anthony Joshua deal with people, I don’t think that fight’s possible to make – because they’re not fair. If they were fair then they’d be fighting Wilder wouldn’t they?

“They say he’s hard to deal with but I’m telling you it’s very easy to deal with. I’ve never met straighter, nicer people in my life – ever. But when you try and treat someone else like a dosser, and you want everything and to give them nothing then the fight isn’t going to happen is it?

“I’ve told Eddie Hearn that there will be no fight unless they play fair and it’s a level playing field. That’s it. If they don’t want to do that they can go and suck my big, hairy nuts.

“If you can’t be fair in boxing forget about it. It’s a gentleman’s sport – there is no room for crooks and businessmen. Everything has to be fair and straight. There is no skullduggery.

“It’s not about money for me. What’s a few quid? I’m already a millionaire. It’s about being fair because I’ve been fucked over and robbed too many times before in my life. It ain’t going to happen again.

“I’m not interested – at all. It doesn’t even tickle my fancy because when you’re messing with a pair of villains then you can’t do business. It’s simple. Unless you want to fly in a straight direction there’ll be no business.”