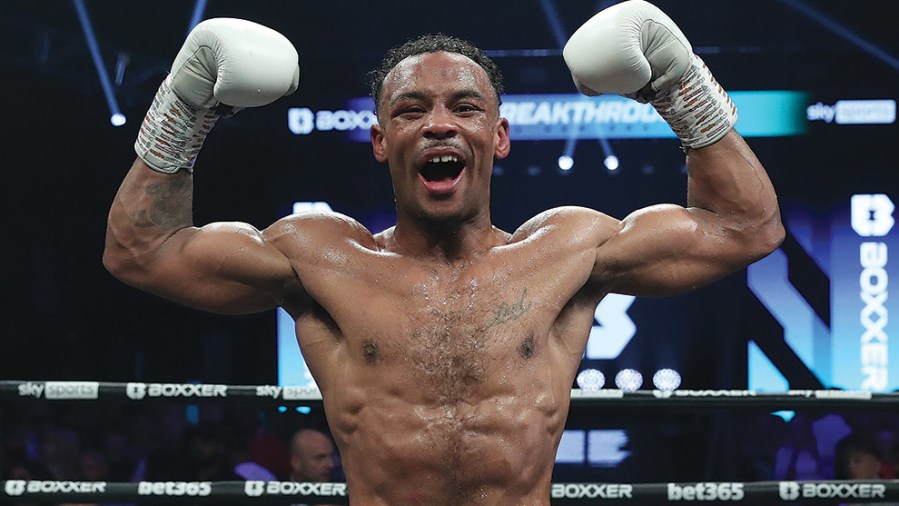 Tyler Denny, the new English middleweight champion, has done things the hard way so far and is now hoping for some kind of security, writes Elliot Worsell

THEY say there is no sport as lonely as boxing, which, if true, means there is perhaps no place lonelier than the away corner on fight night. It is there, after all, many of the sport’s fighters try to win fights they are either not likely to win, not meant to win, or, even if they do appear to win, probably won’t get the win they deserve.

It is there, in the away corner, Wordsley’s Tyler Denny has spent much of his seven-year professional career. It was there last Saturday (June 25) he was to be found once again.

He was that night in Coventry at the Skydrome and across the ring from him was River Wilson-Bent, a middleweight unbeaten in 13 fights whom Denny knew well, having previously fought him in November 2021. He was in the away corner then, too, left to ultimately rue both his slow start to the fight and the technical decision announced when a cut to Wilson-Bent ended the fight prematurely in round seven.

Aggrieved by this, Denny was adamant he would not make the same mistake second time around. His plan this time, in fact, was to outhustle and outwork Wilson-Bent, which, over the course of 10 rounds in Coventry, is precisely what the 30-year-old did, winning the English middleweight title in the process.

“I was happy,” Denny told Boxing News. “Ideally, I’d have liked to box a bit better but, with our styles, I think it was always going to be one of those fights. I just needed to be aggressive, put it on him, and close that gap. But it was entertaining and it was enjoyable being in there.

“I wanted to start quicker this time. Last time I gave him too much space early on. But, credit to him, he was a lot tougher than I thought. I thought if I started earlier, I might be able to get him out of there, but he dug in and he had improved fitness-wise from fight one to two.

“I think if I had fought him like that first time around, he would have been finished. But respect to him. We both knew what we had coming in this rematch and both had to be better. I knew he would be better and I knew I had to be better as well.”

Despite believing he had boxed well on the night, there could be no guarantee he would be rewarded at the bout’s conclusion. This Denny did not need to be told, of course.

“I wanted to stand there full of confidence but after the last fight my confidence had been drained a bit,” he said. “I wanted to try to stop him so I had no issues there.

“When I heard the first scorecard (96-94 to Wilson-Bent), I thought, Oh my God. They had him two rounds up with a point off. I couldn’t see what he (the judge, Steve Gray) was doing there. But obviously the second one went to me, and quite comfortably (97-93), and I thought I must be getting this. It was just relief. This was the fourth time I had fought for the belt and I just wanted to get it over and done with and move on to something bigger.”

Champion at the fourth time of asking, Denny admits there have been times when he has been disillusioned with the sport. A fight in a Sheffield carpark against Derrick Osaze, for instance, was hardly a case of living the dream, nor, for that matter, was he all that enamoured by the £2,000 purse he was paid for travelling down to London to fight unbeaten Linus Udofia in 2019. Yet, if there’s one thing the thriving Black Country Boxing gym and its fighters seemed to be blessed with at this moment in time it’s perseverance and determination in abundance.

“The gym’s active, it’s busy, and it’s full of champions right now,” said Denny. “It’s a good gym to be in. Everyone is pushing each other and we get the results we deserve. Errol Johnson (head coach) should get a bit more recognition for what he has done, but you never hear his name when people discuss all the top coaches in this country. I don’t know whether that’s because he’s a bit anti-social or what, but he deserves massive credit for what he’s doing and has done. Some people don’t even know what he looks like because he’s so private.”

Moving forward, one suspects Denny probably needs the best of both worlds. He needs, on the one hand, the humble, down-to-earth work ethic of his coaches and fellow fighters at BCB, and he perhaps also needs a brighter, shinier and louder platform on which to perform.

“If I can get signed by Boxxer or someone like that, hopefully I’ll be able to get in the home corner a few times,” he said. “Sometimes you need that bit of luck in close fights and being in the home corner gives you that. I know the officials should be neutral, but we all know how it works. If it’s a close fight, it usually goes the way of the home fighter.

“My last four fights have all been away against undefeated people. I haven’t ducked anyone, I’m always willing to fight, but I’d just like a bit more control over what happens. I don’t just want to be waiting for opportunities to arrive.”

Denny, 14-2-3 (0), added: “I’d like the British (title), but there’s a lot of competition for that and a lot of people want it. We’ll just see what happens. If it’s put to me, I’ll definitely go for it, but it depends if anyone signs me. If I do sign for Boxxer, for example, I’d then have to think about the fact (Denzel) Bentley (British champion) is with Frank Warren and BT Sport. There’s always politics involved. Who knows what will happen? I’ll happily defend the English, but I’m always looking to progress.”