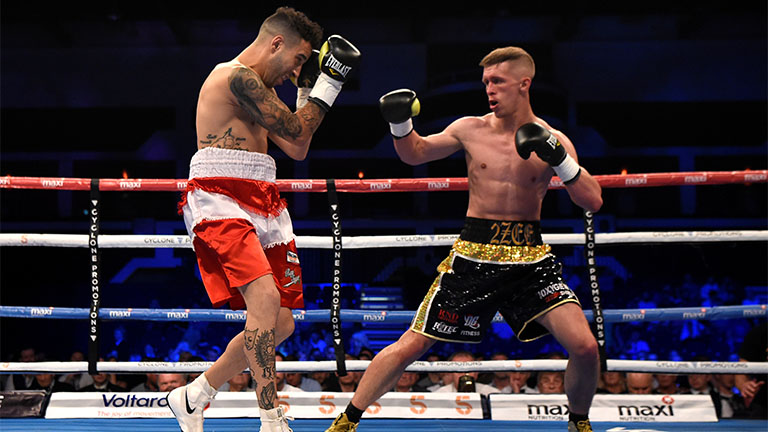 With arguments raging, both title scraps would be worth repeating. Gareth Jones reports from ringside

TWO thrilling, but widely different fights for vacant Welsh titles ended in controversy – one justified, the other less so – in front of a vocal crowd at the LC2.

The first, for the super-feather throne, brought Carmarthen’s Angelo Dragone, with five straight wins, up against popular local Kristian Touze, also unbeaten, but with two draws on his ledger.

A hot favourite, the bearded Dragone began to pressure “2ZEE” from the off, a firm right at the end of the opener damaging his nose. A clash of heads in the second saw Krystian cut near the left eye and generally looking uncomfortable.

The fourth saw Touze, usually able to dictate the pace against compliant journeymen, finally establish his southpaw jab, but it was a brief period of supremacy. From then on the Swansea boxer’s preferred tactic seemed to involve sporadic combinations followed by a step inside to claim his man.

Perhaps the fact that referee Reece Carter never warned him for the holding offered a hint as to his thinking. It made for an untidy, if always compelling bout with Angelo, despite damage near both eyes, doing most of the effective work.

Both tired in the closing stages of a gruelling encounter, but when the Dragone choir began chanting his name in the interval before the 10th and, at the final bell, when Angelo was paraded around the ring on the shoulders of burly manager Richie Garner, there was little response from the subdued Touze support. Then the official announcement: when Kristian was named as a 97-94 winner, there were gasps of astonishment, followed by a cacophony of boos, while the new champion’s backers hugged each other in unexpected joy.

Perhaps the outrage in the camp of the unfortunate loser fed into the same team’s reaction after the other belt battle, at super-middle, when Jake Anthony from Ammanford was edged out by Morgan Jones, despite flooring the Aberdare man in the second.

Jones, confidence clearly dented after two successive losses, looked uncertain early on, as his unbeaten 21-year-old rival worked his way inside to score to the body. Hooks to the head, however, brought the knockdown in a neutral corner, Morgan’s low left hand leaving him vulnerable.

Jones was merely pawing with his leads, but gradually grew in self-belief only for a glancing shot to cut his left eyebrow in the fifth, a doctor checking the wound before letting him continue.

When the Cynon Valley fighter showed no discomfort after shipping a solid right, Jake appeared uncertain and a sharp one-two in the seventh forced him to retreat for the first time. The youngster focused too much on power, allowing Morgan to take control and keep matters at range.

At the end, referee Martin Williams’ 97-95 in favour of Jones produced further ire from the disgruntled red corner, but in truth a one- or two-point margin either way was acceptable in a close contest.

Few would want to celebrate their 27th birthday with a tough 10-rounder, but Tony Dixon, from Mountain Ash, inactive since winning the Welsh crown last October, needed the work. It involved rather more hard labour than he might have expected, Exeter trier Faheem Khan showing fitness and commitment to last the course in a bout billed as a Commonwealth welter eliminator.

Dixon even found himself taking a count in the third, though he seemed to have tripped rather been punched to the deck, and the ringrust was obvious. Tony finished in total command, however, to earn Mr Carter’s 97-94 scoreline.

The Verdict With arguments raging, both title scraps would be worth repeating.