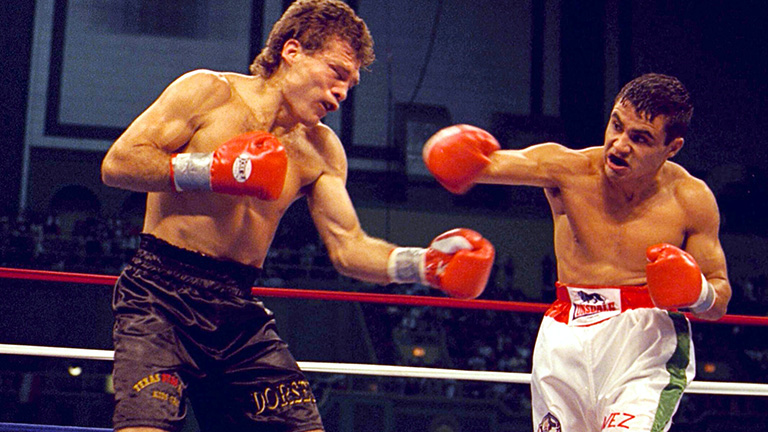 TEXAN Troy Dorsey holds a unique claim: he is the first man in history to have become a world champion in kickboxing and boxing. Now aged 53 and running a successful karate gym in Mansfield, Texas, Troy speaks in a clear voice, giving no indication of the thrilling bouts he engaged in.

A religious man, who has been married since 1986, Troy walked away with a deceptive-looking 16-11-4 (11) ledger but says his Lord and saviour “protected” him, and that is why he is in good health today.

“Both sports are tough, but getting kicked is a whole lot different to getting punched! But I’m fine physically and mentally today.

“I do at times have some memory problems but I don’t think that’s due to fighting.

“I’m just so busy at my karate gym. I have over 400 students, and it’s a lot of work with the phone calls and everything, knowing each one personally.”

A father of two, Dorsey is best known to boxing fans for his two close decision losses with Jorge Paez and a slugfest with Kevin Kelley. He was left feeling as though he had been “ripped off” on at least two occasions.

“The first Paez fight, in February 1990, I won that fight. I don’t want anyone to think Troy Dorsey is a whiner, who complains about his defeats. But I get fan mail to this day telling me I won.

“And the second fight, well, any time you get a draw with a defending world champion, I think that speaks volumes. But I have no hard feelings. I finally won the [IBF] title, so it all came good.”

Dorsey stopped Alfred Rangel in a round just over a year after the return with Paez.

“After all I’d been through with the Paez fights – I had five cuts, with blood all over – I dropped to my knees and prayed when I beat Alfred Rangel. I won in a round but the way I look at it, it took me 25 rounds to become world champion!

“Rangel died of cancer last year, which was very sad. His son and I talk quite a bit.”

Dorsey’s 1992 war with unbeaten Kelley has become a YouTube favourite.

“I threw 1,570 punches against Kelley. With my kickboxing background and the training I did with Casey Malone, who passed away four years ago, I had the stamina to do that. The human mind is the greatest tool we have!

“Again, no bad feelings, but I think I won that fight. To have not gotten the decision after all those punches! I was on him all night but I guess they had big things planned for him. I’m glad the fans enjoyed it.

“That wasn‘t my toughest fight, though – that was Jesse James Leija. I had such a tough time making weight and he gave it everything he had for five rounds, before they wouldn‘t let me out for the sixth.”

Dorsey, hampered by cuts, soldiered on, winning some and losing others after the Leija defeat, before retiring in 1998. Troy didn’t want to walk away.

“I had suffered so many bad cuts, to the point where I underwent surgery,” he said. “I had the bones over my eyebrows shaved to prevent further cuts. I was 35 years old and, let’s face it, I never slipped too many punches!

“When I got cut after the surgery, my parents and my wife, my biggest supporters, wanted me to walk away. The cut in the Oscar De La Hoya fight [in 1993] was especially bad. But the funny thing is, Oscar broke his hand in that fight and he had to punch a different way for the rest of his career.”

Dorsey says he would have been an MMA fighter had that avenue been open to him in his prime years, and he isn’t too much of a boxing fan these days.

“I prefer MMA but I’m proud of achieving what I did in boxing; of becoming a world champion there after I’d won the world title at kickboxing. That was my main goal. I love both sports, but I wanted to make as much money as I could for my family, and boxing allowed me to do that.”