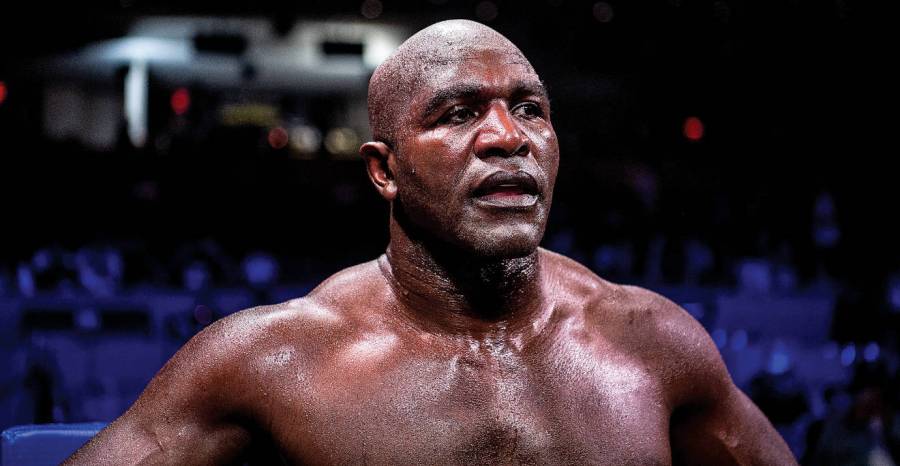 Holyfield getting bashed up at the age of 58 made for depressing viewing, writes George Gigney as he reviews a busy weekend of live broadcasting

BOXING has a fairly extensive history with freak shows, but in recent years they’ve come thick and fast. Floyd Mayweather vs Conor McGregor. The Paul brothers boxing retired mixed martial arts fighters. And so on. But we’ve now crossed a line. A 58-year-old Evander Holyfield being stopped in one ground by former UFC fighter Vitor Belfort wasn’t just a freak show, it was a circus with John Wayne Gacy making balloon animals. It was never a good idea to replace Oscar De La Hoya, who had contracted Covid-19, with Holyfield but it became an obviously grotesque one when footage of Evander hitting the pads emerged from the public workouts. Physically, he looked in terrific shape for his age but it was clear he should’ve been nowhere near a boxing ring. His punches were laboured, his joints stiff. In interviews, his speech was slurred and some of his sentences trailed off into nothingness. Yet still, Triller and the Florida State Athletic Commission were all too keen to throw him in with Belfort. The fight itself was stopped mercifully quickly, though that didn’t prevent some of the commentary team protesting the referee’s decision and claiming the debacle should have been allowed to go on longer.

That Donald Trump – the 45th President of the United States of America – was involved in that commentary team wasn’t the worst part of the broadcast speaks to the disturbing nature of Triller’s event.

Those involved were propping the main event up as something to be savoured, a legitimate boxing fight that people should part with their money to watch. It was diabolical, a new low for boxing.

How can the sport be taken seriously when outfits like Triller continue to put on broadcasts like this? The only positive is that Holyfield wasn’t seriously hurt. It also emerged that, according to sources tapped by reporter Dan Rafael, the contest was contractually agreed to be an exhibition, but this was not how it was packaged by Triller and, more importantly, not how either combatant approached battle.

David Haye also appeared on the bill, outpointing his friend (yes, really) Joe Fournier over eight rounds. He then called out Tyson Fury, who he was supposed to fight in 2013 before an injury ruled him out. Haye is a master salesman who insisted he would only continue boxing if a fight with Fury emerged, though he was also sure to aim a few pointed digs at Belfort during his post-fight interviews, rightfully claiming Belfort had no reason to celebrate in the exaggerated way that he did after beating Holyfield. Don’t be surprised if Triller tries to make Haye-Belfort.

Over on ESPN+, Oscar Valdez was granted a disputed decision over Robson Conceição, capping off a week in which he tested positive for the banned substance phentermine. The fight was clearly very close and Conceição deserved a lot more recognition on the judges’ scorecards than he eventually received, though part of the issue was how biased the commentary was towards Valdez. Andre Ward and Timothy Bradley in particular were adamant Valdez had bossed the fight and throughout the action were quick to praise any sort of success the belt-holder had, while failing to highlight the effective work of Conceição.

Commentary is not an easy job – it’s certainly a lot harder than many fans realise – and there will always be brief moments that get missed, but it happened so many times during this particular fight that one has to wonder whether it was intentional.

Valdez is one of Top Rank’s most prominent names and was very much the ‘home’ fighter on Saturday night, so it’s not difficult to see why the broadcast would try to elevate his standing as much as possible, particularly after the week he’d had.

There was, however, a broadcast worth praising over the weekend; Channel 5’s coverage of the gruelling tussle between Sam Eggington and Bilel Jkitou. Barry Jones on commentary summed it up perfectly; “It’s the sort of fight you love to watch but would hate to be in.”

Eggington and Jkitou knocked lumps out of each other for the entire 12 rounds and it was an excellent spectacle that was available on terrestrial TV; a proper advert for the sport. While Eggington surely can’t keep being involved in brutal fights like this, he is almost always good value and deserves to fight in front of large audiences.

Tyson Fury was in fine form when he sat down with BT Sport for an extended interview, covering a range of topics, including his plans for the next year or so. Fury intends to beat Deontay Wilder in October before fighting Dillian Whyte two months later. He then plans to fight Anthony Joshua twice next year before facing Derek Chisora for a third time. You would have to go back a long, long time to find the last time when Fury was that active so it’s probably best to take his comments with a pinch of salt, though it is interesting that he thinks any Joshua fights would only happen next year. Other than that, he seemed in good spirits and full of energy, which is surely a good sign heading into his trilogy bout with Wilder.

Billy Joe Saunders told talkSPORT that he still intends to retire from boxing, unless a second fight with Chris Eubank Jnr gets signed. It’s still unclear what the long-term effects are of the eye injury Saunders sustained against Canelo Alvarez, but if he is medically fit to fight then a fight with Eubank Jnr makes as much sense as any other. That being said, the hope is that Saunders does not take that fight purely for the money. We’ve seen how that goes far too many times already.