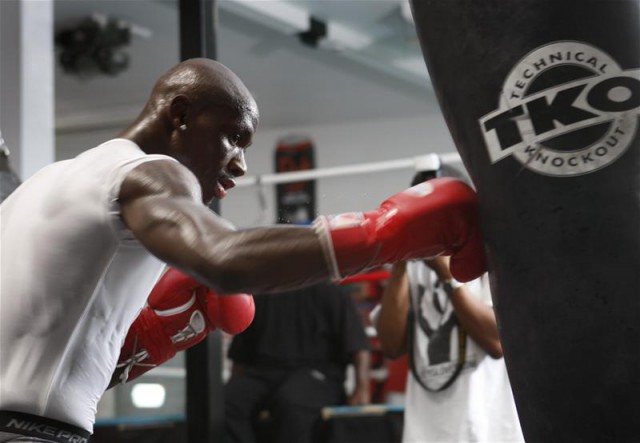 The key and the secret to longevity is defence. I think that’s a lost art when you look at fighters today. Nobody is using the best asset that they have – and that’s their mind. They’re in there and it’s physical warfare and nobody wins in fights like that. You both take brutal punishment and it akes years off your career. They’re crowd favourites but they never recover from the punishment they take. We are in the hurt business but I tell people all the time, just because we are in boxing doesn’t mean we necessarily have to get hit. It’s selfpreservation, your body is a target and you can’t just be putting it in harm’s way. It’s a thinking sport and I figured that out a long time ago.

When I’m in that ring, it’s not about what the crowd are saying; I’m watching my opponent’s two arms, his head, his elbows, every weapon and I’m conscious of everything he’s doing. It’s important because it takes a great, great fighter to come back from being knocked out cold. Once that mettle is cracked they’re never the same and I can truly say my mettle has never been cracked. I’ve lost some fights but I’ve avenged some and a lot of times I haven’t had the opportunity to avenge fights and I’ve really taken care of myself throughout the years. My great trainer Jimmy Williams has always schooled me on being a defensive expert, you can’t take a chance at getting your chin cracked;
it’s a brutal sport.

Rest then dive in

I’m fortunate enough now to have one of the best strength and conditioning coaches out there in Rafael Ruiz; he’s an innovator. The thing about Rafael that I love is that I can come in after being gone three months and he don’t change the workout programme for me. I have to complete it and it’s like I never left; I have to jump in and do the work like everyone else. It’s painful, it hurts and I’m looking for help sometimes but he has no sympathy for me. It’s punishment I have to go through for being undisciplined and not staying in the gym like I should have.

But I think time away from the gym does your body good too because once you peak there’s only one way to go. I let my body get out of shape so I can use those eight weeks to hone it and really get ready for the fight. I don’t have to learn how to box. When I go to camp I can work on my strategy and get into shape. The only problem I’ve ever had in boxing is overtraining and not being in shape.

You’ve got to take your training seriously, make those sacrifices, you got to be serious. You got to have a great coach, a great team behind you.

2 Be strong in the mind

You got to have that mental strength, that willpower, because even in training you’re going to be tested in ways you’ve never been tested before. You’ve got to be able to endure, to persevere and to go though it. A lot of fighters can’t do it because it’s the toughest thing in the world. Boxing is not for everybody; if it was, everybody would be doing it.

I’m always thinking defence – if you ever witness me shadow-box I do my offence but after that I understand that punches are coming back and I work on my defence. My hands are up front, blocking punches to the ribs, counterpunching off those. You don’t just see me throwing punches, you see me slipping, rolling, faking, anticipating and those are the things I do to sharpen my defensive ability. You have to visualise those punches coming, you have to really visualise the defensive aspect of the game.

4 Know when to rest

As a pro you have to be real conscious of the wear and tear you put on your body because you want to be fresh, you want to be peaking on fight night. A lot of times fighters overtrain and it’s very important you don’t burn yourself out. In three rounds you won’t really recognise if you’ve overtrained or not but if you’re fighting 12 hard, long championship rounds it’ll show up in the fight.

I don’t care who believes in me, as long as I believe and I’m willing to do the work and on any given night, I can beat anybody. The biggest part of a fighter is his belief in himself, even when nobody else believes in you. Everything I wanted to do in my life I have done; that’s not by accident.