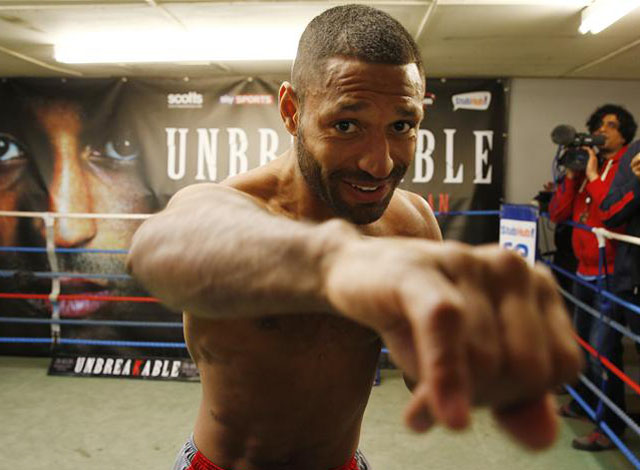 'When there are five Gennady Golovkins, you don't know which one to hit,' reflects Kell Brook, writes John Dennen

KELL BROOK’S impetuous challenge to Gennady Golovkin, the unified middleweight champion, ended in the fifth round when his trainer Dominic Ingle waved the white towel and pulled him out to spare him further punishment.

Brook had fought bravely. Golovkin, in no mood to show any mercy to a jumped up welterweight, was on Kell quickly in the first round. A left hook sank flush into his jaw early on. For an instant Brook sagged beneath it, but refused to fall. In fact he rallied. In the second remarkably he unearthed dazzling combinations, even pushed Golovkin on to the backfoot at times. His fast shots clipped Gennady, who did have some bruising on his face afterwards. But that was nothing compared to how Brook’s face marked up during the fight. Gennady carries terrible power in both hands and he cranked up a remorseless intensity. The shuddering punches began to hurt Brook. His eye started swelling up badly. Gradually it became harder and harder for Kell to keep him off. By the fifth round Golovkin was catching Brook on the ropes, keeping him there and hurting him with chopping punches in close.

Kell however never went down, Golovkin never put him down, at one moment Brook even shrugged as if to defy Golovkin. But he wasn’t getting out of the way and he wasn’t punching back. Dominic Ingle saw he was taking too much punishment and stood on the ring apron, waving the towel frantically to get the referee’s attention and end it in the fifth round. In the heat of the moment the crowd wanted it to continue, it had been a thrilling fight, but Ingle was saving Kell from taking too much punishment. Brook had to be taken to hospital straight after and it emerged that his eye socket was fractured. Clearly his trainer made the right decision.

“I was starting to settle into the fight but I was seeing three or four of them so it was hard to get through it. I was tricking him, his shots were coming underneath and I was frustrating him. I was starting to settle into him but when you see three of four of them, it is hard to carry on,” Brook said. “Believe me, I hurt him. When you’re in a fight, you can see every movement of a fighter and I saw his legs buckle a couple of times. I was starting to settle in. He’s a scary champion, nobody wants to fight him but I would fight him again. He is a great champion. I’m trying to give back to the fans and I hope they enjoyed the fight while it lasted. I wished I could go on but when there are five of him you don’t know which one to hit.

“We’ll go back to the drawing board, go on the machines. I have put a lot of muscle on. I think I’d be more suited to 154lb, I think I would be big and strong. I’d love the winner of Liam Smith v Canelo. I’ve jumped up two weight divisions and boxed a man everyone is running away from. It wasn’t my night, I am gutted because there was much, much more to come from me.

Golovkin denied ever being hurt, though he did take more punches than expected. “I know my style, I respect him, he’s good but not so strong. He just touched but I didn’t feel his power. So many punches but I didn’t feel them,” Gennady said. “I respect Kell, he is real and thanks to his corner, for his career and for his family, it’s correct because I feel it’s game over, it’s finished.

“Thank you very much London. I wanted to bring the drama show because I know Kell is a very good fighterbut sorry, he’s not a middleweight.”

Golovkin of course wants all the belts. “”First of all, I’m a boxer and I’m open for everybody. I want a unification fight. I would like Billy Joe Saunders first of all because he has the WBO belt,” he warned.